As a young boy watches, face pressed to the glass wall, a flood of bubbly white water gushes through the Tidal Surge habitat. As water washes over them, green anemones wave and pink sea stars cling to the rocks. The bubbles subside and the boy stares, enthralled – even before he’s set foot inside the Pacific Seas Aquarium.

Tidal Surge is a brand-new exhibit for Point Defiance Zoo & Aquarium, right outside as guests head down the entry ramp. It shows, with fascinating regularity, how incoming waves and tides bring fresh nutrients to tidal zone animals like anemones, urchins, sea stars and small fish.

But it’s also a metaphor for the surge of community support – such as from Tidal Surge sponsor Port of Tacoma – that took the Pacific Seas Aquarium from dream to reality.

“We’re so grateful to all our fantastic exhibit partners,” says Lisa Johnson, senior development director for The Zoo Society, which helped raise the remaining funds to build the aquarium on top of bond money Tacoma taxpayers voted for in 2014. “Our community really came together to bring the dream of a new aquarium to life.”

Inside, of course, the exhibits brought to life with that community support are incredibly popular with the thousands who’ve come to the Zoo since the aquarium opened in September, 2018: the towering kelp-filled Northwest Waters, the enormous blue Baja Bay with its green sea turtles and hammerhead sharks, the mysterious nooks and crannies of Under the Narrows, the vibrant Puget Sound Color, the giant spider crabs, silvery schooling herring, jelly globe and sci-fi-like basket star.

Plus the Tidal Touch Zone, where visitors young and old can touch spiky sea urchins and soft sea cucumbers, and discover how they live from the intricate watercolor mural behind them. 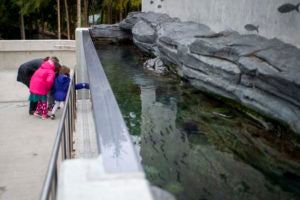 But it’s the Tidal Surge that Zoo guests see first – and the one that’s most like what they see whenever they go to a local beach. By getting a fish’s-eye view of that tidal world, they can also understand and care about the marine animals that share our Puget Sound home, and depend on that gush of fresh, clean water.