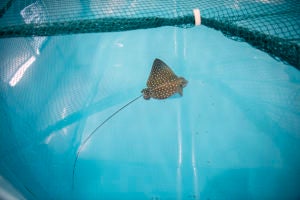 Congratulations are in order for the Pacific Seas Aquarium team – a spotted eagle ray pup has been born in Baja Bay! A female, the little baby ray is doing fine and already eating solid foods, watched closely and cared for in a special behind-the-scenes Aquatic Animal Care Center (AACC) at Point Defiance Zoo & Aquarium.

And yes, we mean born, not hatched. Although rays (and their shark cousins) are a kind of fish, they fertilize their young internally and give birth live. Unlike mammals, though, rays don’t have a placenta. Instead, the embryos live off a yolk sac, which sustains them for the first few weeks after being born.

And then the fun begins.

“Come on, little one,” murmurs aquarist Tyler, stirring up the water a little with a gloved hand and dropping in some chopped shrimp. “Come and try your shrimp.”

It’s a scene every parent can relate to. The pup, born in May in the Baja Bay habitat, was moved to the AACC precisely for this reason, so that aquarists could monitor and make sure she got enough food without competition from hammerhead sharks, hungry fish and other eagle rays. She’s been eating solid food for a while now (rays are born as miniature adults, fully able to swim and hunt), but so far her favorite is clam tongue.

But like human infants, she needs to broaden her palette – and today is the first day for shrimp.

As Tyler watches from above, the baby ray glides over the shrimp pieces and ignores them, flipping one wing briefly out of the water. Tyler smiles.

“We’ve tried squid, too,” he explains, watching the ray closely as she swims. “In the wild, they do eat a lot of clams, sifting through the sand with their nose to smell them out. I’m pretty sure she smells this shrimp. We’ll just see what she does with it. I’m thrilled she’s eating solid food.”

As well as feeding three times a day, aquarists clean the pup’s private habitat, and will eventually give her enrichment items to get her accustomed to sharing her environment. Next door in the AACC an eagle ray pup born exactly a year ago, Nacho, is exploring a wavy green stem of artificial kelp. At around six feet from head to tail tip, with a three-foot wingspan, he’s not yet adult-size (spotted eagle rays can grow to 11 feet wide) but about twice as big as the baby female.

He also now a big fan of shrimp.

The veterinary team visits regularly to monitor the baby ray’s health, and the water quality is tested daily.

Eventually, both eagle ray pups will be big enough to move in with adults, most likely in other aquariums elsewhere to give everyone maximum space.

Suddenly, the baby ray dips down to the floor and scoops up a shrimp morsel in her small mouth.

“There you go!” says Tyler with satisfaction. 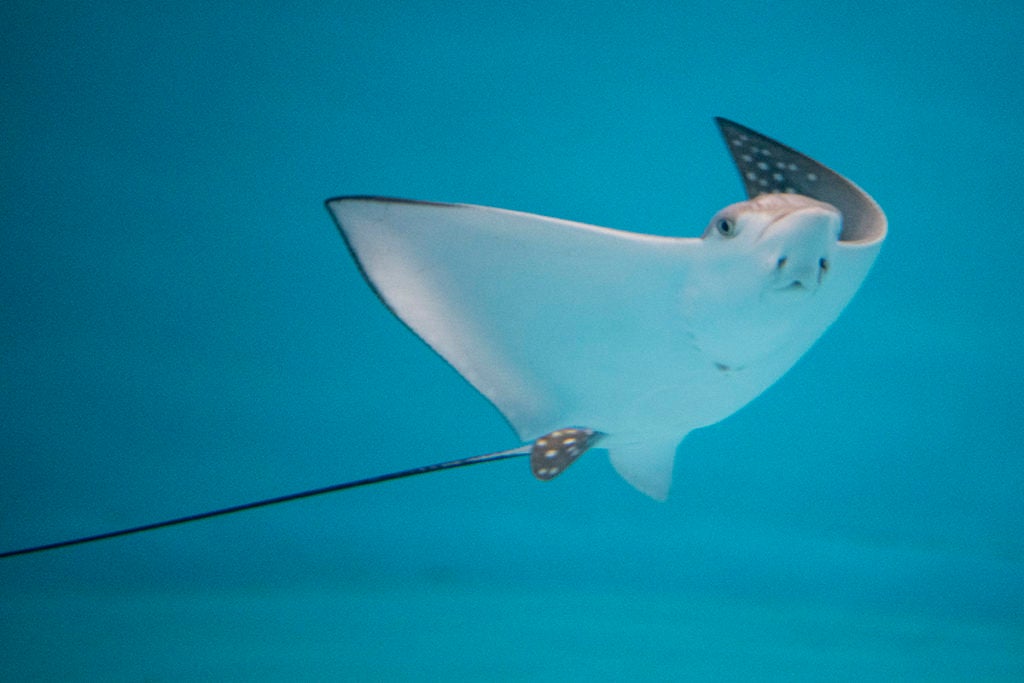