A gentle sea lion, rescued after being blinded by bullets, arrived at Point Defiance Zoo & Aquarium in May and will make his public debut July 3-4 at the Rocky Shores habitat.

The male sea lion, named Björn (pronounced bee-yorn) and estimated to be about 10 years old, was rescued off the coast of southern California in December 2019 and brought to Marine Mammal Care Center, a rehabilitation center in Los Angeles.

Upon examination, staff discovered that Björn had bullets lodged in his head that caused him to go blind, and a scar on his lower abdomen from a likely shark bite. Underweight and non-releasable to the wild due to his blindness, he was named Björn in honor of the famed character played by Alexander Ludwig in the show, The Vikings.

Now, almost two years since his rescue, Björn weighs in at a healthy 400 pounds and is adjusting well to his new permanent home in Tacoma, Wash.

“Bjorn has a second chance, thanks to the dedication and hard work of so many people,” said Dr. Karen Wolf, Point Defiance Zoo’s head veterinarian. “We are grateful for the care he received and are ready to continue that exceptional care at Point Defiance where he will live out the rest of his life in comfort.” 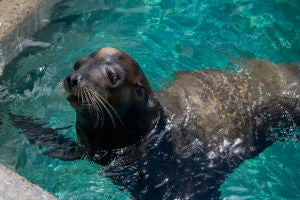 For Dr. Wolf and the rest of the zoo’s veterinary and animal care staff, the focus now turns to doing something that’s new for them: caring for a blind sea lion.

“Keepers are adapting their training for Björn, using tapping noises to let him know when it’s time to eat and other verbal cues,” said Malia Somerville, the zoo’s curator of marine animals. “We all have to think like a sea lion now to meet his needs and provide him with the best possible care.”

Some of his verbal cues include words like “on deck,” “follow,” “up,” “down” and “back.” The word “water” lets him know when he’s close to his pool as he navigates his new habitat. Keepers also are training Björn to participate in his own medical care, like voluntarily allowing veterinary staff to take blood draws. 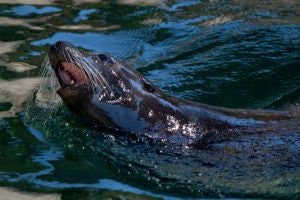 Björn is expected to get along well with the zoo’s three other non-releasable sea lions. Marine Mammal Care Center President Amber Becerra said Björn bonded with many of the center’s rescued pups, acting as a surrogate mother, while he waited for a permanent home.

“He’s a very special animal to us and we’re thrilled that Point Defiance is able to provide a home for animals, like Björn, that cannot be released back into the wild,” said Becerra.

California sea lions range from the waters of Prince William Sound in Alaska down through the Puget Sound region, all along the western coast of the United States and into Mexico. Their diet includes rockfish, salmon, anchovies, krill and squid, and they in turn are hunted by sharks and orcas.

While sea lions are not a threatened species in the wild, they are affected, like all marine mammals, from human-caused pollution such as oil spills, toxic chemicals and plastic debris, as well as human harassment. It’s a federal crime to hunt, kill, capture or harass sea lions and other marine mammals under the Marine Mammal Protection Act.