So you think you like seafood? How about 1,064 pounds of it every week?

That’s what’s on order at Point Defiance Zoo & Aquarium, where everyone from sharks to sea stars has their favorite ocean-based food. Two aquariums, the entire Rocky Shores habitat and even animals in Kids Zone all need seafood for their daily diet – which makes it all the more important that it’s sustainable, caught in a way that doesn’t harm species long-term.

And that’s where keeper Cindy comes in.

“It’s a big, complex order,” says the keeper at Rocky Shores, who handles all the seafood ordering for the Zoo. “We want to get the best value and quality, but also the most sustainable.” 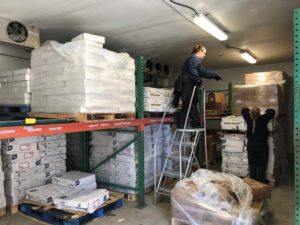 First, because the Zoo is a governmental agency, the annual orders are put out to bid for the various seafood needed: herring, clams, mussels, shrimp, squid, krill and more. Cindy looks carefully at both price point and where the food is harvested from, comparing each to its rating on the national Seafood Watch website. Run by Monterey Bay Aquarium, the site makes recommendations for seafood choices that protect, rather than harm, marine species.

“If it’s on the “Avoid” list, we don’t purchase it,” she says, referring to ocean populations that are at risk of disappearance from overfishing, climate change or habitat loss (such as Pacific bluefin tuna or any kind of shark).

She also tries to support local Pacific Northwest businesses where possible, like clam and mussel suppliers. Not only does this keep local people in jobs, it reduces climate impacts by lessening shipping distance.

But as well as being good for ocean species, sustainable seafood is also good for Zoo animals, keeping them healthy.

“Shrimp is in high demand, and important roughage for our sea otters,” Cindy explains. “We buy a farm-raised shrimp which is sustainable and has no chemicals. That’s not only good for our animals but helps protect our ocean.”

For so many Zoo animals, seafood is the primary (or only) diet: clams are beloved by the eagle rays in the Pacific Seas Aquarium, smaller fish and invertebrates eat krill, and lots of animals eat herring, from polar bear to puffins.

In fact, the total seafood order for the Zoo in 2021 was a whopping 55,411 pounds – which leads to another challenge for Cindy and her team – storage.

“We order it yearly and store it offsite at a cold-storage facility,” she explains. “Then every three months we have some delivered to the Zoo.”

When the fish truck arrives, it takes keepers three hours or more to unload the frozen boxes stacked on pallets and transfer them to the massive cold-storage areas in Rocky Shores, the South Pacific and Pacific Seas aquariums, where they get sorted daily for everyone’s diets. But even here, Cindy is thinking sustainability – at the Zoo’s request, at least one of the suppliers has changed to packaging fish in 12-pound boxes, producing less waste. Leftover fish is composted, rather than sent to landfill.

“It’s all about being sustainable to care for our environment, protect the ocean and save endangered species,” says Cindy.

JOIN IN: Do you eat seafood? Make sure you know where yours is coming from and check it on the Seafood Watch list at seafoodwatch.org. Learn more about protecting sharks and how to protect other endangered species. 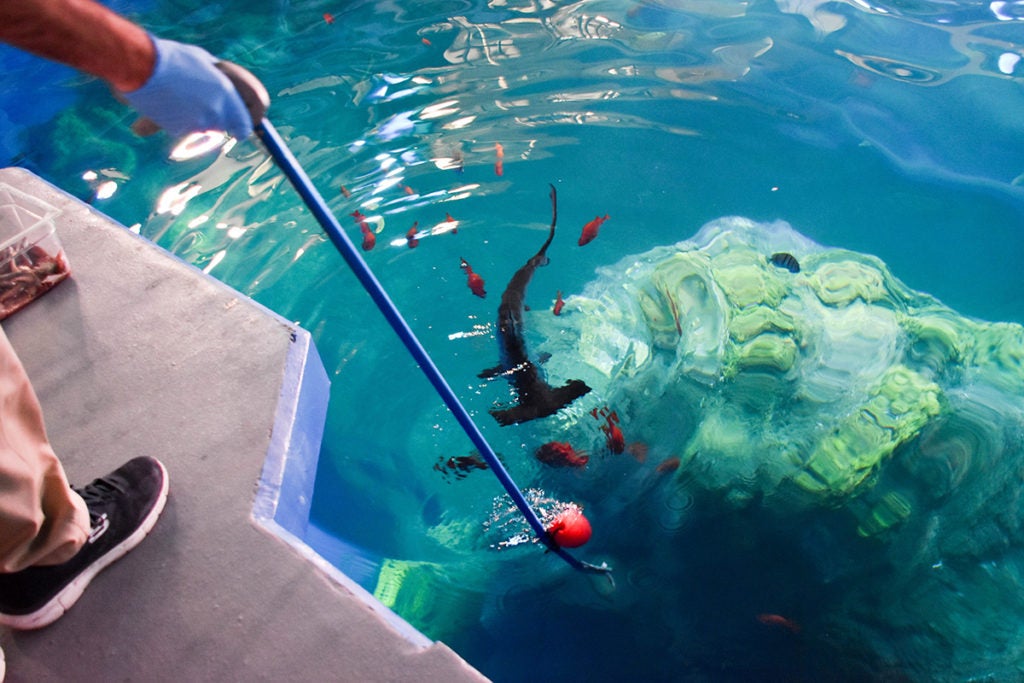