Welcome, Raja! A new endangered Sumatran tiger made his public debut June 19-20 at Point Defiance Zoo & Aquarium – and although he is named after the Indonesian word for king, the 2-year-old tiger is actually pretty laid-back.

“Raja is a laid-back cat who loves to roll around in the grass and closely observe the other animals,” said Asian Animal Curator Telena Welsh. “He has quickly become a favorite among staff and is a wonderful addition to our tiger streak.”

The 295-pound tiger came to Tacoma in May from Topeka Zoo & Conservation Center on a recommendation from the Species Survival Plan® for Sumatran tigers, a cooperative program among zoos that helps create a genetically diverse, self-sustaining population to guarantee the long-term future of the big cats. The plan calls for Raja to father cubs with any of the zoo’s female tigers: Kali, 8; Kirana, 6; or Indah, 6. (At two years, Raja is not yet old enough to have fathered a litter of cubs.)

“We’re working hard to protect and boost the population of this critically endangered species, and Raja’s genetics are very valuable,” said General Curator Dr. Karen Goodrowe Beck, who holds a Ph.D. in reproductive biology and serves as the Species Survival Plan coordinator for all tiger programs in AZA zoos.

Sumatran tigers are critically endangered, with only about 400 remaining in the wild on their native Indonesian island of Sumatra, and their low population is due to habitat loss and fragmentation, poaching, tiger-human conflict and loss of prey. There are only about 75 endangered Sumatran tigers in accredited zoos in North America.

Point Defiance Zoo is a recognized leader in the conservation of Sumatran tigers and other endangered species. Donations of more than $67,000 since 2012 to The Zoo Society’s Dr. Holly Reed Wildlife Conservation Fund have helped support efforts to mitigate human-tiger conflict and to catch and prosecute poachers in Sumatra.

“Point Defiance has been an active participant in tiger conservation and education for many years,” said Dr. Goodrowe Beck. “We are proud to be part of the conservation community working to ensure this species is around for future generations.”

Visitors can look for Raja as he rotates with other Asian animals around the five habitats of the Asian Forest Sanctuary this weekend. Keepers around the Zoo give unscheduled Keeper Chats. Timed online tickets are still required, including for members.

To learn more about tiger conservation and ways to help, go to pdza.org/save-tigers. 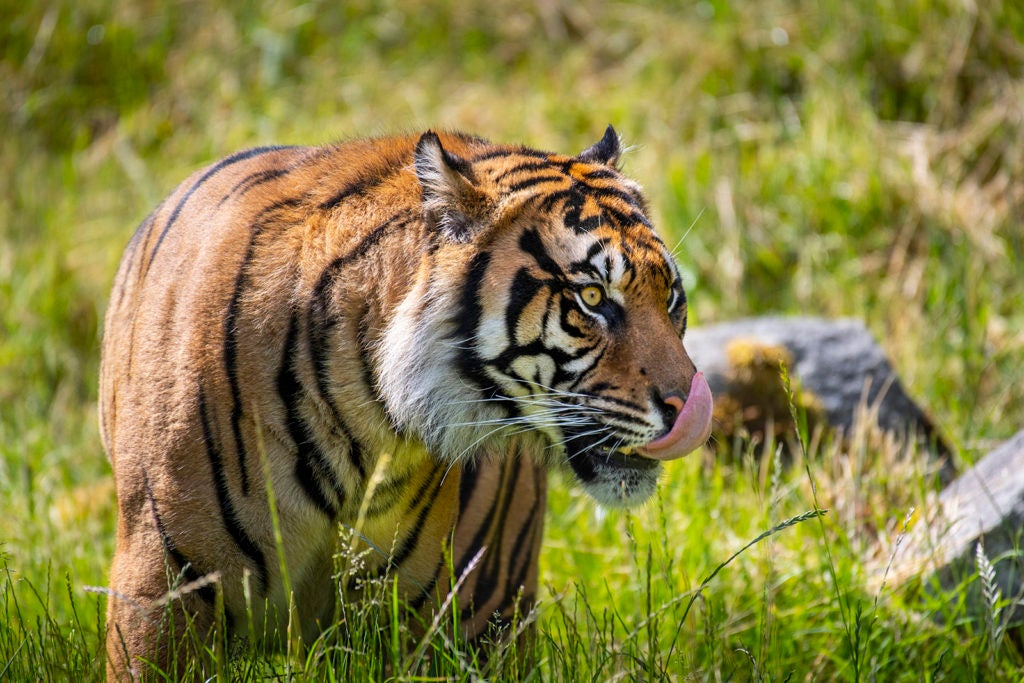