What can one person do?

Actually, quite a lot. There are many actions large and small that any person can do to help save species – and if we all do them, we could change the planet. Start now.

Grit City Carnivore Project
Studying urban wildlife.
Point Defiance Zoo & Aquarium is partnering with University of Washington, Tacoma and Northwest Trek on a citizen science project – reporting sightings of carnivores like coyotes and raccoons in the Tacoma area on the iNaturalist app. Join us!
Learn More

Palm oil is a form of vegetable oil, produced from the fruit of the oil palm tree, that you likely eat or use every day. It is a common ingredient in thousands of foods, household cleaners, cosmetics, and other personal care products, from peanut butter to lipstick.

Some is produced in ways that sustain wildlife and support the local economy. But some involves cutting down swathes of rainforest.

Join us in asking companies to use only deforestation-free palm oil that is produced without destroying any wildlife habitat.

As a consumer, you can have a powerful impact by sending a letter, email, or tweet directly to a company.

See this Palm Oil Buyers Scorecard and check out how your favorite brand is doing on sustainable palm oil use.

Get the scorecard
Get the app

Get the Cheyenne Mountain Zoo’s mobile app for sustainable palm oil products – and take it shopping!

Sharks are beautiful animals that have roamed our oceans since before the time of dinosaurs. But every year, millions of sharks fall victim to the horrific practice of finning. The fins of the shark are cut off and the rest of the shark is discarded in the sea to die. 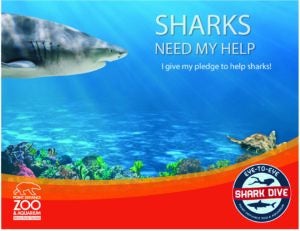 Use your Seafood Watch card or visit the website to choose sustainably harvested seafood – a practice that avoids the unintended capture of sharks.

Here are two things that you can do to idle less the easy way:

Why should we stop idling?

Carbon dioxide is emitted by vehicles and other machinery as fuel is burned. According to the Environmental Protection Agency, every gallon of gas you use produces about 19 pounds of carbon dioxide.

When there is too much carbon dioxide in the atmosphere, it acts like a blanket, trapping the sun’s heat. This extra heat can change a habitat so much that some of the plants and animals that depend on that habitat can no longer survive there.

Find out about Actions with Impact from Polar Bears International.

Find out more about climate change from these awesome websites:

Washington State Department of Ecology – Clear and concise explanations of global warming, climate change and the impacts on humans and wildlife

As the climate changes, people and animals depend on healthy plants for habitat, food, clean air, carbon absorption, even protection during natural disasters like earthquakes (they mitigate landslides) and tsunamis (they reduce wave force and offer shelter).

Yet plants are also threatened by climate change – they can’t migrate as fast as animals when it’s too hot or dry. We’ve filled our Zoo with a myriad of plants and ecosystems that benefit animals and humans alike. Explore ours – and plant your own to help slow the effects of climate change.

Plastic-Free to Save our Sea

Humans generate about 300 million tons of plastic each year – and 8 million tons end up in the ocean. These plastics, like bags, straws, and bottles, flow into the ocean from storm drains, litter, landfills and recycling stations. 80% of ocean trash starts on land.

Help us by bringing a reusable water bottle and lunch packaging on your visit!

We’ve joined Surfrider Foundation, Pierce Conservation District and Metro Parks Tacoma to support Ocean Friendly Restaurants in Tacoma and beyond. By making changes to food service – like eliminating plastic bags and straws – and energy habits, local restaurants can have a huge impact on our ocean, and inspire customers.

Every day in the U.S., 500 million plastic straws are used once and thrown away – and many end up in the ocean, choking animals and polluting the water.

Don’t let yours be one of them. Help solve the problem and Go Straw Free. It’s easy, whether you’re a business owner or consumer.