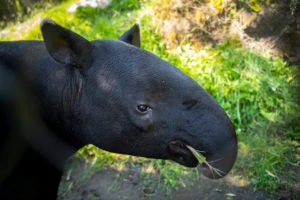 At 686 pounds, Kazu doesn’t have long to go before he matches his dad Baku’s 705 pounds. Like most males, they’ll stay smaller than mom Yuna, who weighs in at 791 pounds.

The other thing Kazu’s nearly matching is his parents’ coloring: He’s almost completely grown out of the speckledy white-and-black watermelon spots tapir calves are born with to help them camouflage in dappled forest undergrowth. Now he has the adult tapir black front and white saddle stripe – with just a few faded white specks left on his chest. 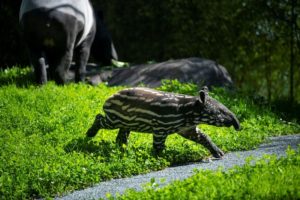 And his hormones are kicking in: Male tapirs mature sexually at three years old, and Kazu is starting to respond like one at times.

The first tapir calf ever born at Point Defiance Zoo, Kazu is himself recommended to breed under the Species Survival Plan for the Association of Zoos & Aquariums, although he’s staying in Tacoma for now.

Around 6-8 feet long and 3 feet tall, Malayan tapirs live in the dense tropical rainforests of southern Burma, Malay Peninsula, southeast Thailand and Sumatra. Herbivores, they use their long nose for foraging leaves, and even as a snorkel for swimming – Kazu loves splashing in the pools in the Zoo’s Asian Forest Sanctuary. But tapirs are also endangered from poaching and habitat loss. 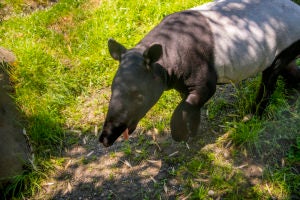 While Kazu might look like an adult, he still acts a lot like a big kid, says Welsh. He has plenty of energy outside, and of all three tapirs he’s the one that loves scratch-down sessions with the keepers the best.

“They’ve cultivated this very trusting relationship with him, and he really responds to tactile sensations,” explains Welsh. “In some ways he’s like a giant baby still.”

While Kazu’s in excellent health, keepers pay special attention to his feet – like any weighty hoofed animals, those need to be in great shape. Kazu gets pedicures twice a week, with careful monitoring by keepers.