When keeper Monica signed up to become a zookeeper, she knew it wouldn’t ever get boring – but caring for animals in Point Defiance Zoo’s Kids’ Zone took it to another level.

“We catch up on the animals, divide up the staff duties for the day among the three main Kids’ Zone areas plus Red Wolf Woods,” explains Monica.

Today, she’s in Animal Avenue, an area where meerkats, lemurs, reptiles and amphibians surround a central kids play area. After the team splits up, Monica checks on all her charges, monitoring their health, feeding breakfasts and cleaning habitats if necessary.

“Reptiles are pretty clean,” she says.

After break it’s diet prep time. With multiple species and food needs, the prep kitchen is lined with white boards, charts and calendars for everyone’s meals and duties. Tubs line the shelves, marked with different species, while different-sized bowls full of chopped produce sit on the counter like a Goldilocks theater set.

“It’s a lot of chopping, but some cooking too, since our ring-tailed lemurs are older and need soft food,” Monica explains. “I feel like chef most days! There’s so much great variety in the veggies, like beets and sweet potato.”

Some Kids’ Zone animals, like the reptiles and amphibians, only eat three days a week, but today is food day for the Magnificent and White’s tree frogs. Monica wheels their habitat around from the public-facing window (revealing a very curious child on the other side) and measures out some live crickets, dusting them with vitamin powder as she goes.

Then, seated on a low stool like a librarian at storytime, she slides open the habitat door and delicately offers a cricket with some long tweezers.

With splayed yellow fingers, the biggest Magnificent tree frog swats clumsily at the cricket, who jumps swiftly away. The frog looks up expectantly at Monica for more.

Do they ever jump out?

“When they were young, yes,” she replies, offering him another cricket which he gobbles up. “But now they know they get food when they’re inside, so they stay there.”

After everyone’s fed, Monica fills up a tub a few inches deep with tepid water, then reaches in to get one of Kids’ Zone’s very special inhabitants: Griddle. A pancake tortoise with limited mobility in his back legs, Griddle benefits a lot from physical and hydrotherapy each week – and Monica, who’s had physical therapy of her own, can definitely relate.

With gentle hands she lifts Griddle out and sets him in the water, watching carefully. He paddles around the tub with his front legs, looking around with bright, beady eyes.

“It helps with his mobility, and I do think he likes being in there,” Monica says, then encourages Griddle. “Look at your swimming, buddy!”

Next, it’s physical therapy time. Holding the tortoise securely with one hand, Monica gently stretches out one limb at a time, counting to five. Griddle’s clearly interested and quite comfortable.

“Tortoises are some of my favorite animals,” explains Monica. “They have so much personality. And Griddle’s my favorite.”

But Monica has another, more somber reason to prefer tortoises – they live longer, some between 50-100 years, unlike some other species in Kids’ Zone.

“Losing animals is a really hard part of being a zookeeper,” she says, as she gently puts the old tortoise back into his habitat and offers him a leaf. “It’s hard. I really bond with them.”

After lunch with the Kids’ Zone staff team, it’s time for a Close Encounter – of the animal kind.

Monica lifts out Mover the box turtle from her habitat, zips her up in a padded black shoulder bag and heads outside, saying hello to nearby guests.

“Oooh look!” cries one mom, pointing at the bag, and calls her kids over to follow Monica.

It’s a hot summer’s day, but that doesn’t faze either young Zoo visitors or Mover. As Monica lifts the 14-year-old turtle into the sunshine she stretches some limbs and cranes around to look.

Monica introduces Mover, explaining her backstory (discovered inside a pair of socks at Seattle-Tacoma International Airport as part of the illegal pet trade) and patiently answering questions from diet to poop. As the kids move off, two older youths come up and Monica expertly shifts to explaining the “box” name: when scared, these turtles can completely seal themselves off inside their rectangular shell.

Then she packs Mover back into the bag and heads inside, waving goodbye.

“It’s better for guests to have several short Encounters with different animals,” she explains.

Of course, training to handle and present so many different species is a big part of the zookeeper job. Monica became a keeper later in life, getting her degree, internships and work experience in her 30s. Once in Kids’ Zone, she then learned how to give Close Encounters by shadowing, then taking on just the handling, then the talking roles. It’s a side of zookeeping she really missed during the pandemic closures.

But the other part is the animals themselves, says Monica, as she finishes up prepping diets before the final team meeting at 4:30pm.

“This is a very physical job, especially in the heat,” she says. “But at the end of the day I know why I do it. I do it for the animals, to care for each one every day.” 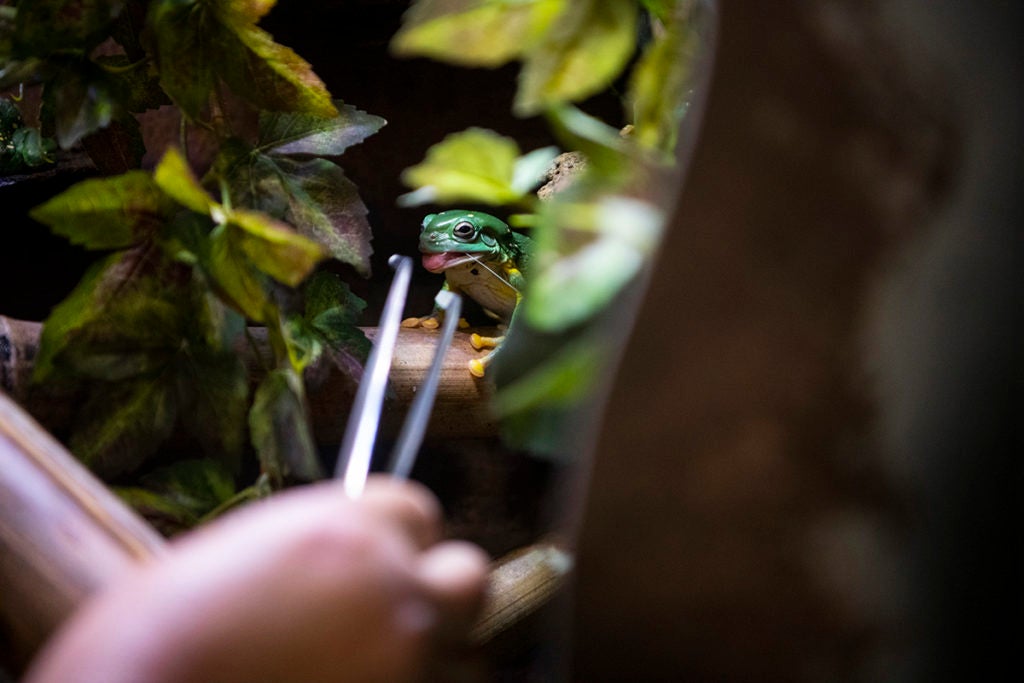