If you have children at home, it’s likely you’ve heard the song “We Don’t Talk About Bruno” from the Disney movie Encanto. And if you don’t have children, you may have still heard it. The song is number one on the Billboard Hot 100.

But, here at Point Defiance Zoo & Aquarium… there are many reasons to talk about Bruno!

Bruno, a 25-year-old Atlantic green sea turtle, joined the Zoo’s two other turtles, Sunny and Azul, in the Pacific Seas Aquarium in 2020. We caught up with aquarist Melissa to talk about Bruno.

“Bruno has definitely settled in!” said Melissa. “He is very independent and thinks he’s the boss.” 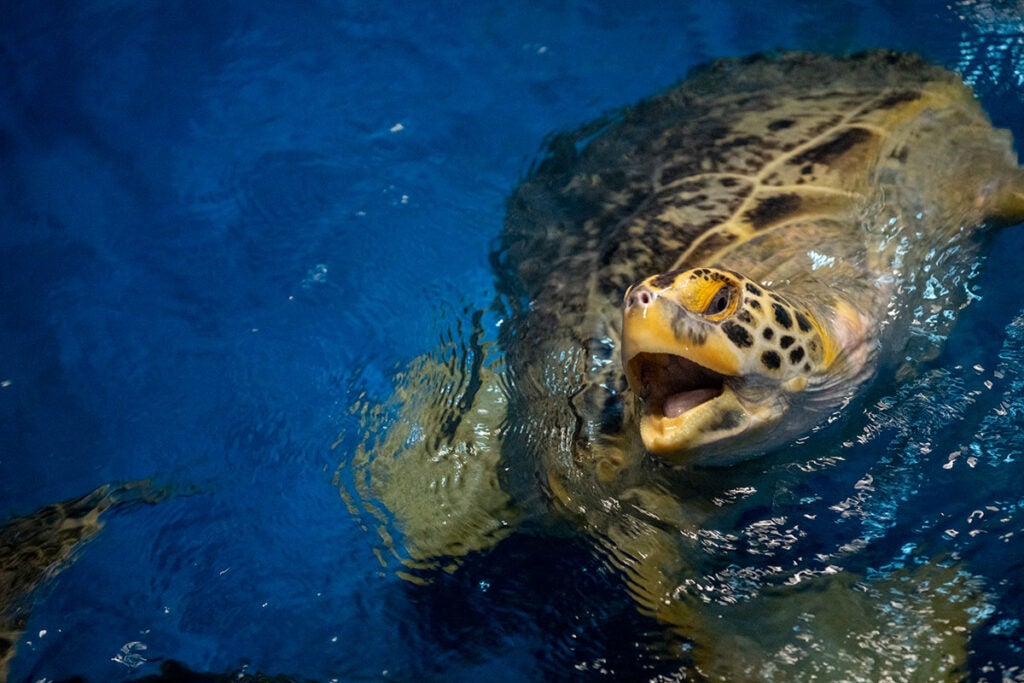 At 153 pounds, Bruno is noticeably larger than Sunny and Azul, who are smaller Eastern Pacific green sea turtles. While he doesn’t spend too much time with the other sea turtles, Bruno does hang around the divers at the surface of the Baja Bay habitat as they clean.

“He loves the attention!” said Melissa.

He also loves to eat.

He has a playful side, too.

“He enjoys playing with and chewing on car wash straps,” explained Melissa.

It may be an odd toy to those outside of the zoological world, but the straps have proven to be a safe and stimulating enrichment for the sea turtles. Melissa believes it’s because they encourage a bit of foraging behavior and the straps resemble natural sea grass, and the greens they feed him.

“Bruno is more active in the morning, too.” said Melissa.

Other than size, another way visitors can tell the three sea turtles apart: Bruno is more oval in shape, and his skin and shell are a lighter color.

Together, Bruno, Sunny and Azul serve as ambassadors for their wild counterparts, helping teach visitors about the challenges sea turtles face in the wild.

All seven species of wild sea turtles are threatened or endangered. They face many challenges including poaching for their meat, eggs, and shells, as well as being caught as bycatch in fishing gear or entangled in plastic. They also consume plastics that they mistake as food.

How you can help protect sea turtles in the wild: reduce usage of single-use plastics to keep our beaches and oceans clean, carry reusable water bottles and shopping bags, and reduce marine debris that may entangle or be accidentally eaten by sea turtles. Explore more on our plastic-free page.

Now you can go talk about Bruno, too, and explain to your friends how amazing sea turtles are and what you can do to protect them.