PUPDATE: The red wolf pups are now roaming outside on view to the public. They also have names – meet them here.

When Dr. Karen Wolf picks up eight newborn red wolf pups one by one, it’s more than just a routine – though adorable – new pup exam. It’s a victory.

“American red wolves are critically endangered, so having these pups here is really special,” says Wolf, head veterinarian at Point Defiance Zoo & Aquarium, where the litter was born last week. “They’re vital to the survival of the species.”

One pup at a time

The pups are part of a Species Survival Plan© (SSP) that includes more than 40 zoos and wildlife centers across the country and has helped bring this iconic animal back from the brink of extinction.

Point Defiance Zoo has been at the forefront of the program.

“There are fewer than 300 red wolves left in the world,” says animal curator Natalie Davis, who is part of the national red wolf SSP management group. “The goal of the SSP is to keep this species healthy, genetically, for the best chance of survival. The pups are an important part of that. It’s a big success story.”

And the good news is that they’re all very healthy.

“We’re evaluating overall health, looking for any obvious problems, and making sure their clean umbilicus is clean and dry,” says Wolf, who gave the pups their first wellness exam on Wednesday. “We check heart and lungs, look at their footpads and weigh them. So far they all look really good.”

The pups are growing, having put on a few ounces since keepers first measured them. But they’re all still in the 12-14-ounce range – about the same as a can of soda.

“Some are bigger, some smaller, and that’s normal,” Wolf says. “But they all have good muscle tone and are really active. They try to push away my stethoscope!”

To examine the pups, Wolf picks them up gently one by one, setting them in a separate basket afterward while mom Charlotte gets extra meatballs to give her energy for nursing. Each exam takes around a minute, with the pups squeaking all the way.

Telling them apart is tricky, but keepers Jennifer Donovan and Jarek Sarnacki have taken photos of each pup’s white chest blaze, as well as noting weight and how the paws look. Right now they’re all dark brown, but as they get older, they’ll develop individual coats of lighter brown, with the cinnamon red ear tips that give them their name.

Their eyes will open at around 10-14 days old, and they’ll be ready to explore outside the den by 4-6 weeks – if Charlotte lets them, that is.

“She’s a great mom, and nudges them close if they get too far away,” says Donovan, the senior staff biologist for Kids’ Zone and Red Wolf Woods at the zoo. “But when she thinks they’re ready, she’ll take them out. We’re letting her lead the way, because she knows what’s best.”

Even dad Hyde hasn’t seen the pups yet.

“He’ll nose in at the door, and Charlotte will grumble at him to go away,” smiles Donovan. “She’ll let him see them when she thinks it’s time.”

When Charlotte does take them out, zoo guests may also be able to spot them. They’ll grow up as a pack and stay at the zoo for possibly a year, until they are mature. Then they may stay, or move to another zoo to find a mate – and continue growing this endangered species. 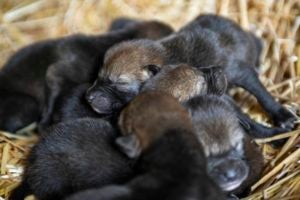 The red wolf SSP has deep roots in the Point Defiance Zoo family. Wolf is the veterinary advisor to the SSP, and along with associate veterinarian Dr. Kadie Anderson has published research on the species. General curator Dr. Karen Goodrowe Beck is the reproductive advisor, Davis keeps the breeding studbook (which tracks animals’ genetic lines), and conservation education program coordinator Craig Standridge is the education advisor for the program. Donovan has cared for the wolves since 2005, and many zoo staff have visited their protected range in North Carolina.

Hyde himself was born in the last litter of red wolf pups at the zoo.

“It’s exciting to be part of this story and be a champion for these animals,” says Sarnacki, who recently joined the Kids’ Zone keeper team.

“It’s so cool that our zoo guests can be a part of this wolf pack and watch them grow up and help this species survive,” says Donovan.

“For people to be able to see red wolf pups this young is really rare,” adds Wolf. “It’s going to be a lot of fun.”

TAKE ACTION: Find out how to help red wolves, or donate now to the Zoo Society’s Red Wolf Campaign.