Animal care aide Jordan Jirik lies flat on her stomach, her head hanging over the top of Baja Bay’s 280,000-gallon habitat. Below her, five hungry spotted eagle rays swim eagerly up to a large black sign with a big white X emblazoned on it. It’s their feeding-station target. And when it appears in the water, they know food will soon follow.

It’s lunch time in the Pacific Seas Aquarium, and the scalloped hammerhead sharks, spotted eagle rays and green sea turtles are practically pulling out their napkins. The well-choreographed feeding occurs twice a day, and visitors to Baja Bay often look up around 2 p.m. to catch the afternoon event.

Much flapping of pectoral fins ensues as Jirik leans over to hand-feed the rays a banquet of clam tongue and squid. They swim swiftly up in turn, pulling their heads and mouths close to the surface to eagerly snatch breakfast – then swim off. 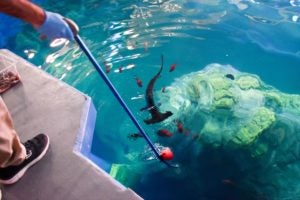 Across the water, staff biologists Tyler Rankin and Melissa Bishop hold 5-foot- poles into the rippling blue water, each one equipped with a bulbous red target and carrying a piece of herring in a jaw-like clamp. Their goal: attract a specific hammerhead shark to their feeding station. They want to ensure that each shark gets her specific quantity of food and vitamins.

Senior staff biologist Marc Duncan stands on a nearby platform over the water, tossing in food – or “scatter feeding” – to the smaller fish so they’ll be less tempted to steal the sharks’ carefully weighed portions.

Each shark gets between 15 and 30 pieces of fish per day, with the food items rotated between herring, smelt, squid, salmon and sometimes mackerel. All together, the five rays receive 3-to-3.5 pounds of shrimp (their favorite), clam tongue, squid and whole clams daily.

Once the sharks and rays have eaten, it’s sea turtle time! Sunny and Azul enthusiastically head to their targets (blue for Azul, yellow for Sunny) for their feast of romaine lettuce, red and green bell peppers, endive, cucumber, spinach, collard greens (sometimes) and broccoli (also a sporadic menu item). Each gets about 1 pound of produce per feeding.

The twice-a-day feedings – one in the morning, one just after lunchtime – are time-consuming, Duncan says. Each one takes an hour and requires four staff members. That’s roughly 56 staff hours of feeding time per week – and that number doesn’t include food prep like unboxing and unfreezing sustainable seafood items; gathering veggies; sorting, chopping and preparing individual diets for each animal.

Unlike the large adult sharks in the South Pacific Aquarium which are fed twice a week, the high-metabolism, growing juvenile animals in the Pacific Seas Aquarium require food frequently.

For the aquarists who do the work, it’s clearly a labor of love.

“There is a lot of work that goes into each feed,” Duncan says. “But it’s part of the attention we pay to the care of every animal. And it’s fulfilling to watch these animals thrive and grow.”