It’s possibly the best job in the world. Adrienne Umpstead, staff biologist at the Wild Wonders Outdoor Theater, sits in a pool of sunlight just near the tamandua habitat. One foot propped on a stool, her lap is covered with a small pillow and fleece blanket. One hand is poised with a bottle; the other gently supports a tiny tamandua, who’s snuggled in the blanket and reaches eagerly for the bottle.

Chiquita’s onto her third feeding of the day – and someone’s got to do it, right?

Chiquita was born premature and underweight, needing round-the-clock keeper feeding. She now weighs in at 2.5 pounds, about the size of a small puppy – but far cuter, with an impossibly long tongue that pokes out as she sucks enthusiastically. Her limbs are solid and strong, with only a hint of baby wrinkles, and her two tiny ears stick out sideways like Yoda’s.

Southern tamanduas are a species of anteater, native to South America. Adults have that signature white fur with a black “vest” and yellow neck, to blend in with the dappled tree canopy where they spend most of their time foraging or sleeping.

Born hairless, Chiquita has grown a soft, downy coat of gray-brown fur, with a golden stripe down her back. She’s been clinging strongly to mom Terra since birth, as baby tamanduas do in the wild as their mother climbs trees. Now she’s also growing long, curved claws, to grip even better, and her tail – gray, with a tiny pink ring – curls around Umpstead’s forearm.

Just inside, Terra’s completely unconcerned, munching with gusto on her favorite treat – avocado.

“Both tamanduas are doing really well,” says Mattison. “Chiquita just rides around on Terra’s back, or sleeps with her in the nest box.”
Keepers weigh the little pup daily, and the veterinary team checks in on her every week, although she hasn’t needed their help for a while now.

In fact, she’s getting more adventurous. As the pup finishes up her bottle, Umpstead scoops her up and pops her back in the nest box.

And Chiquita pokes out the tip of her pale brown nose – just for a second. 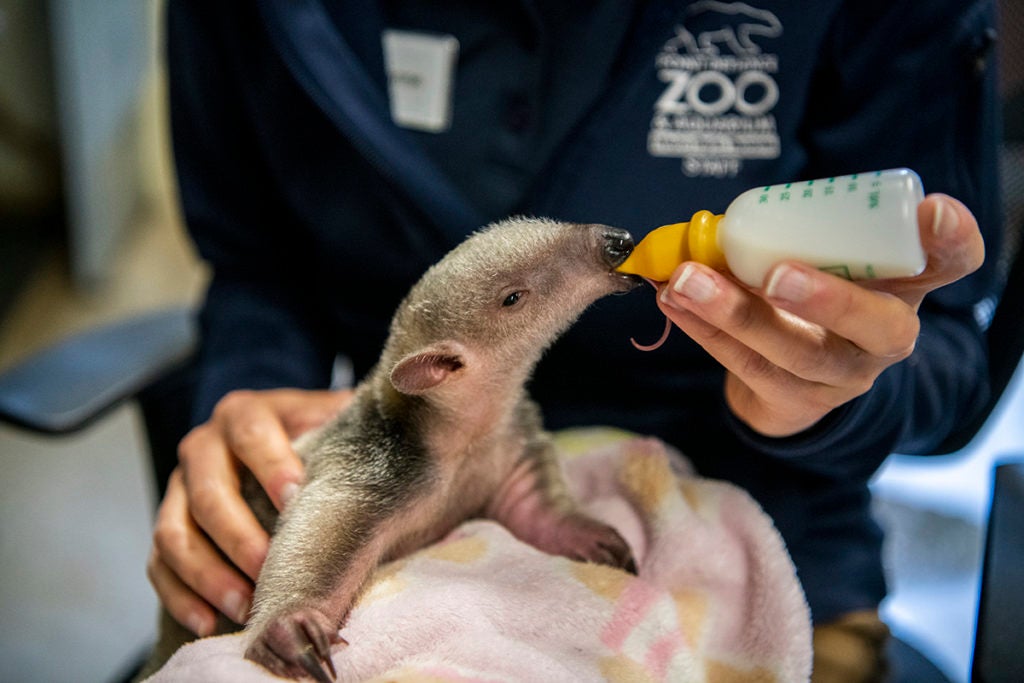