Both staff biologists and the veterinary staff at Point Defiance Zoo & Aquarium have brought a rare penguin chick back to good health, just days after it was suffering from what appeared to be dehydration.

The tiny Magellanic penguin chick, hatched two weeks ago, was found lethargic in its exhibit with its parents in early June. After evaluation, veterinary staff determined the chick needed extra assistance to survive: syringe feedings, multiple times a day, from keepers. Now just one week into the feedings, and the two-week-old chick has already gained 200 grams (weighing just over 1lb now)!

“This is the first time we’ve hand-reared a penguin chick,” said Head Veterinarian Dr. Karen Wolf. “The chick is feeding well and we are optimistic it will flourish from here.”

Keepers feed the chick a  special “smoothie” four times a day. The smoothie blend consists of filleted herring and krill (without the bones, skin and fins), and vitamins and supplements.

“We even warm up the smoothie and check the temperature, just like you would warm up and test a baby’s milk,” said keeper Cindy. “The chick makes happy vocalizations when we feed it, so we can tell it really enjoys its special meals.” 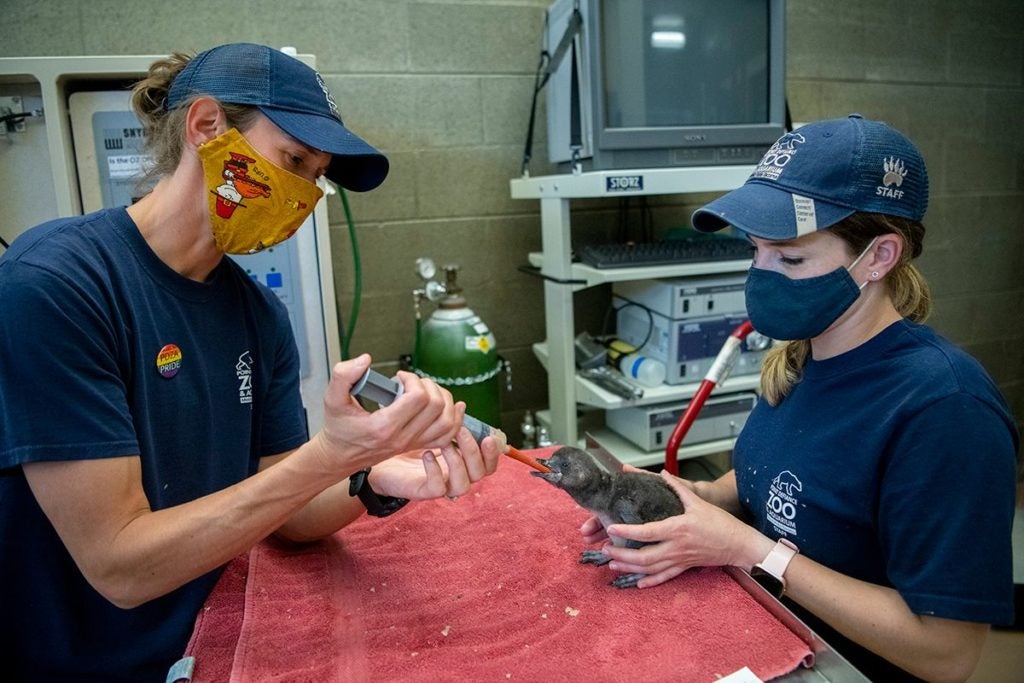 The chick is also starting to eat solid foods, like herring.

The veterinary staff will continue to closely monitor the chick, with multiple check-ups, listening to its heart and lungs. The chick’s gender isn’t yet known.

The chick will live behind-the-scenes at Rocky Shores for the next few months, where keepers will teach it to swim safely in a shallow pool until its waterproof feathers grow in. The chick will then rejoin its parents, Red and Pink, and the rest of the colony at the zoo’s Penguin Point.

This is the fifth consecutive year for the hatching of penguin chicks through Point Defiance Zoo’s participation in the Association of Zoos’ & Aquariums’ Species Survival Plan® (SSP) managed breeding program for Magellanic penguins.

Magellanic penguins, native to the South American shores of Argentina, Chile, Uruguay and Brazil, are listed as near-threatened on the IUCN Red List, which the International Union for Conservation of Nature compiled to indicate the status of various species whose numbers are drastically dwindling in the wild.

Penguins are threatened in the wild by a number of factors, including the proliferation of plastics in the ocean, spills of oil and other hazardous materials, and overfishing.

Sadly, the second penguin chick passed away on June 2. Results from the necropsy, or animal autopsy, are pending.