Two dozen necks crane up, up, up, eyes riveted on the scene above, as four hammerhead sharks cruise overhead. Sunny the sea turtle joins the scene, swimming unhurriedly by and then diving deeper into his home. Suddenly, two eagle rays “fly” overhead, their pectoral fins gently flapping up and down to propel them
through the water.

This is Baja Bay, the 280,000-gallon show-stopper exhibit in the new Pacific Seas Aquarium, which opened to huge crowds and loud oohs and ahhs on Sept. 7 at Point Defiance Zoo & Aquarium. It’s just one of many habitats filled with sea creatures native to areas from the cold waters of Puget Sound to the subtropical climes of Baja California.

Admission to the aquarium is free with membership or paid Zoo admission. 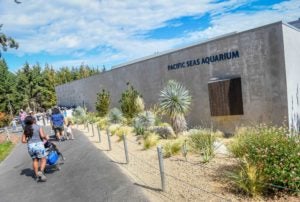 The state-of-the-art, 35,000-square-foot aquarium represents decades of dreaming and four years of design and construction.

It is the largest capital project in Point Defiance Zoo &  Aquarium’s 113-year history, funded largely through a city-wide bond with support from The Zoo Society through donations from individuals, corporations and foundations. The new aquarium also is just one of many jewels in the crown of Destination Point Defiance, a Metro Parks Tacoma initiative to improve access, add amenities, and inject more elements of fun and excitement into Point Defiance Park and the surrounding area.

“We have opened the doors to a world of wonder that will wow people of every age,” said Andrea Smith, president of the Metro Parks Tacoma Board of Commissioners. “We are enormously grateful to the voters of Tacoma, who said a resounding “Yes” in the 2014 bond-issue election that made construction of the Pacific Seas Aquarium possible.” 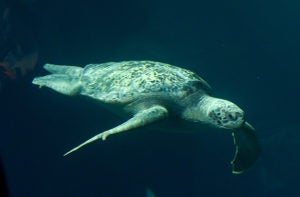 From the moment you walk through the doors, you’re plunged into a wondrous ocean journey. Your first impression through a large eye-level viewing window into the top of Baja Bay likely will be a shark staring back with one emotionless black eye set at the end of that hammer-shaped head. You’ll see spotted eagle rays flying by in a silent form of beautiful water ballet, or glimpse 15-year-old sea turtle brothers Sunny and Azul coming to the top of the exhibit, then plunging to its depths.
Orange Japanese spider crabs, their impossibly long legs holding them to a rocky surface, come next. Then it’s on to a five-exhibit Jelly Gallery, its centerpiece one of only two free-standing jellyfish globes in the United States. You’ll wonder how they got in there – and marvel as you touch the cold water flowing over the globe, your finger marks disappearing in an instant.

At every stop along stroller- and wheelchair-friendly ramps from one gallery to the next, interactive electronic kiosks help you learn more about the animals through stories and fun quizzes.

Follow a light installation like shimmering water toward a series of habitats large and small, featuring species that live under the Tacoma Narrows bridges; in a California kelp forest; in shallow areas and deeper waters. In one, a  giant Pacific octopus clings to the rocks or glass. The 100,000-gallon Northwest Waters habitat, complete with barnacle-encrusted pilings and more than 400 brightly  colored sea anemones, is home to animals that live in the zoo’s very own backyard – Puget Sound.

And just down the way, past a large school of metal fish suspended from the ceiling, the Tidal Touch Zone beckons. It is a place where guests connect intimately with the ocean, actually feeling the spikiness of sea urchins, the hardness of small crabs’ shells, the soft squishiness of sea cucumbers and the astonishing variety of surfaces among different species of
sea stars. 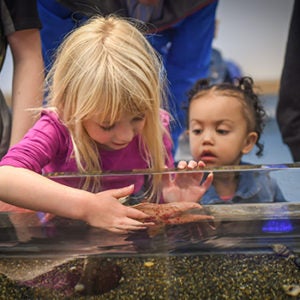 The Pacific Seas Aquarium is about 20 percent larger than its predecessor, the  now-closed, 55-year-old  North Pacific Aquarium. So the tidal-animal touching area is bigger, too, allowing more room for visitors – notably those with small hands and big imaginations – to get as close as possible to nature.

At Baja Bay, visitors  connect through a window into a subtropical world that arches some 10 feet overhead in an unusual semi-tunnel that puts you right in the action. This is where sharks cruise overhead and spotted eagle rays glide by. Colorful subtropical bony fish, such as the bright reddish-orange bigscale soldierfish, flit about in schools.

The amazing building that creates a feeling of being immersed in the ocean was designed by San Francisco-based EHDD, the San Francisco-based architectural firm with a long history of bringing world-class aquariums like the one in Monterey, Calif., to life.

But magnificent as it is now, the Pacific Seas Aquarium has more secrets to reveal, more animals to come, more finishing
touches to be done.

“It’s not 100 percent complete, but it’s close,” said Alan Varsik, director of Zoological and Environmental Education for Metro Parks Tacoma. “Aquariums are among the most complex buildings to construct and, like any large project, there will be some additional pieces to get just right,” he added. “But we’re so excited about the extraordinary
experiences our guests will have inside, we want to invite them in as soon as possible.” 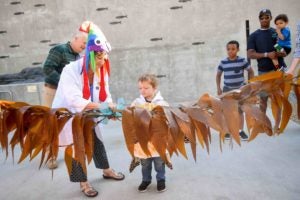 For now, aquarium habitat viewing windows are clean, hundreds of animals already are in residence, and beautiful artworks are installed.

And Point Defiance Zoo & Aquarium Aquatics Curator Neil Allen, who has spent a lifetime helping people love the ocean and the animals that live there, is eager for the Pacific Seas Aquarium to get that “lived in” feel. He’s certain the sea life inside will spark a new generation of ocean conservationists. And he loves seeing hand and nose prints on all of those sparkling windows.

“The Pacific Seas Aquarium delivers a transformative experience,” Allen said. “It’s a wonderful feeling to see children’s eyes light up when they enter the world of the wondrous ocean.”