Just when you thought it was safe to go into the zoo, we bring you – Halloween in the Aquarium! Arms covered with suckers. Backs covered with eyes. Lumpsuckers, tentacles, vacuum mouths and just plain scary faces. (Plus a white crab nicknamed “Casper.”) If you’re looking for weird, cool or slightly icky, our Pacific Seas Aquarium and South Pacific Aquarium have got those in spades. Come in, we’ve been expecting you…. 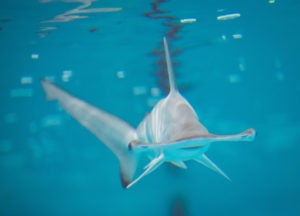 A rectangular head with scalloped edges. Eyes and nostrils on either end. Add in shark teeth and you have a contender for Most Bizarre Halloween Look. But scalloped hammerheads aren’t scary, they’ve just evolved for their environment: a broad head with wide-apart eyes helps them find prey with stereoscopic vision. Pretty cool.

FIND OURS: In Baja Bay in the Pacific Seas Aquarium. 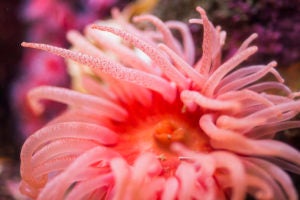 Okay, anything that entices prey with welcoming tentacles, then stings them with tiny toxic harpoons is worthy of a horror movie – especially if you’re the prety.

But anemones are also home for some fish, and are essential to the ecosystem. And you have to admit, they’re pretty.

FIND OURS: In Northwest Waters and nearby habitats, including Puget Sound Color, where tiny strawberry anemones look exactly like pink lichen. 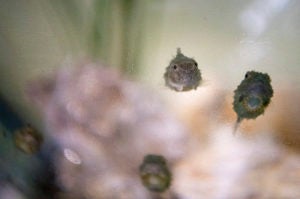 Pacific spiny lumpsuckers – even the name is grisly! And the fish? Well, despite having lumpy skin, bulgy eyes, a puffy white body and fins with suction cups, these little guys are absolutely adorable. They’re not great at swimming, so they attach themselves to kelp, eelgrass or rocks around Pacific Northwest waters.

FIND OURS: In the Tidal Touch Zone. 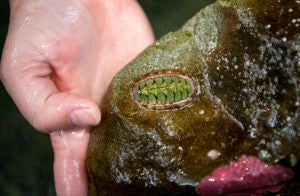 Thousands of eyes all over your back? Now that’s seriously scary – if you’re one inch across, the size of a line chiton. These molluscs may be small, but have armored plates on their back for defense and can curl up into a ball, potato-bug-style, around prey. And with eyes all over their backs, they can see anything coming in air or water.

“We wondered why we could never surprise them when we tried to move them to another spot,” say the naturalists in the Tidal Touch Zone. “Actually, they could see our hands coming from a long way off.”

Even weirder? Each of those tiny eyes has a lens made of aragonite – a type of rock.

FIND OURS: In the Tidal Touch Zone. (Ask a naturalist to point them out.) 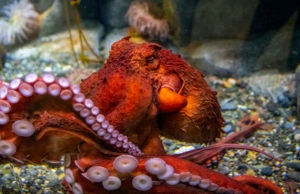 No argument here – the giant Pacific octopus has long claimed the Puget Sound title for favorite Halloween-ish animal. They’re smart, they’re sociable with humans, they’re incredibly strong, have suckers all over their eight arms, a sharp beak in their mouth and a head directly attached to their “feet” (hence the class name cephalopod). Around Tacoma, they’ve gained legendary status as beloved inhabitants of the old Narrow Bridge, which toppled in 1940.

FIND OURS: Near the Under the Narrows habitat. 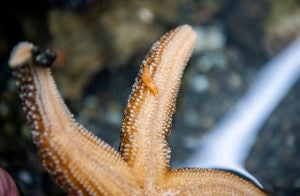 All right, prepare for something kind of gross. At least, for us. For sea stars or limpets, it’s not gross at all to have a commensal scale worm tucked inside you. These worms often live in sea stars’ bodies, eating their host’s leftover food and visible as a curvy line between the thousands of tube feet. It’s a win-win situation: if a worm is living in a limpet and senses a threatening sea star predator, the worm attacks by sea star by biting its feet, causing it to withdraw.

Also look for: the polychaete worm and calcareous tube worm – the feathery part is its lips!

FIND OURS: In the Tidal Touch Zone. 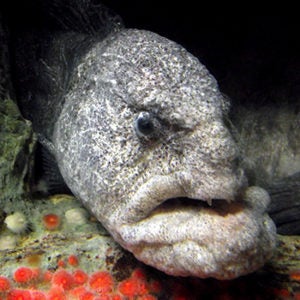 Hands up – who’s dressing up as a wolf eel for Halloween? That giant, droopy face, those fat lips, that zombie-gray skin? Actually, wolf eels are gentle around humans (like divers and aquarists) and often rather shy, hiding in crevices by day and emerging at night to munch on sea urchins.

FIND OURS: In the Under the Narrows habitat. 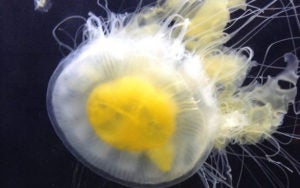 They eat other jellies, ensnaring them with their frilly mouth arms and thin, sticky, venomous tentacles. Sound scary? Not to humans – an egg-yolk jelly’s sting is very mild.

But beware the lion’s mane jelly, an enormous jellyfish with trailing tentacles that give a painful sting. Both live in Puget Sound.

FIND OURS: In the Jellies Gallery. 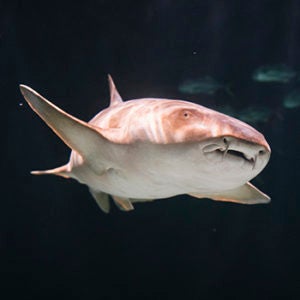 It’s a face only a mother could love – and shark fans, of course. Nurse sharks have two long nasal barbels, like fleshy whiskers, near their mouth, which helps them feel around for prey on the murky ocean floor – then suck it up like a vacuum. But although they can grow to a whopping 14 feet, nurse sharks are docile unless disturbed.

FIND OURS: In the Outer Reef habitat in the South Pacific Aquarium.