It’s a problem, just how many spots Kazu the tapir calf has.

Not for him, of course – the spots are excellent camouflage. But for Dennis Parkhurst and Mason Patzer, carpenters at Point Defiance Zoo & Aquarium, the baby tapir’s watermelon-spotted coat presented a challenge: How to illuminate all those spots in a Zoolights display?

Because this year, Zoolights is all about baby animals.

“We always like to mix things up a little, to make it interesting for the folks who love to come back year after year,” explains Scott Clarke, operations supervisor, who oversees the popular holiday tradition with over 700,000 lights. “This year we decided to honor all the baby animals born this year at the Zoo.”

That would be eight red wolf pups, Butternut the beaver kit, tamandua pup Chiquita and Kazu the tapir calf. If that sounds like a lot of time in the wood shop, that’s because it is.

“We’ve spent around four weeks on this, altogether,” says Parkhurst, stepping back from drilling holes in a plywood tapir.

Clarke’s operations crew has a number of ways to make their famous Zoolights displays, which have been delighting South Sounders for over 30 years. Some, like the giant Pacific octopus on the aquarium roof or the green sea turtles, have LED strings attached to big rolls of mesh. Others, like the polar bears, are solid, lit from within.

But many are cut out by hand from plywood, and that’s something Parkhurst has been doing for decades. In 2015 he retired after 23 years of Zoolights, returning to help out again this year. Patzer, on the other hand, began last year. Together, they make an excellent team.

The first step was Zoo designer Anita Landree hand-drawing the baby animals and printing them on transparencies. Next, Parkhurst and Patzer projected them onto a 4×8 plywood sheet, adjusting distance to get each animal around two feet high. They traced the design with a Sharpie, and cut out around the shape.

“Only about a kazillion holes,” says Parkhurst, laconically, as Patzer smooths edges with a router.

Finally, the pair paints each display black and pushes through string lights: deep orange for the beavers and tamandua, bright orange for the baby tamandua on its mom’s back, red for the wolf pups, orange, green and blue for the tapirs.

Ah, but all those tiny spots in the middle?

“We couldn’t use lights for each one – it would look like a mess of lights, not a tapir,” says Parkhurst. 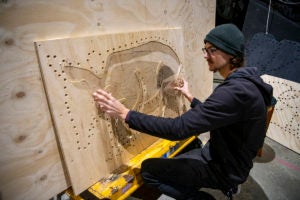 So Patzer invented a cool solution: jigsaw an indent in the center of the tapir, cut and fit a sheet of plexiglass and shine a single warm light behind it – voila! Soft glowing tapir calf spots.

They’re using the same invention for other small details, like the delicate hands of the beaver kit.

Clarke’s not saying where his crew is planning to set up the baby animal Zoolights.

“It makes it more fun for people to find them, kind of like a treasure hunt,” he grins.

In their spare time, the team has made new versions of dozens of older plywood Zoolights worn out with weather: the skating puffins, the eight-foot reindeer, a clouded leopard.

“It’s a lot of work,” says Patzer, standing by the work trestle with a giant crab hovering behind him. Neatly stacked rolls, lights, boards and sculptures fill the enormous wood shop, rather like Santa’s workshop. Overhead, three massive Zoolights cacti hang from the ceiling.

“And it’s always a challenge,” Parkhurst says, glancing at the tapir spots.

But a fun one?