It looked like a regular school assembly – until they brought out the polar bear skull.

On a gray November afternoon, the kids at Arlington Elementary School in Tacoma’s south end filed into the gym. Excited voices rose and fell as staff from Point Defiance Zoo & Aquarium connected technology on the stage. Then a smiling face filled the giant projection screen, and called out:

“Hello, Arlington! Are you ready to talk about polar bears?”

It was a Wildlife Champions assembly, complete with polar bear skull and pelt, and on the screen was Zoo staff biologist Cindy Roberts. She was Skyping live from Churchill, Manitoba, where she’d just spent two weeks as a polar bear ambassador.

Now, she was on screen to teach the Tacoma students how to protect wild polar bears as a part of their nature-based science curriculum Wildlife Champions, a three-year project initiated by Point Defiance Zoo in partnership with Metro Parks Tacoma’s Northwest Trek, Tacoma Nature Center and Metro Arts.

A cheer erupted in response, then all the students settled down to listen.

“So how did a zookeeper come to be in the Arctic?” asked Roberts, whose usual job is to care for polar bears, walruses and other Arctic animals at Point Defiance Zoo. “Well, let me tell you.”

After flipping her screen to show a map of her long flight northeast through Canada, Roberts went on to explain about Churchill, the

“Polar Bear Capital of the World.” The remote Manitoba town sits at the very edge of Hudson Bay, where sea ice forms each winter.

As it does, hungry polar bears that have been roaming the tundra all summer come straight through the town on the way to the sea ice to hunt for seals.

The result is challenging for residents, but a marvelous opportunity both for tourists and scientists who study polar bears to better protect them from the threat of climate change.

Roberts, as a zookeeper who works daily up close with polar bears, is uniquely positioned to tell the public just how amazing they are – and how much they are at risk from starvation as the sea ice melts from warming global temperatures. She’d been invited to Churchill by non-profit conservation group Polar Bears International to do exactly that, and now she was giving the message to Arlington’s future scientists and wildlife protectors. 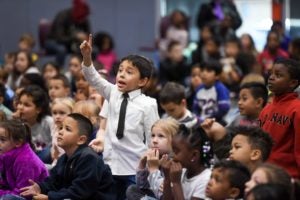 “So what do you think I do as a zookeeper?” she first asked.

A hand shot up. “Keep track of the animals!”

“That’s right!” laughed Roberts. “I give them their daily diet and vitamins, just like you guys eat healthy meals. And I clean their room – who here has to clean their room?

“I also help bring them to our veterinarians for check-ups, just like you go to the doctor.”

All eyes grew big as Roberts showed a photo of Zoo polar bear Blizzard stretched out in a veterinary exam, and Roberts added some fun facts about bear anatomy (42 teeth, noses that can smell a mile away.)

“But here, I get to go out on tundra buggies – like giant buses – and see polar bears in the wild,” Roberts went on, swiping through photos of Churchill’s bleak, snowy tundra. “Look, here are two I saw playing in the snow – they’re practicing sparring for when they get to be adults.”

“Wooahhhhh!” cried every voice in the gym as two tall bears appeared on the screen, hip-deep in snow.

Save our Sea Ice

“But you know what’s the most important thing I’m going to ask you today?” said Roberts. “We need to help polar bears, to save their sea ice. So I want you all to do this: Go home today and ask your grown-ups to turn off their car when they’re waiting and not driving. That way we won’t keep heating up the planet and melting the sea ice. Can you do that?”

Every head nodded solemnly. Then, guided by Zoo staff, the entire gym did an all-school polar bear “wave” – one section after another, shouting “SAVE! OUR! SEA ICE!!!”

“Yeah!” called Roberts. “That was awesome! Thanks, everyone!”

As students filed out back to class, Zoo staff held out touchable biofacts – a soft polar bear pelt, a reconstructed paw, a massive skull.

“I loved that!” said Ahmir, in Ms. Romero’s third-grade class. “My favorite part was the fur and skull.”

“My favorite was the whole thing,” said Justin, nearby.

“And they have 42 teeth!” exclaimed Efeso, eyes wide.

“I wanted to know why the ice was melting,” said Natalie seriously.

“They have so many questions, and they are so passionate about saving animals,” explained Ana Romero as they walked out. “This is such a big deal for them.”

As a final treat, staff in polar bear and tiger (Arlington’s mascot) costumes gave high fives and hugs as everyone left the gym. Last to leave was Jalelia, a first-grade girl who’d specially worn polar bear pants, shirt, furry headband and boots for the occasion. She smiled shyly as she posed for photos with the polar bear mascot.

“I love polar bears so much,” she said quietly. “Their fur is so soft.”