Blizzard the polar bear celebrated his birthday at Point Defiance Zoo & Aquarium with all his favorite things: cake, a tree, a big barrel and more than 2,000 pounds of ice.

At 26, Blizzard is a senior bear and each birthday is a special one. The median life expectancy for polar bears is about 23 years.

“We love celebrating Blizzard,” said Malia Somerville, the zoo’s marine mammal curator. “We give Blizzard exceptional care and attention year-round, but on his birthday, we go all out.”

Somerville even baked Blizzard’s birthday cake herself, with all of his favorite flavors: carrots, peanut butter, yogurt and blueberries.

Blizzard’s team of keepers watched in delight as he ate his cake, first licking the frosting before taking big polar bear bites. He ate much slower than you’d think an animal his size would eat, savoring every bite.

Then, Blizzard’s attention turned to the Douglas Fir tree. No longer a gentle giant eating a cake, he knocked down the tree and ripped off its branches. Nearby, another birthday surprise: a big barrel for him to roll around. 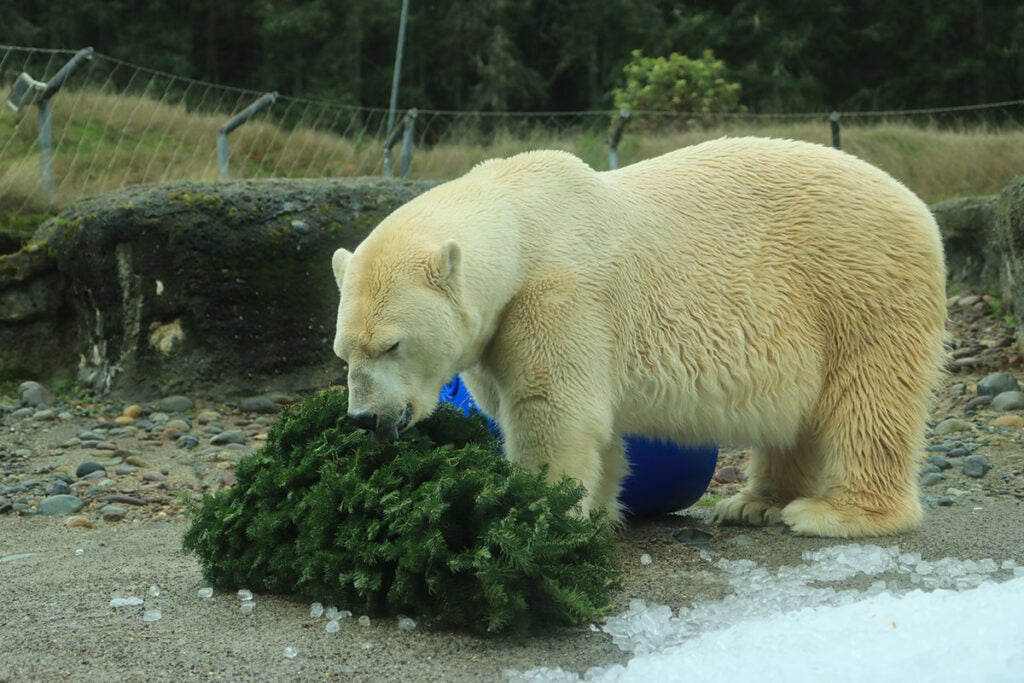 He saved the best for last: more than one ton of ice. He dove nose-first into the pile, rolling and sliding around in it. 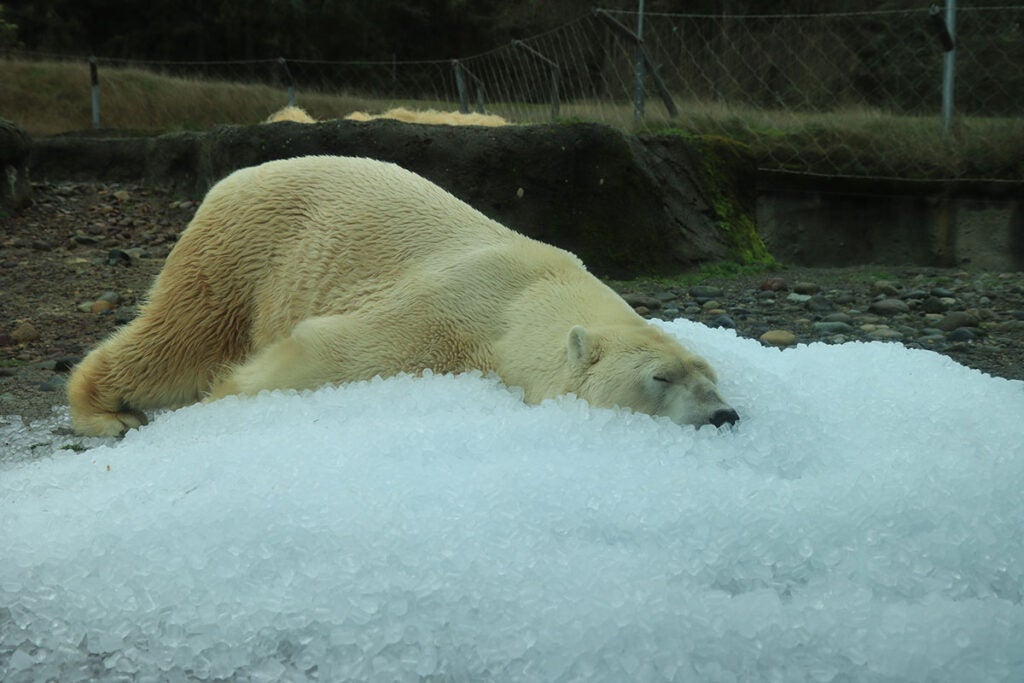 “Blizzard is one of the most powerful, awe-inspiring animals at our zoo,” said Somerville. “But he has a playful side too.”

Blizzard was rescued as an orphaned cub in Churchill, Canada before coming to Point Defiance Zoo & Aquarium in 1997. He’d been separated from his mother on the Arctic tundra and had no chance of survival in the wild.

He was diagnosed with liver cancer in September and is receiving chemotherapy treatment and other supportive care to slow the progression of the disease and keep him comfortable. The elderly bear is trained to participate in his medical care, putting a paw through a specially built sleeve in his den so his care team can take voluntary blood samples that are critical to closely monitoring his health.

The polar bear is designated as threatened under the U.S. Endangered Species Act, and the World Conservation Union’s Species Survival Commission has designated the species as facing a high risk of global extinction. As global climate change reduces Arctic sea ice, polar bears struggle to locate and catch seals, making it more difficult for them to survive.

Point Defiance Zoo has worked for years with the non-profit Polar Bears International (PBI) to tell the story of polar bears in the wild, and the challenges they face, like the melting of sea ice. The Zoo is a PBI Arctic Ambassador Center, and keepers and other staff have traveled to see bears in Churchill, Manitoba.

Point Defiance Zoo encourages everyone to take action to help polar bears by reducing your carbon footprint, driving and idling less, lowering your thermostat and encouraging others to do the same. You can also donate to the zoo’s Dr. Holly Reed Wildlife Conservation Fund and support critical research on how polar bears are impacted by loss of sea ice due to climate chance.