National Zookeeper Week takes place July 19-25 this year. The week is devoted to sharing the passion and dedication of keepers.

Even though Point Defiance Zoo & Aquarium was temporarily closed to the public to slow the spread of COVID-19, the keepers never took a pause. They are a dedicated group of people who work tirelessly each day to provide the animals with the best care possible. Below are stories from just a few of our incredible zookeepers and aquarists at Point Defiance Zoo & Aquarium.

Adrienne Umpstead became a zookeeper because she loves animals and wanted to work with as many different species as she could. Her favorite part of the job is getting to train animals, whether it’s training them to participate in their care, practice a stage routine for a summer animal show or learn to go out on walks around the zoo to meet visitors.

“It’s very rewarding to connect with the animals in such a positive way,” said Adrienne.

How Adrienne became a zookeeper: In high school, Adrienne raised two guide dogs. That was her first experience in animal training. She then worked at veterinary clinics cleaning, feeding and lending a hand during animal procedures. In college, she majored in Psychobiology and continued to work at the local veterinary clinic in the summer. While in college, she interned at Point Defiance Zoo & Aquarium, Tracy Aviary in Salt Lake City and International Exotic Animal Sanctuary in Texas. While at Point Defiance, she’s worked as an interpreter in the education department, a Zoological aide in Kids’ Zone and a Staff Biologist at Wild Wonders Outdoor Theater, where she works now.

Caryn Carter always had a fascination with animals and nature growing up, and says after her first internship, she knew she was meant to be a zookeeper.

“As a zookeeper, we get to be involved in so many different facets of conservation and animal care, such as training, research, education, medical care, fieldwork, and yes, never-ending cleaning,” said Caryn. “I love being outside, multi-tasking, staying busy, and working as part of a team. Every day is different and we are always expanding our knowledge and evolving to provide the best possible care for the animals.”

Caryn says the opportunity to share that knowledge with the community is incredibly fulfilling, knowing that we get to foster the next generation’s passion and curiosity for conservation and the environment.

“I always knew that I wanted to build a career that served the greater good and was a part of something bigger than myself,” said Caryn.

How Caryn became a zookeeper: Caryn earned a Bachelor of Arts degree in Drama. A few years after graduating, she realized her heart had always belonged to animals. She went back to school and earned her Bachelor of Science degree in Biology. After earning that degree, she interned at Point Defiance before accepting a year-long temporary zookeeper position. She then went onto work at Blank Park Zoo in Des Moines, Iowa and at the Seattle Aquarium. Her career has now come full circle, and she’s back at Point Defiance Zoo working in the Rocky Shores and Arctic Tundra habitats.

As a child, Melissa Bishop’s family lived just down the road from the Minnesota Zoo. She visited the zoo often and knew at a young age that she wanted to work with animals, specifically aquatic animals, when she was older.

“One of my greatest satisfactions has been raising juvenile scalloped hammerheads and spotted eagle rays in the Pacific Seas Aquarium, and now watching them grow before our visitors’ eyes,” said Melissa. “Our three sea turtles also bring me a lot of joy, and I love diving with them in the Baja Bay exhibit.”

Melissa says she feels fortunate and honored to work with the animals every day, and provide excellent care for them.

Like the others, Sheriden Ploof grew up loving animals and wanting to work with them. She says her favorite part of the job is training the animals.

“It’s amazing to see the steps it takes for the animals to learn. They really seem to enjoy their training sessions, and that’s where some of the best keeper-animal relationships are formed,” said Sheriden.

One of her favorite stories during training happened with E.T., a beloved walrus at Point Defiance Zoo that passed away in 2015.

“I had just started working with E.T. and I noticed something in his pool. E.T. was incredibly smart, so I asked him to ‘bring me’ the object. Instead, he dipped his face underwater, grabbed a mouthful of water and completely soaked me,” said Sheriden. “The animals know if you’re new, and don’t hesitate to point it out.”

Sheriden says training also helps for research purposes and is one way zookeepers can have a serious impact on the world, helping to save species in the wild.

How Sheriden became a zookeeper: Sheriden graduated with a Bachelor’s degree in Marine Science from Samford University in Birmingham, AL. After college, she interned at the Vancouver Aquarium in Canada. She interned and was hired on as a temporary keeper at Point Defiance. She briefly worked at the Oregon Zoo, before coming back to Tacoma where she’s now been for eight years.

Tyler Rankin has always had a passion for the ocean and animal care, so a job as an aquarist was an obvious choice.

“I’ve always been fascinated with aquariums and how they basically transport you to another world,” said Tyler. “Sharing the ocean with someone who has never seen it is a special thing. This job has the potential to encourage people to make important conservation decisions.”

Tyler says one of his favorite parts of the job is routinely scuba diving with sharks and sea turtles.

How Tyler became an aquarist: Tyler earned his Bachelor’s degree in Marine Biology. He volunteered, interned and became scuba certified.

“The most important step was getting my first full-time job as an aquarist with Ripley’s Aquarium of Canada,” said Tyler. “I was hired to help open the aquarium and I was able to get a ton of experience in a short amount of time. It helped open up a lot of opportunities for my career.”

Tai Fripp is an aquarist with a passion for sharing the stories and ecologies of aquatic animals with visitors. She says as a child she wanted to be the next Jeff Corwin, traveling the world and sharing all the amazing animals with people, showing them why conservation is critical.

“I love giving visitors the opportunity to connect with animals in a meaningful way,” said Tai. “Giving people that spark is how we can change habits in better ways that benefit both animals and people.”

Tai also says she loves the challenge that comes with the job: caring for so many different animals in the aquarium!

How Tai became an aquarist: She volunteered, interned and worked part time while earning her Bachelor of Science degree. She also earned her scientific diving certification.

“I can’t remember ever wanting to do anything other than work with animals,” said Jamie. “It’s incredible to work with some of the most endangered animals on the planet. I love to share my personal knowledge and experiences with others to help save these species.”

Jamie works behind the scenes with red wolves. She says she loves to be welcomed into work each morning with wolves howling together.

“There hasn’t been one time where my heart doesn’t flutter,” said Jamie. “There’s something so beautiful and historic about the world’s most endangered canid greeting me as I start my day.”

How Jamie became a zookeeper: Jamie earned her degree in Zoo and Aquarium Sciences and went on to participate in five animal care internships. She worked several full-time positions before getting her current job, which she calls her “beyond dream job.”

Stephanie Rager grew up spending summers on the Oregon coast and frequenting the Oregon Zoo.

Stephanie says she wanted to be an advocate for animals, to teach and inspire others that each species is incredible in its own way and it is up to each person to ensure that each species has the ability to thrive in the wild.

“I wanted to be like one of the people who inspired me to care about animals, and who taught me that even though animals can’t change what is happening to their habitats, we can,” said Stephanie.

Stephanie says her favorite days are the ones where she knows she has inspired at least one more person to go into the world, actively caring about species conservation.

How Stephanie became a zookeeper: Stephanie earned a Bachelor of Science degree in Biology from the University of Portland. While studying there, she worked for the university’s crab lab. She interned at Point Defiance and eventually was offered a full time job.

“I ended up with my dream come true,” said Stephanie. 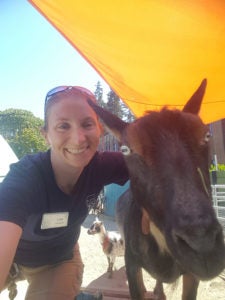 Lisa Ranck says there’s not a moment in her life that she can remember not wanting to become a zookeeper. She says she loves everything about zookeeping, from working with the animals to educating the public about conservation efforts.

“My favorite part of the job is animal training. It can be challenging but is so rewarding,” said Lisa.

Lisa says she’s been able to train and gain the trust of Hanson the goat.

“Because we have that mutual trust, he allows me to bathe him as well as trim his hooves voluntarily. He knows I’m not going to hurt him and he knows that he will be rewarded for his work,” said Lisa.

How Lisa became a zookeeper: In high school, Lisa helped at an animal shelter. Her first job was a kennel assistant at a veterinary clinic. She went to Washington State University and studied Zoology. While at WSU, she helped in their raptor center, bear center, swine club and worked on a cattle nutrition trial. While Lisa was in college, she interned at Point Defiance. After college, she worked at the Idaho Falls Zoo and at the Denver Zoo before coming back to Point Defiance.

Christy says she grew up with cats and dogs and visited the animals on her grandparents’ farm. She always knew she loved animals, but never even considered a job as a zookeeper until after she graduated college.

“When I got hired as a keeper, I was so excited to take care of a variety of animals,” said Christy. “When I first started, I called my parents excited because I had picked up elephant dung! I love being reminded of that excitement, because now that’s something I do each day. It helps remind me how fortunate I am to be doing such a unique and exciting job.”

Christy says her favorite part of the job is to help guests learn more about the species and individual animals.

“As I became more knowledgeable about the animals I cared for and the status of their wild counterparts, I grew passionate about helping to spread messages of conservation,” said Christy.

How Christy became a zookeeper: Christy earned her Bachelor of Science degree in biology. After college, she worked part time at Point Defiance while also working at a veterinary clinic.