At Arlington Elementary in South Tacoma, 25 kids are wiggling into blue rain jackets. As a teacher corrals them into line, they hop around excitedly, chatting to the four Point Defiance Zoo & Aquarium staff helping them.

“Are we going to the park?” “Are we doing science again?”

When the Zoo staff smile and nod, there’s a group exclamation: “Yessssss!”

It’s exactly what everyone wants to hear. Because these 4th and 5th-graders are part of the three-year Wildlife Champions project, a partnership between the Zoo, Metro Parks Tacoma and Tacoma Public Schools that’s designed to teach empathy for wildlife through nature-based science.

And the rain jackets? That’s because half of the lessons are done outside in the schoolyard or local Oak Tree Park.

“The big goal is to develop empathy, so that Arlington students become better stewards of their natural neighborhood,” says Craig Standridge, one of the Zoo staff hustling kids into raingear and a lead for the project. “And to get them outside, while working with teachers on a whole new science curriculum.”

The project is rooted in a major study done by Zoo conservation engagement staff, investigating how psychological principles of empathy could be applied to nature and wildlife. Research shows that urban children – especially those in high-diversity, low-income neighborhoods – have less and less connection to nature. One of Arlington’s school values is stewardship, but it’s hard to care for something you don’t feel connected to.

So in 2017, Zoo staff met with the Arlington school principal and staff to plan a nature-based science curriculum rooted in empathy best-practices. In May 2018 a generous private donor gave a grant for $749,000, enough to fund three years of staff time and resources (including rain jackets).

“Okay, who has ever planted a bulb before?” asks Standridge. He and half the class are standing in a grassy clearing at the top of one of Oak Tree Park’s paths – and he’s holding a bag of camas bulbs.

Nobody puts their hand up. Standridge talks them through the process by asking questions, like a scientist would: What would a bulb need to grow? Which way up? He also gently pulls in facts they’ve learned in the first two weeks of this unit on wildlife and place, including how Native Americans used native plants like camas.

Pretty soon students are paired up with trowels and are digging determinedly at the hard November ground. The other half of the class has stayed down on the park’s bicycle trail, drawing chalk murals about what they’ve learned about the salmon life-cycle.

“We spend one week inside the classroom,” Standridge explains. “The next week we apply those things we learned in the school yard: planting flowers, studying biomes or whatever. In the third week we walk across to Oak Tree Park to have the lesson there. The final week is a summary, back in the classroom- then we start the next unit.”

Every single one of Arlington’s 450 students, from kindergarten through fifth grade, gets one Wildlife Champions science lesson per week. Zoo staff sit down with teachers every few months to develop curriculum, which will be refined over summer based on data collected on student learning and empathy, as well as lesson functionality. The lessons not only hit Next Generation Science Standards but those in language, math, social studies, music and art: think soundscapes in nature, or building windsocks.

Science for the community

As well as Zoo staff, experts from Northwest Trek, Metro Arts and Tacoma Nature Center co-teach lessons as Arlington staff get more familiar with the material.

“We’re developing this project with the school, not for the school,” explains Standridge.

The curriculum will then be taught again over the following two years, with each student getting a different experience based on their grade. School staff will gradually take over the teaching process, becoming experts themselves in the local natural neighborhood.

Students also get a field trip to the Zoo and, virtually, to Northwest Trek.

Finally, the project will pull in families and the whole Oak Tree Park community, thanks to a Spring Into Action day on April 27 with guided walks, park restoration and activities; and a School Celebration day in June that showcases student accomplishments. Wildlife Champions even continues into summer, with a week of free nature camp (including breakfast and lunch) for each grade, held inside the park.

“As the kids learn about nature, they can teach their families,” says Standridge.

It’s already happening. After the planting session, the class gathers around Standridge to hear instructions for the chalk salmon murals.

“They’re a keystone species,” he explains. “They’re so important that if they went extinct, dozens of others would go away too. That’s why we learn about them – so we can protect them.”

Every student falls silent, intently focused on the words. They create intricate murals, adding so many biological details that they don’t want to leave when the lesson’s over. A message on one mural sums it up: “Yo, people. Don’t kill salmon.”

And on the walk home, snippets of conversation hover in the quiet fall air.

“It’s reinvigorated my love of teaching and learning,” says a teacher, of the whole program.

After the three years of Wildlife Champions finish at Arlington, the program will be handed over to school staff to lead, with Metro Parks still supporting lessons in Oak Tree Park. All the partners are hoping it can be transferred to other schools, spreading nature empathy and a love of science. 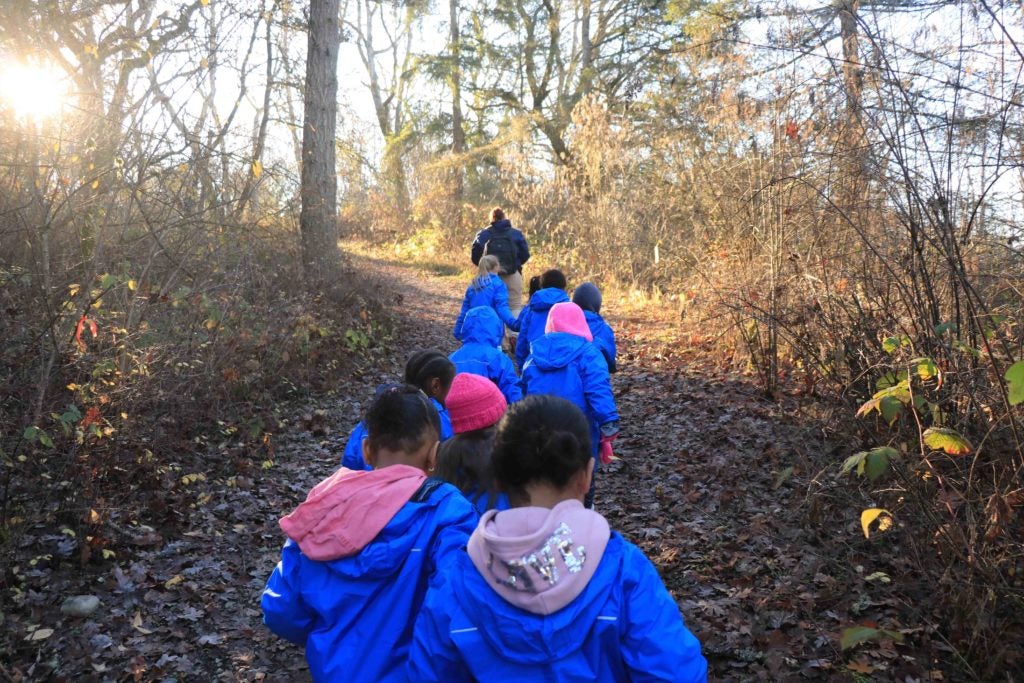