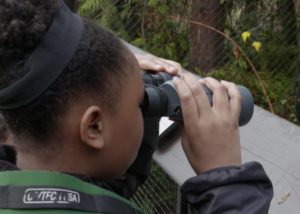 For 10-year-old Maya, it was a story come to life. The tall, quiet girl with long brown hair had always loved birds – especially owls – reading many books about them. Now, on a cold December morning, she was standing with her classmates of Arlington Elementary School in front of two real live snowy owls at Northwest Trek.

One swiveled his head 180 degrees, and Maya gasped with delight.

It was the Wildlife Champions field trip to sister zoo Northwest Trek Wildlife Park, and for many of them – including Maya – it was their very first time seeing animals like owls, bald eagles, moose and lynx in real life. The effect was spellbinding.

Now in its second year, Wildlife Champions is a partnership between Metro Parks Tacoma and Tacoma Public Schools that’s designed to teach empathy for wildlife through nature-based science. It operates at Arlington Elementary on Tacoma’s south side, a school with a large number of students on free or reduced-price lunch. Education staff from Point Defiance Zoo & Aquarium and Northwest Trek are in the school daily, co-leading classes that rotate between classroom, school yard and nearby Oak Tree Park.

And as students from kindergarten to fifth grade learn science through fun projects, arts activities, virtual field trips and nature study, they’re also learning how to care for wildlife and wild places.

Now over 200 third, fourth and fifth graders had arrived at Northwest Trek for a field trip that was bringing the books, notes and screens to dramatic life.

But the science never stopped.

“I see them! Okay, why are they called bald? Why would their heads be a different color?”

“And why do they need to do that?”

After excitedly pouring off four school buses and meeting their virtual field trip instructor MacKenzie Schaefer in the flesh, the Wildlife Champions split into class groups and headed around the park to find animals. But Jasmine Blackwell didn’t lose a single opportunity to get her fifth-graders thinking, observing and asking questions, just like real scientists, to learn about animal adaptations.

As her students discovered what eagles eat, they also heard the stories of the four injured, rescued eagles that now have homes at Northwest Trek. Faces fell at the idea of an eagle losing a wing to a gunshot, and learning to adapt to lower perches. Suddenly, the younger eagle, Sequoia, flew across the habitat, bouncing a little off the netting before coming back to rest. 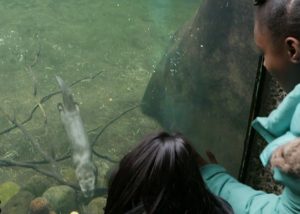 “It’s okay, boys and girls – she’s just learning her surroundings. When you were little, did you fall over a lot?” explained Craig Standridge, the Wildlife Champions co-coordinator from Point Defiance Zoo.

Nods all round, and Blackwell smiled.

“So why did we all say ‘ohhh,’ then?” she asked. There was a moment of thinking silence.

“Because it only had one wing,” suggested Jenaveve.

“Because that could happen to us,” said Julio.

“Because birds are beautiful,” added Maya.

“That’s right,” confirmed Blackwell. “So we’re feeling empathy, right? What if the bird were a caterpillar – should we feel the same way?”

“Okay, we’re making some progress,” said Blackwell, and moved the group on. 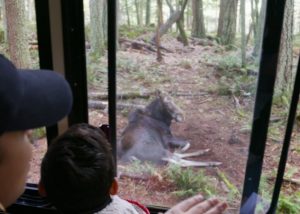 After spotting Omak the Canada lynx (“Why does he have such big feet?” questioned Blackwell), the class wandered down to the tram tour station, admiring all the antlers on display there. Piling onto the tram, they pulled out worksheets and started observing: wetland, meadow and forest habitats, prey and predator roles, camouflage needs, food availability and all the adaptations that went with those.

Sure enough, there was Willow the moose, lounging comfortably by the tram road with glossy coat and calm stare.

After lunch it was down to find the bears, followed by beaver, otter and raccoon, each more exciting than the one before and each prompting endless questions and answers: “What kind of paws do they need? How would they find food? “What does that sound mean?”

“I love this,” said Jenaveve, 10, who’d just started at Arlington and was already impressed by the science learning of Wildlife Champions. “We are learning so much about animals and nature and how to look after them. My favorite animals are the eagles.” 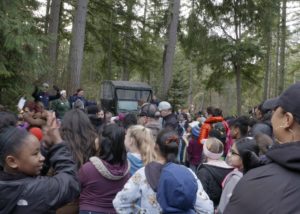 “My favorite animals are owls,” confided Maya shyly. “I read a lot of books about them. And today I got to see them! I think we all need to protect nature, especially birds, because they are beautiful, and some are endangered.”

“I see the goal of Wildlife Champions as expanding the way our kids think about nature,” she says. “All year we’ve been doing projects around animals and nature, getting the kids to where they’re out in nature, they claim it, they own it, they take care of it. This field trip expands that experience out beyond their immediate location, so they see wildlife not as something exotic and far away, but living right here among them. My hope is that they will take what they’ve seen and learned here and tell others who are not so fortunate to come.” 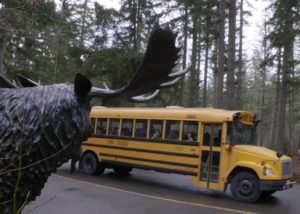 At 1:30 p.m., all classes began filing reluctantly out and onto the waiting buses. Waves and smiles followed excited chatter about which animals were seen, how tall the trees were – and about the real frozen rats fed to the bald eagles at the final Keeper Chat.

Around a dozen Zoo and Northwest Trek staff stood waving goodbye to the faces pressed against the glass; then the buses drove off. A sudden quiet filled the park.

“Northwest Trek’s purpose is to connect people with nature,” explained education curator Jessica Moore, as staff moved back inside. “Wildlife Champions is an important part of that, because kids are the ones who will be protecting nature for us, for them and for the future.”