The aquarist team had gathered in the South Pacific Aquarium isolation pool at Point Defiance Zoo & Aquarium, with three veterinary staff in waders waiting in the wings.

The nurse sharks were about to meet the vet for a check-up.

“It’s a team effort,” explained Marc Duncan, assistant curator, as he assembled everyone in the food prep kitchen to go over the plan.

Point Defiance Zoo has nine nurse sharks, and two were getting wellness check-ups today. The sharks – Number Two, known for his big appetite, and Number Nine, nicknamed “Barney” for his big frame and luminous purple hue – had been coaxed earlier with salmon treats into the isolation pool. A small, three-foot-deep section above the main Outer Reef habitat, it can also be sectioned off with a gate for occasions just like this.

As Two and Nine swam unhurriedly around the pool, Duncan briefed his team, all clad in wetsuits, boots and gloves. The wellness exam would include length and weight measurements, a blood sample, ultrasound and overall assessment. While nurse sharks don’t have to continuously swim to breathe, the team still wanted to keep the exam under 15 minutes. A hose was set up to continually pump oxygenated water over the sharks’ gills, for extra comfort.

Everyone took their stations. Duncan and Chris Spaulding took the front end of the stretcher, two others took the middle and two more the tail end. Cindy Kagey positioned herself by the pump hose. On land, Stacey Misura prepared to take notes and keep time, while intern veterinarian Dr. Lauren Mulreany set up a portable ultrasound machine with a protective towel.

Gently, Duncan herded Two into the stretcher, and the team scooped him along to where Kagey was waiting with the hose. Two squirmed, splashing – at the tail end, Kat Forrest smiled and shut her eyes briefly against the water drops – then he calmed down. 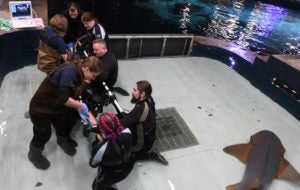 “Rolling!” echoed the team, and twelve hands gradually worked the shark upside down – a position where sharks will naturally become almost asleep, unaffected by their environment.

Dr. Mulreany went to work, uncovering her machine and rolling the ultrasound wand over Two’s smooth pink skin to scan his thyroid for any unusual signs.

Down at the tail end, zoo veterinarian Dr. Kadie Anderson hopped into the water and took a syringe from veterinary technician Julie Lemon.

“Getting blood from humans is easy – you can see the veins,” Dr. Anderson noted, afterward. “But with sharks, you just have to know where you are going.”

Through it all, Two rested serenely, with just the occasional twitch. Samples drawn and ultrasound safely wrapped up, the vet team sat on the edge of the pool. 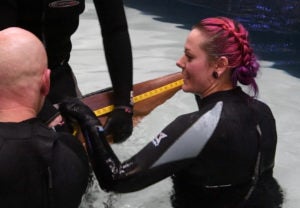 “Over!” Duncan called, and “Over!” replied the team, swiveling Two back to upright and hanging on as he splashed and readjusted with a massive, all-muscle frame.

Duncan scratched his back. “It’s like handling a line-backer wrapped in sandpaper,” he smiled.

On land, Becky Shelton handed him a 100-foot tape measure and each aquarist carefully threaded it under the stretcher against Two’s body. For a split second, the shark held quite still.

Moving as one, the aquarists sloshed Two through the pool to where Shelton had lowered the hanging scale. Duncan hooked it through ropes on either end of the stretcher, then adjusted Two’s weight as he was lifted slowly up, out of the water.

Everyone seemed to hold their breath as the scale settled on a number.

The stretcher sank back down, the team opened it up and after a moment’s pause Two glided out. As the seven humans stood around the edge, catching their breath, both nurse sharks wove serenely between their legs.

And the second exam began. 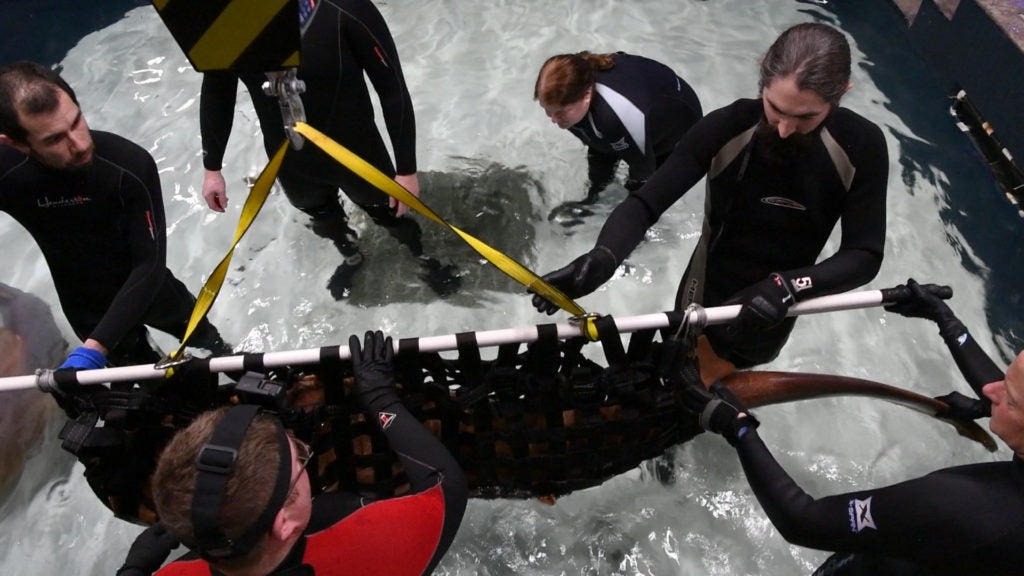 Good for sharks and people

“Both sharks look really healthy,” said Dr. Anderson, after Nine had been scanned, measured and sampled for blood.

As Kagey lifted out the hose, Dr. Mulreany packed away the ultrasound and the aquarists climbed out of the pool, Duncan stayed behind. Sometimes he’d have handfuls of salmon to reward the sharks, but today it was a tub of shrimp. He scattered the shrimp through the water, but nobody was interested.

Duncan shrugged, and opened the gates.  “This is a big thing for all of us,” he said, watching Two and Nine swim out to rejoin the other massive sharks. “It really helps us build our trust and work with each other. And it gets our sharks comfortable with us, to help us take care of them.”