There’s a cool new cat in town, and he’s making his official public debut this weekend, with appearances in the main Asian Forest Sanctuary Waterfall Exhibit at 12:30 p.m. on Saturday and Sunday. Our keepers will talk about Bandar and give him some enrichments. 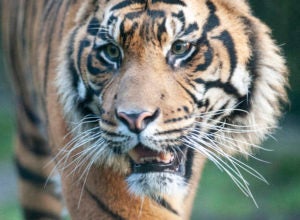 His name is Bandar, and he’s a 5-year-old male Sumatran tiger here to help his endangered species grow in numbers through the Association of Zoos & Aquariums’ Species Survival Plan (SSP).® Tigers in North American zoos number in the 70s, and only about 300 remain in the wild on their native Indonesian island of Sumatra.

Bandar, born at Smithsonian’s National Zoo on Aug. 5, 2013, is a potential mate for our female Sumatran tigers, Kali, 5, and Kirana, 4, both of whom were born here at the Zoo.

Males Mohan, 14, and Dumai, 6, also live in the zoo’s Asian Forest Sanctuary habitat. Dumai is the brother of Kali and Kirana. 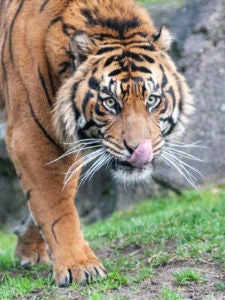 However, Dumai, who was also born at Point Defiance Zoo & Aquarium, is about to leave us for Wildlife Safari in Winston, Ore., under a recommendation by the SSP. His farewell happens this weekend, and he’ll be part of the Asian Forest Sanctuary keeper chats at 12:30 p.m. each day.

“We are delighted to welcome Bandar to Point Defiance Zoo,” said general curator Dr. Karen Goodrowe Beck, who holds a Ph.D. in reproductive physiology and serves as vice chair of the Sumatran tiger SSP. “Maintaining genetic diversity among the population of Sumatran tigers in North America is critical to our conservation mission for the species,” she added.

Sumatran tigers are on the brink of extinction in the wild, due to poaching, habitat loss and other  human-tiger conflicts. Point Defiance Zoo & Aquarium annually supports anti-poaching efforts in Sumatra through The Zoo Society’s Dr. Holly Reed Wildlife Conservation Fund. You can also help us protect their habitat by choosing household products with sustainable palm oil.

Meanwhile, Bandar is settling in well to his new home. Come meet him!