Behind the Asian Forest Sanctuary at Point Defiance Zoo & Aquarium, volunteer Scott Murdock has disappeared behind a vine. The massive spread of large, furling leaves engulfs Murdock’s head, leaving visible just legs on a ladder. Sprawled in the sun, the vines smell rich and green. It’s the Zoo’s kiwifruit arbor, and Murdock gently twists off the last of around 4,800 fruit – a record harvest that will end up feeding animals from lemurs to grizzlies.

“Everyone benefits from eating the kiwi: omnivores, herbivores, insectivores, even some of the carnivores,” says Natalie Davis, the Zoo’s curator of land animals. “For some, it’s a food enrichment. For others, it’s part of their daily diet: lemurs, tortoises, lizards, beavers, bats, sloth, skunk, millipedes and parrots.”

But the Zoo’s kiwis are not just food. They’re a perfect marriage of animal care and horticulture. Bryon Jones, the Zoo’s horticulturalist, creates a beautiful landscape, but he also fills every corner he can with plants that either replicate the animals’ natural environment or can be harvested for them to eat or explore. Over the years the Zoo’s “browse garden” has given maple and willow leaves to muskoxen, bamboo and banana to elephants and much more.

Ten years ago, Jones began planting kiwi vines. The location was perfect – sturdy trellises on the back side of the Asian Forest Sanctuary building, where they soaked up the sun and shaded the walkway beneath like an Italian terrace. Jones used rich compost and mulched heavily. But young kiwi vines take several years to mature. Even correctly identifying the male and female, done by looking at the flowers, takes time. 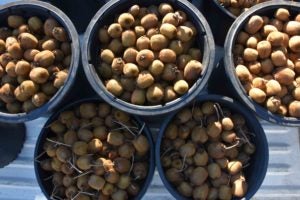 For the last five years the females have borne fruit. But this harvest was a record-breaker: over 4,800 kiwis, weighing in at 586 pounds and quadrupling the previous best. Some 4,500 came from a single vine.

“This is just awesome,” said Jones, hauling buckets of fruit onto the Zoo truck. “It’s so fun to provide that enrichment, and see the animals’ excitement as they devour or play with it. It’s good-quality food that helps keepers enrich animals’ lives and encourage natural behaviors.”

Plants for animals (and humans)

But Zoo-grown plant enrichment is also fun for visitors who participate in Jones’ annual Leafy and Fruity Hors d’Oeuvres plant tour (10am Sept. 5, 2021). Taken behind the scenes, they get to see which plants are grown for which animal and why, even occasionally harvesting some themselves.

Right now, though, it’s all about the kiwi. Although this Asian native grows well in the Pacific Northwest, it doesn’t ripen on the vine. Instead, Jones and his crew will carefully store the kiwis where they’ll be exposed to ethylene, a naturally-occurring gas that ripens fruit (just ask anyone who has ripened tomatoes by putting them in a bag with a banana).

Then, gradually, they’ll be delivered to Kids’ Zone, Wild Wonders Outdoor Theater and Asian Forest Sanctuary keepers to give to animals. They’ll also become food for grizzly bears, black bears, raccoons, moose and elk out at sister zoo Northwest Trek, which received two buckets of the Zoo’s kiwifruit after harvest.

“It’s great we had enough to share,” says Jones.

But the future could be even more kiwi-full. When the younger vine matures and Jones has refined his pruning strategies, he thinks the harvest could get to around 10,000 fruit. That’s a lot, even for a zoo that uses two pounds of fruit every single day.

“It’s all about caring for animals,” says Jones. “We all work to make their lives better.”