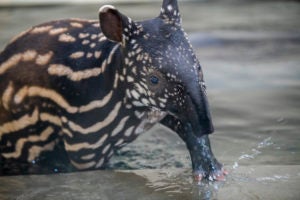 But before he does, he needs a name.

Members of the public were invited to vote on one of five names chosen by keepers in the Asian Forest Sanctuary, where the calf has been living behind the scenes with his mom Yuna.

The slate of names is inspired both by the Japanese names of his parents Yuna and Baku, by Asian food items and two Western names. It includes: 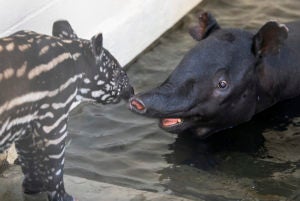 Since his birth, the calf has been nursing, growing and getting accustomed to people behind the scenes. He is now nearly ready to explore the outdoor habitats. Now weighing 68 lbs, he is still nursing but adding new foods like banana, apple, pear, yam, carrot, romaine and grains to his diet.

He has also been exploring a small pool. Tapirs are good swimmers, even using their long nose as a snorkel, and each of the five habitats in the Asian Forest Sanctuary has a water feature.

“We want him to be comfortable around water before he goes into those habitats,” said Telena Welsh, senior staff biologist for the Asian Forest Sanctuary.

The calf, like all of his species, was born with white spots and stripes, a little like a watermelon – an adaptation that camouflages and protects young tapirs in their native jungles of Southeast Asia.

The species is listed as endangered by the International Union for Conservation of Nature. Only an estimated 2,500 remain scattered in Thailand, peninsular Malaysia and the Indonesian island of Sumatra.

The calf’s birth came as the result of a breeding recommendation for Yuna and Baku by the Association of Zoos & Aquariums’ Species Survival Plan® (SSP) for Malayan tapirs. The SSP looks at the genetic makeup of each prospective parent before recommending a pairing; this helps ensure diversity of Malayan tapirs in North American zoos.
“Nothing in our mission to practice and promote effective conservation on behalf of the world’s wildlife is more important than the births we’ve witnessed at the zoo this spring and summer,” said Alan Varsik, director of Zoological & Environmental Education for Metro Parks Tacoma.