In the Budgie Buddies exhibit early one morning, there’s a sudden hush. It’s the sound of 100 brand-new budgies, all perched in a row on the roof, and all stopping their chatter in one unified moment. Then abruptly, they dive in perfect formation, like a flashing school of fish, and swoop back up to restart their chirping conversations.

“Now we have around 200 birds in here, twice as many as before,” says staff biologist Adrienne Umpstead, with a smile. “It’s noisy, but it’s fun. And the new ones are still exploring the habitat.”

Learning how to ‘budgie’ 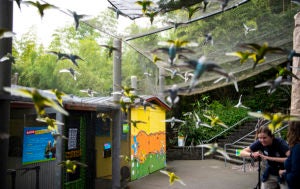 The new budgies arrived last month, around 8-10 weeks old, and have just moved into the main habitat after receiving the all-clear from their physicals. While they’re the same size as the adults, they won’t be mature for at least six months, and still have a few “baby” characteristics.

One of those is a forehead with horizontal “bars” or stripes, says Umpstead, although not all the group have this characteristic that will disappear when they first molt, or change out feathers.

Another is an endearing clumsiness as they fly around and learn all the perches, branches and ropes that keepers change out daily as enrichment.

“They’re not quite all sticking their landings at the moment,” says Burns, looking over her flock to check on everybody. “They’re still learning how to budgie. But they’re doing fine.”

Stay off the ground, guys 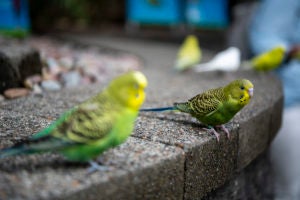 The new birds are also still getting used to the outside world – “They had their first experience of rain the other day!” says Umptead – and to humans with yummy seed sticks.

“Guests might see a lot more budgies walking around on the ground,” says Umpstead. “That’s okay – it’s normal food foraging behavior. But obviously we want to encourage them to get higher up, for safety.”

So part of caring for baby budgies involves patient patrolling with a wide broom, to gently shoo budgies upwards.

“If you’re visiting our budgies and you see one near on the ground, just stand still until a staff person can move them away,” advises Burns.

Umpstead, Burns and other keepers are getting to know each of the new budgies’ personalities, and how they fit within the group. (In the wild in Australia, budgies live in huge colonies of up to 25,000 birds, with a definite social structure.)

They’ll also gradually discover who’s a girl and who’s a boy, through color changes in their cere (the area above the beak) and other methods.

And now there are 200 budgies, keepers are also getting even more creative with enrichment items, swapping them out daily: woven basket shapes, trailing streams of paper. Even the zoo’s summer camp kids are helping, making budgie play items out of paper plates. 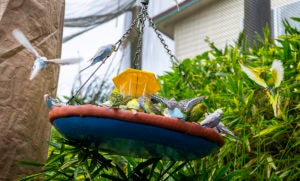 But one of the most fun parts of adding 100 new birds to your budgie family is choosing names. Traditionally, when budgies are born at the zoo, all the birds in a single clutch get whimsical names related to each other: the Star Wars clutch, or the pirate clutch.

“Knowing they were coming, we started making a list a while ago,” smiles Umpstead.

So there are budgies named after candy in the “Harry Potter” books – Fizzing Whizbee, Honeyduke, Bertie Bott. Some names are inspired Australian actors – Hemsworth, Heath, Kidman – and some are just fun: Skedaddle, McFlurry, Jeeves.

Meanwhile, keepers are getting to know the new birds – an essential part of caring for them, but quite a process with 100 birds.

“We look at budgies a lot,” says Burns, drily, as the flock swoops around her in an excited flurry of green, blue and yellow.

Previous Article
Next Article
labels:
You Might Also Like
Dragons, Dinosaurs and Tim Tams: Meet the Budgies
It’s like being inside a cloud of excited children who’ve all been given a bright yellow jacket and two cups of coffee. We’re inside Budgie Buddies on a sunny spring … Continued
Learn More
See All Articles