He head-butted some rocks. He tasted some clover. Then he galloped back down the hillside to mom.

Yes, it’s official – our baby muskox calf is a boy, and now his fans get to vote on his name. (UPDATE: Voting closed 12pm July 8.)

The veterinary and animal care team confirmed the sex last Friday when the calf’s mom Charlotte was finally confident enough to let them get close enough for a check-up. Working quickly to keep mom happy, they weighed the calf (a whopping 52 pounds, double his birth-weight on June 14), checked his umbilical site (healthy), listened to his heart and lungs and determined that yes, he was definitely a boy.

“We’d been suspecting that for a few days, after he began some head-butting behaviors,” explained keeper Russell Pharr. “That’s a typical instinct for male muskoxen, as later they’ll have to show their dominance for breeding.” 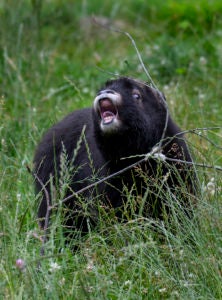 The little guy is also starting mock sparring with his mom, who “humors him and goes along with it,” Pharr says. He’s starting to graze on grass but will still get most of his nutrition from nursing for the next few months.

Zoo fans got to vote on the calf’s name from a slate of keeper choices:

Stay tuned for the winning name!

But the most exciting thing for the calf happened Monday, when keepers opened up the biggest Arctic Tundra area – newly babyproofed – for him and Charlotte to explore.

Charlotte was keen to get back to munching her favorite clover. But for the calf, it was a whole new world of exciting, lichen-covered rocks, long grass, sloping hillsides and new views out over the Zoo. On chubby, endearingly clumsy legs he darted from rock to rock, investigating branches and running laps before coming back to Charlotte’s side to touch noses.

“He appears quite healthy,” said Dr. Karen Wolf, head veterinarian. “The veterinary team has been observing him regularly and he is very active and inquisitive, investigating his environment and starting to run around and demonstrate his spunky personality.”

The pair will be out in the big space every day for visitors to spot, unless they choose to spend time inside. Dad Hudson will roam the other space, while the herd matriarch Mya is spending some time behind the scenes after dental surgery. 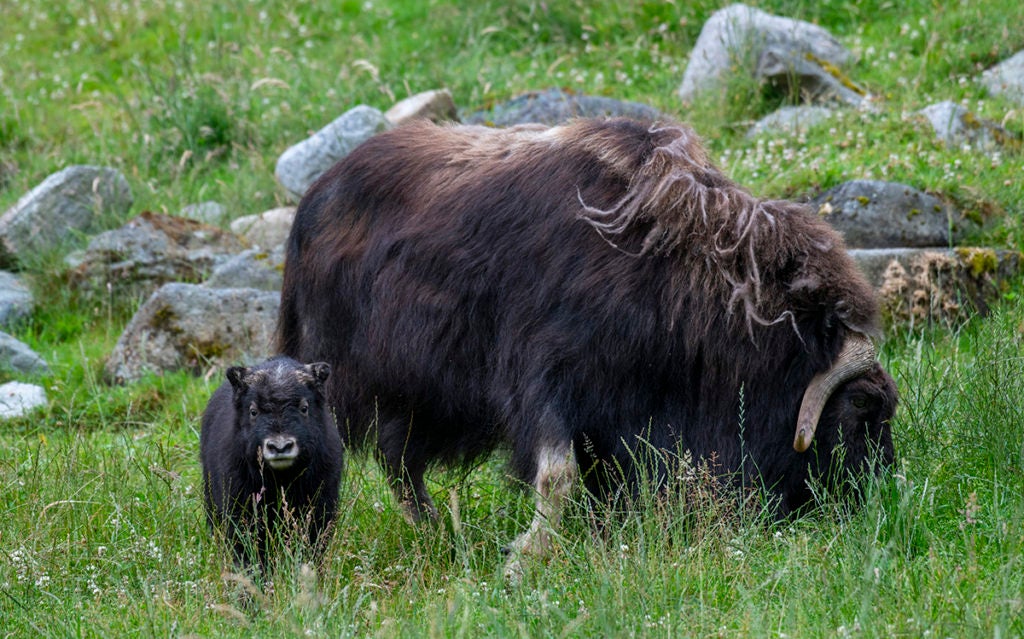