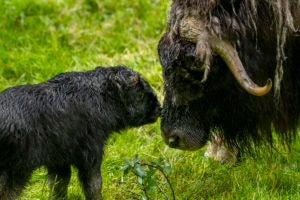 Whatever the gender, it’s pretty perfect timing for a birth announcement.

Early Sunday morning at Point Defiance Zoo & Aquarium, Charlotte, a 621-pound muskox, gave birth to a calf, just as the Zoo was preparing to announce its June 18 reopening under Phase 2 of the governor’s Safe Start plan.

The calf appears to be healthy, and in typical muskox fashion is already wandering around the grassy tundra habitat, sticking closely to mom. But the gender? That won’t be known until Charlotte is comfortable with having veterinarians and keepers get a little closer.

“The calf appears to be vigorous, and is becoming more steady on its legs,” said head veterinarian Dr. Karen Wolf, who has been visually examining the calf daily from a short distance. “It’s remarkably cute, and off to a good start!”

Assistant curator Shannon Smith confirmed that the calf was nursing well, and vocalizing to five-year-old Charlotte – a sign of clear lungs as well as mom-calf bonding. Hudson, the calf’s father, was born in 2016 and arrived at Point Defiance Zoo as a calf himself.

Muskoxen are grazing herd animals, roaming tundra and prairies of Greenland, Alaska and northern Canada, and calves are born able to walk and keep up with the herd almost immediately. While the Point Defiance Zoo calf isn’t actually grazing, it is mouthing grass in imitation of its mother, Smith says.

“Charlotte is very protective, and she’s taking great care of her calf,” added Smith. “At some point she’ll become more confident to let us get near it for a closer exam, but we are following her timeline.”

Meanwhile, keepers are gently approaching the perimeter of the habitat and offering willow leaf browse – Charlotte’s favorite – to get the pair comfortable with their care team.

“We want the calf to know and trust us, so we’re following Charlotte’s lead,” Smith says.

About the size of a Labrador, the calf is dark brown with white legs and a small white patch on its shoulder. Unlike its parents, it has no fluffy underwool (qiviut) or horns. Those will gradually grow in, with buds becoming visible in three or four months and the horns themselves early next year. Smith estimates the calf weighs around 20-25 pounds – a long way from Hudson’s 663 pounds.

The Zoo has a third muskox, Mya, who just turned 17 – the matriarch of the herd. Point Defiance Zoo is one of only three in the U.S. that care for muskoxen. Charlotte’s pregnancy was confirmed earlier this year by fecal hormone testing, and lasted 8 months – typical for a muskox at lower latitudes such as Tacoma, Washington.

Until the calf is bigger and stronger, it will stay with Charlotte in the smaller side yard in the Arctic Tundra habitat, where there is a stall for shade. Guests may or may not see the pair, depending on where Charlotte decides to be.

Muskoxen are an ancient species, having grazed the tundra for thousands of years. Their numbers were greatly reduced from hunting by the early 20th century, but the Northwest Game Act of 1917 allowed for conservation efforts that helped their recovery, and there are now around 80,000 muskoxen in the wild.

For more information about muskox, go to pdza.org/muskox.