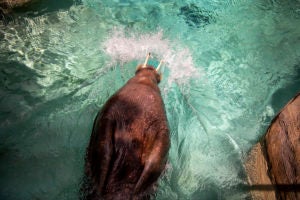 Have you met Mitik and Pakak yet? Our young male walruses are definitely growing and showing their personalities! They moved here last year as part of a nationwide walrus breeding program, but being only eight years old they’re still in the “teenage” stage.

And if you know teenage boys, you know things can get quite exuberant.

“Grnnhhhhh!!” utters Pakak, hoisting his enormous, blubbery frame onto the edge of the pool and tilting long tusks back.

“Phbbbbbhhbb!” adds Mitik behind him, blowing an impressive cloud of bubbles between his shorter, thicker tusks.

Pakak flops backward into the pool with a massive splash, continuing the slow-motion back flip and emerging with a long, piercing whistle. Mitik butts him gently, and the two disappear underwater for a mock-tussle.

“They’re young, energetic boys who like to get as much attention as they can – and get into whatever they can,” says Amanda Shaffer wryly.

The assistant curator at Rocky Shores has, like all the keepers, spent the last few months getting to know Mitik and Pakak: observing, training, measuring and generally finding out what makes them tick.

Rescued as orphaned calves in Alaska, the two walruses spent their first few months together, with intense human care. They then went to live in different zoos, and were reunited here at Point Defiance Zoo. So they’re extremely comfortable with each other – and with humans.

And like teenage boys, they’re also trying out adult behavior. When walruses mate in the wild, males will battle to be king over a harem of females. So Mitik and Pakak are doing a lot of play-fighting and wrestling. They’re also growing – gaining hundreds of pounds since their arrival – and making a lot of noise with whistles and bellows.

The extra audience attention now that the Zoo has reopened doesn’t hurt, either.

Keepers measure their testosterone levels weekly via blood samples (both walruses willingly offer a flipper for this) to determine when they officially begin and end rut, or mating season.

Eventually, that will be a very important thing. In the wild, walruses breed in large colonies. As there are only 14 walruses in North American zoos, the Walrus Conservation Consortium – which includes Point Defiance Zoo & Aquarium – is working to create mini-colonies for breeding-age animals. Once Mitik and Pakak grow up, they’ll be vital to keeping the zoo-based population healthy.

“Not many people get the chance to visit the Arctic, where Pacific walruses live in the wild,” explains curator Malia Somerville. “This species is facing many challenges like climate change, which is melting the sea ice they need to find food. Zoo walruses like Mitik and Pakak are ambassadors for their wild cousins, inspiring people to care about them and take action to protect them.” 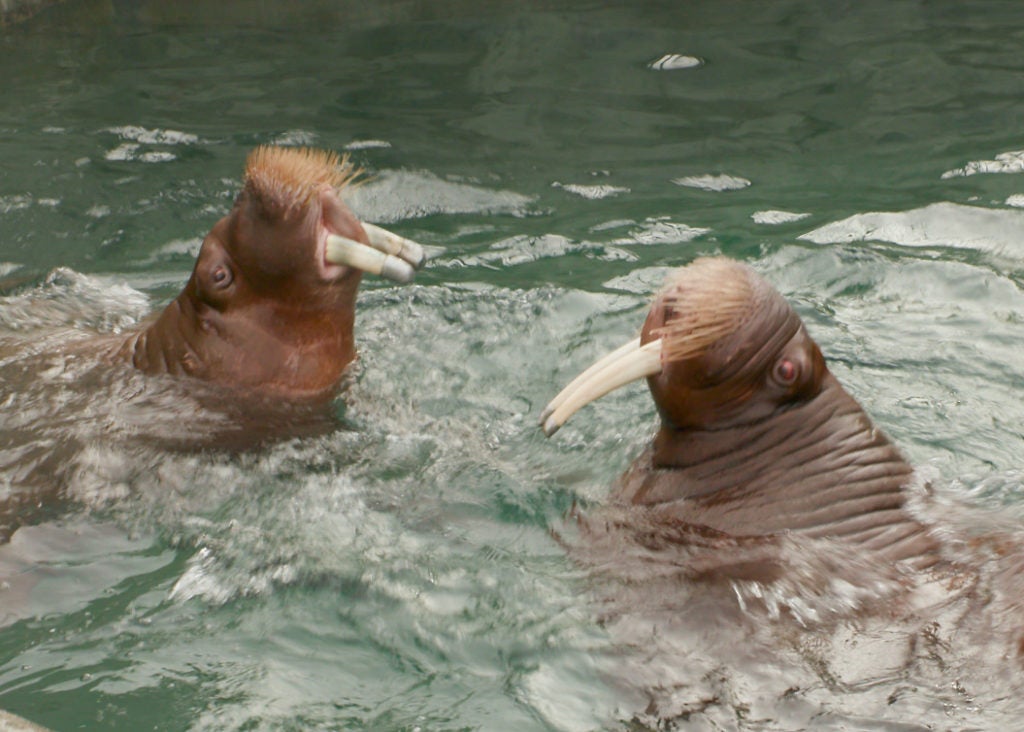 Previous Article
Next Article
labels:
You Might Also Like
Farewell, Walrus Boys!
They were rescued together as orphaned calves. Then they went to live at separate zoos for seven years before reuniting as “teenagers” here at Point Defiance Zoo & Aquarium. Now, … Continued
Learn More
New walruses getting along swimmingly
Point Defiance Zoo & Aquarium’s two new walruses Mitik and Pakak are adjusting well to their new home in Rocky Shores, even exploring different areas of the exhibit than other … Continued
Learn More
Two orphaned walruses reunite
They were rescued as orphans in the same week. They spent the next three months of their lives together, snuggling with keepers and each other. And now, after seven years, … Continued
Learn More
See All Articles