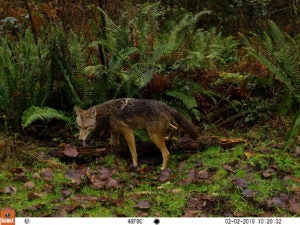 It’s a warm summer evening, and you’re out for a twilight walk. Suddenly, you spot a pair of bright eyes in the undergrowth. You freeze. A coyote steps out into the silence, bushy-tailed, followed by – yes! – three young pups. Quick as lightning, you whip out your phone and snap a photo. Alerted, they turn and swiftly vanish to hunt their dinner – and you upload the shot and location to a crowd-sourcing nature app, to feed into a study. Another triumph for community science!

Sounds futuristic? Actually, it could be you this summer, if you’re willing. The Grit City Carnivore Project, a partnership between Point Defiance Zoo & Aquarium, Northwest Trek Wildlife Park and the University of Washington Tacoma, has just launched its Carnivore Spotter, a website created by Woodland Park Zoo where regular folks can report sightings of coyotes, raccoons, even bears if you see them. All you need is a smartphone, tablet or laptop – and some curiosity about nature. Because your data will join wildlife observations from camera traps placed around Tacoma and beyond, feeding into a ground-breaking study about how urban carnivores are adapting to their biggest environmental impact: us.

And how are we adapting to them? Well, that’s the other part of the project.

How to love coyotes 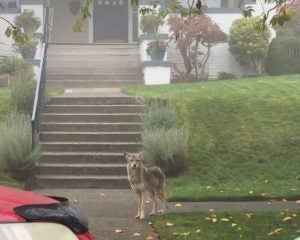 “People call us at the Zoo and Northwest Trek all the time about coyotes in their neighborhood – how to deal with them, whether they’re native,” explains Karen Povey, conservation engagement manager for both sister zoos. “There’s all this fear. But I was thinking how exciting it was that our neighborhoods could support wildlife like this. So I was wondering how to foster feelings of wonder and stewardship, rather than fear.”

Then, at a conference, Povey heard about the Urban Wildlife Information Network (UWIN), a project begun by Lincoln Zoo that now partners with organizations around the world to study wildlife patterns in urban areas. And quite by chance, a friend introduced her to a Tacoma scientist fascinated by the same thing: Dr. Chris Schell of the University of Washington Tacoma.

“It’s a perfect partnership,” says Povey. “We can combine our skillset of community engagement, science data collection and storytelling with UWT’s science strengths.”

And so the Grit City Carnivore Project was born. 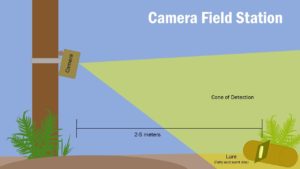 Since fall 2018, naturalists from the Zoo, Northwest Trek and Dr. Schell’s own lab have set camera traps around greater Tacoma along two transects reaching roughly south and southeast into Pierce County. Triggered by motion and aimed at animal height, the cameras pick up passing wildlife, from mammals to birds and even banana slugs. Four times a year, every season, the images are collected and sorted by 15 trained Zoo and Trek volunteers, plus staff, students and volunteers from UW Tacoma.

“Animals don’t usually stand still and pose for photos,” laughs Povey. “So it’s a lot like detective work: here’s an ear, or a tail, or an eye. Or maybe it’s just a leaf blowing in the wind.”

Or maybe something not so natural: One of the photos shows a toy remote car followed by a pair of legs. (None of the cameras is angled to pick up human faces, for privacy reasons.)

“Our volunteers must be able to spot the smallest of deer mice and the perfectly camouflaged ground birds that all help paint a picture of the urban landscape,” explains Zachary Hawn, Point Defiance Zoo’s conservation program coordinator, who works with Northwest Trek counterpart Rachael Mueller to set cameras, pull photos and train volunteers.

Once the photos are sorted and tagged, they go into the ever-growing UWIN database – to date, the GCCP has collected over 70,000 images.

And that’s where Dr. Chris Schell comes in. An assistant professor of urban ecology, Schell’s deep interest is how wildlife adaptations intersect with human activity like urban development, the Covid-19 pandemic, even psychology and racism.

“Carnivores like coyotes are linchpin species, bio-indicators telling us how healthy our ecological systems are,” explains Schell. “In my research, I’m asking three main questions. The first is, How do domestic and wild carnivores interact? Domestic cats are an important part of human-animal conflict, because they have such a detrimental effect on wildlife. They predate on rodents and birds, and compromise local biodiversity. The second question is, How are wild animals responding to human activity as a result of Covid-19? Are they changing their own activity patterns?”

While Povey and Schell haven’t really see any difference in animal behavior in recent months, humans are definitely staying home more and getting out into their neighborhood – which means they’re far more likely to spot wildlife they would have otherwise missed.

“In just one camera location – a cemetery – we saw a few more coyotes around noon or 1pm on some days,” Schell explains. “But on all our other cameras, we saw no coyotes at all between 8am – 1pm, yet we saw quadruple the number of humans.”

Finally, there’s a big third question – one that links the esoteric world of ecobiology to a very immediate human issue.

“I’m asking how biodiversity in animals is impacted by racism,” says Schell. “Structural socioeconomics and demographics are big factors for shaping where urban wildlife is found. This is known as the ‘luxury effect,’ where wealthy areas tend to have larger homes and yards, more established trees and habitat, thus more biodiversity. Understanding the history of a city is crucial to understanding how nature thrives in that city. In the last year that has become THE most important question for me, and I’m specifically calling out racism and classism in every part of this city.”

Honk if you love wildlife

But it’s not just camera trap data that will feed the Grit City Carnivore Project. It’s something a little more nebulous: Community sightings and feelings.

Last year, Povey and her team collected survey data on just how Tacomans feel about cohabiting with coyotes and other wildlife. The results ranged from negative (“Often correlated with cat-owners,” remarks Povey) to extremely positive. People don’t perceive coyotes as a threat to themselves, mostly, and many love the idea of sharing space with these iconic American animals (whose range was not originally western U.S.A but eventually came to be, thanks to settler migration).

There are also those who are keen enough to join Facebook groups to chat about neighborhood coyotes.

Now, though, with the Carnivore Spotter app, all that information and daily sightings can be pooled into a true community resource, which Schell can compare against his photo data.

“It helps us create a predictive model for areas of human-coyote conflict, and come up with creative, tailor-made solutions,” Schell says.

The team has also created a handy guide for Living with Coyotes. 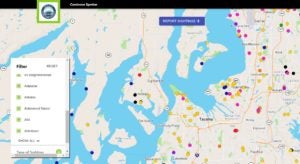 Reporting a coyote, raccoon or other carnivore couldn’t be easier. You don’t need a photo, although you can certainly upload one if you like. At carnivorespotter.org/tacoma – a program first developed by UWIN partner Woodland Park Zoo – simply hit the big blue “Report Sightings” button and follow the prompts for your location on a map, time, number and kind of animal. There’s space for optional other information, or uploads for photo, video or sound files. You can report on the spot from a tablet or phone, or do it from a computer.

Summer’s a particularly cool time to be coyote-spotting, says Povey, as pups born in spring are emerging from their dens with Mom and learning to find food.

Finally, you can cruise around the app to check out everyone else’s sightings, filtered however you like: by location, species or date.

“It’s super-easy to use, and we’re excited to have our community join in on this,” Povey says.

For Povey, though, it’s the photos that are the most exciting part – one that the rest of us can peek into as well on the GCCP website photo galleries.

“Every time we pull an SD card out of a camera it’s like a treasure hunt,” she smiles. “You never know what you’ll see! There’s such a wide variety of creatures that live right here in our neighborhood that we never see. I love that! And to generate that feeling of excitement for living with and caring for wildlife – that’s why we’re part of this project.”

Test your spotting skills! Can you ID these animals on camera trap images? Answers on the Eye Spy Answer Sheet 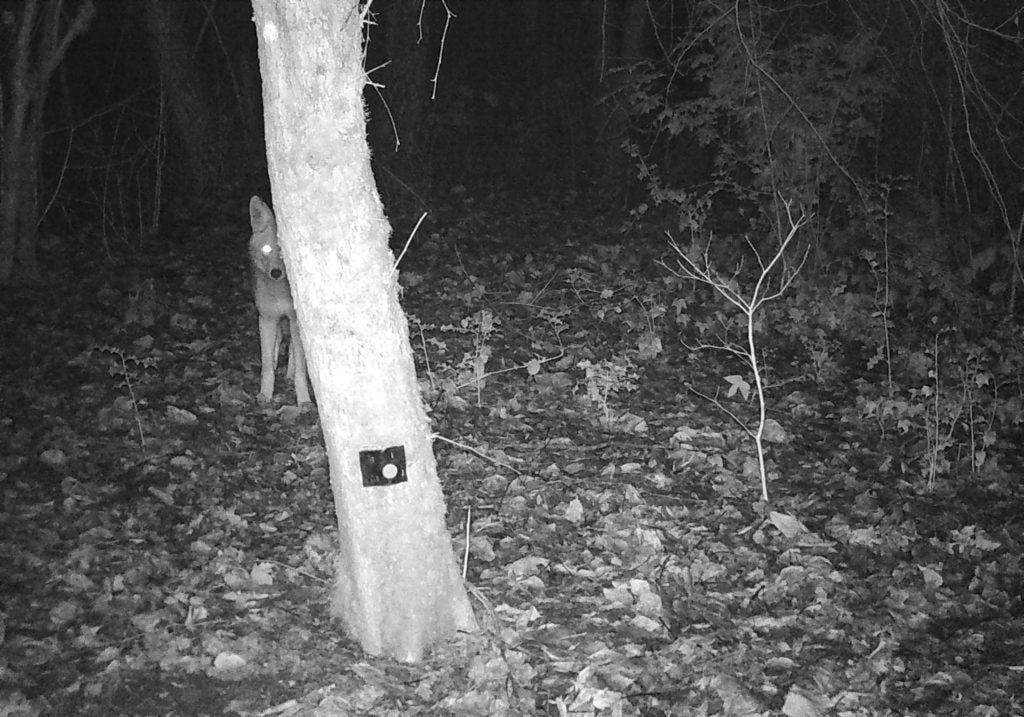 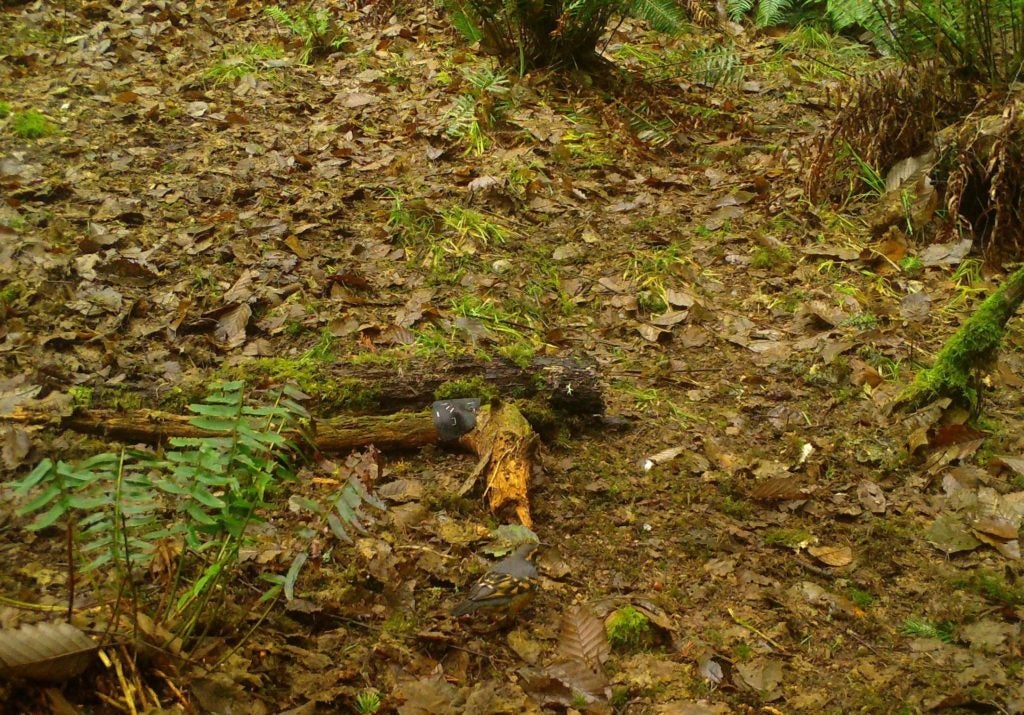 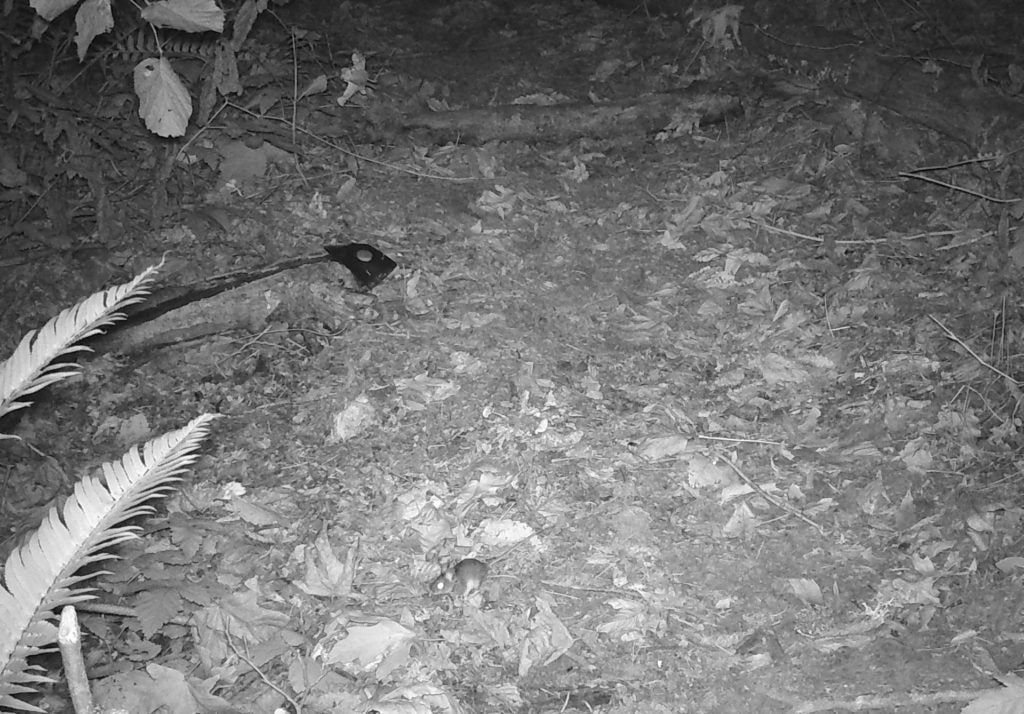 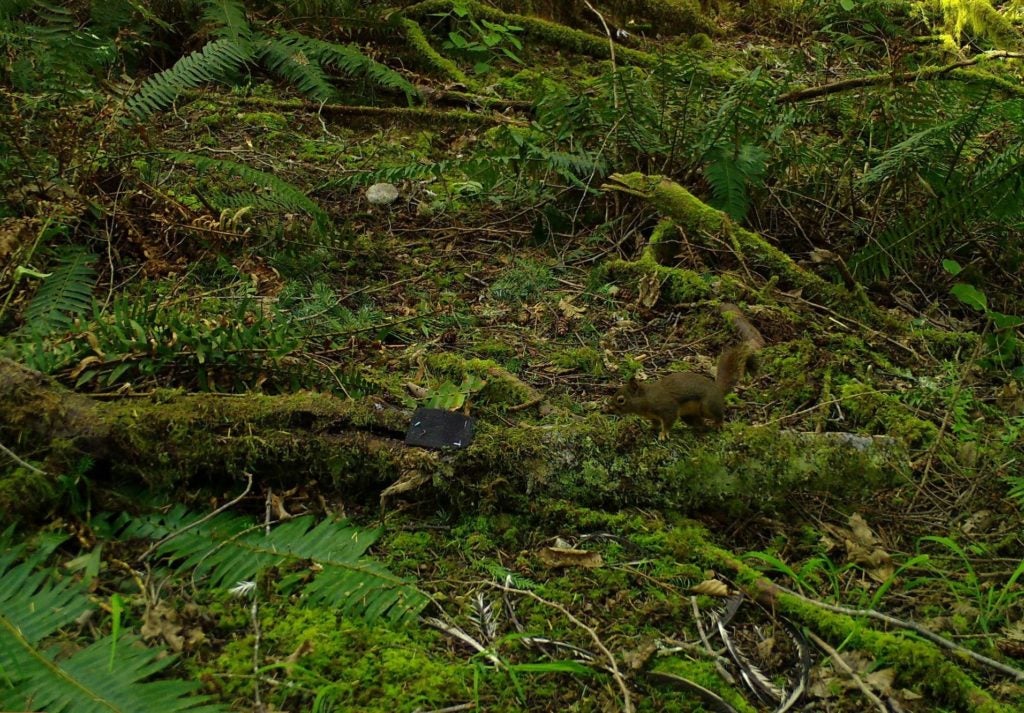 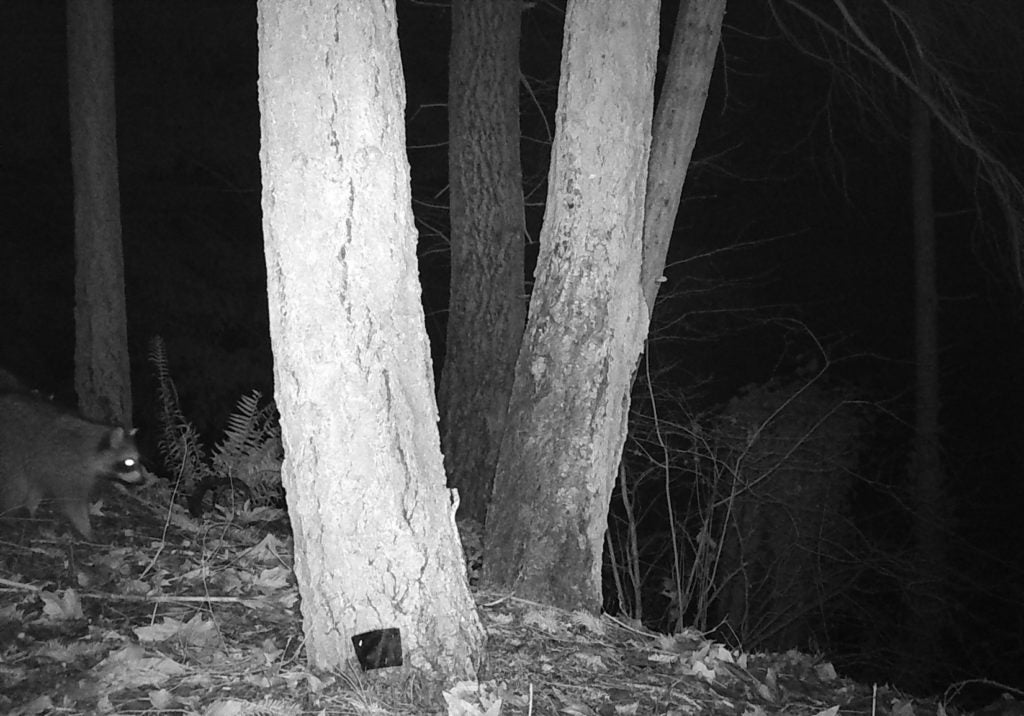 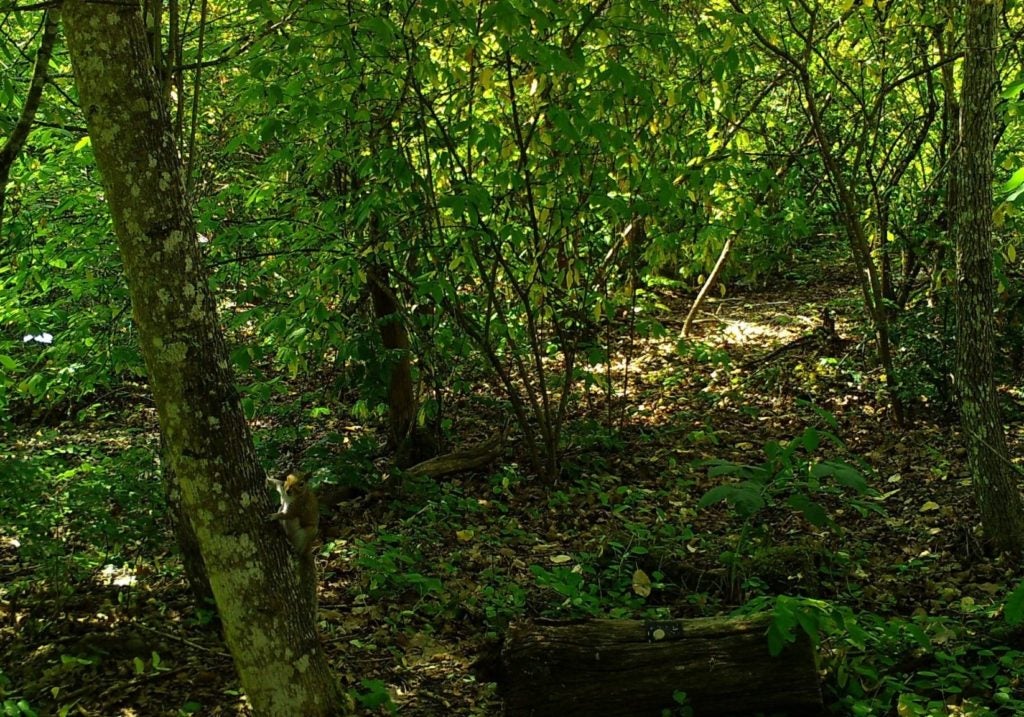 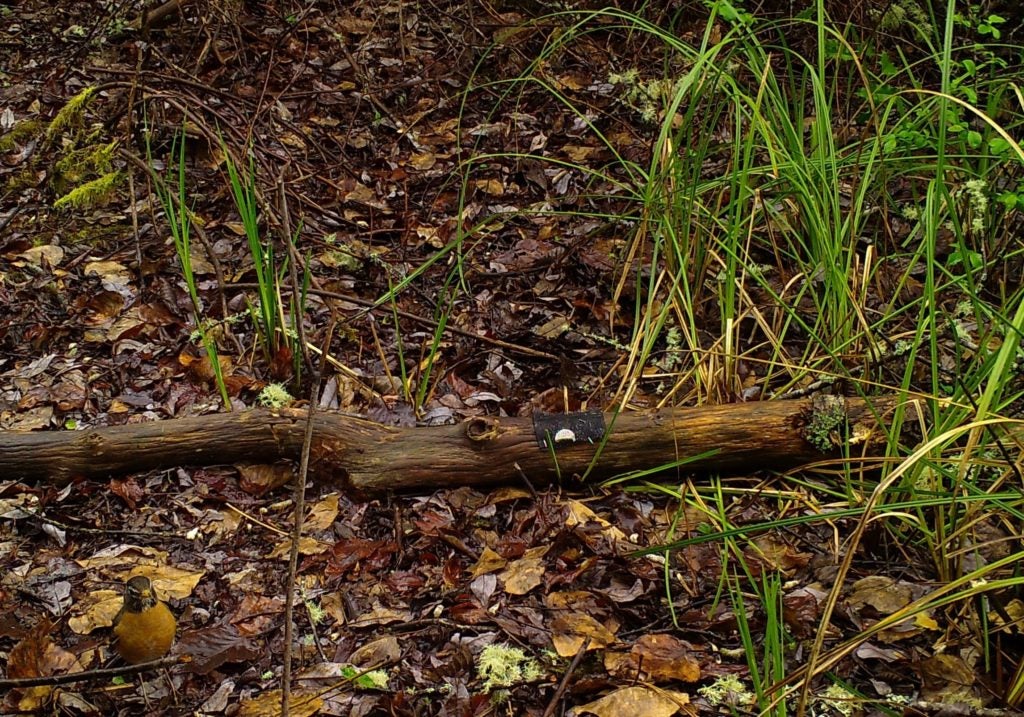 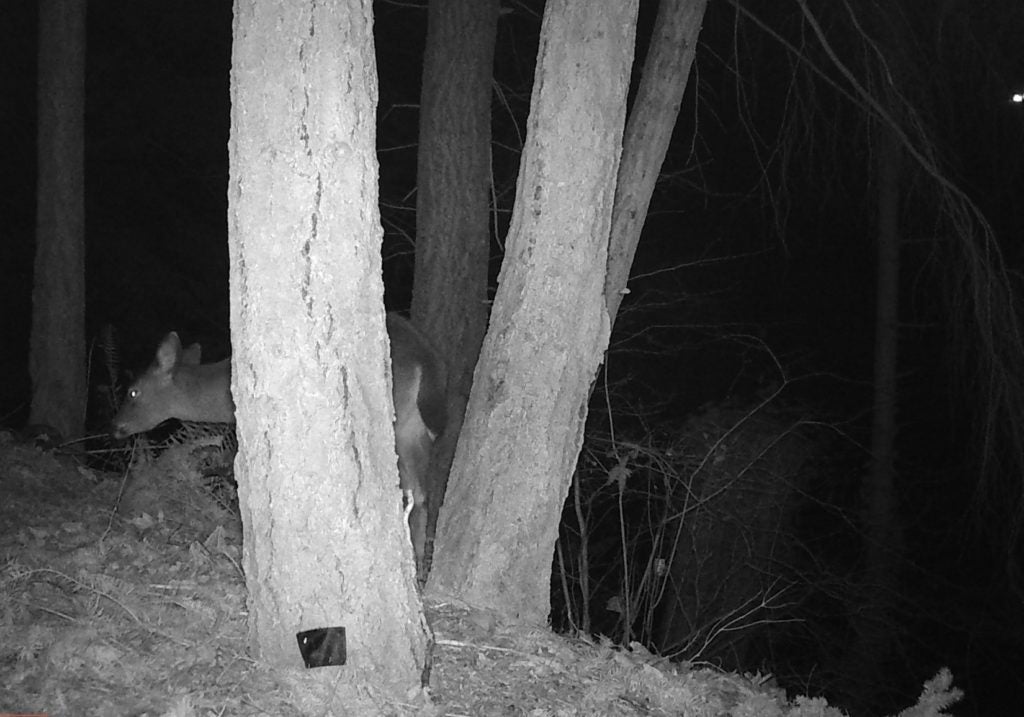 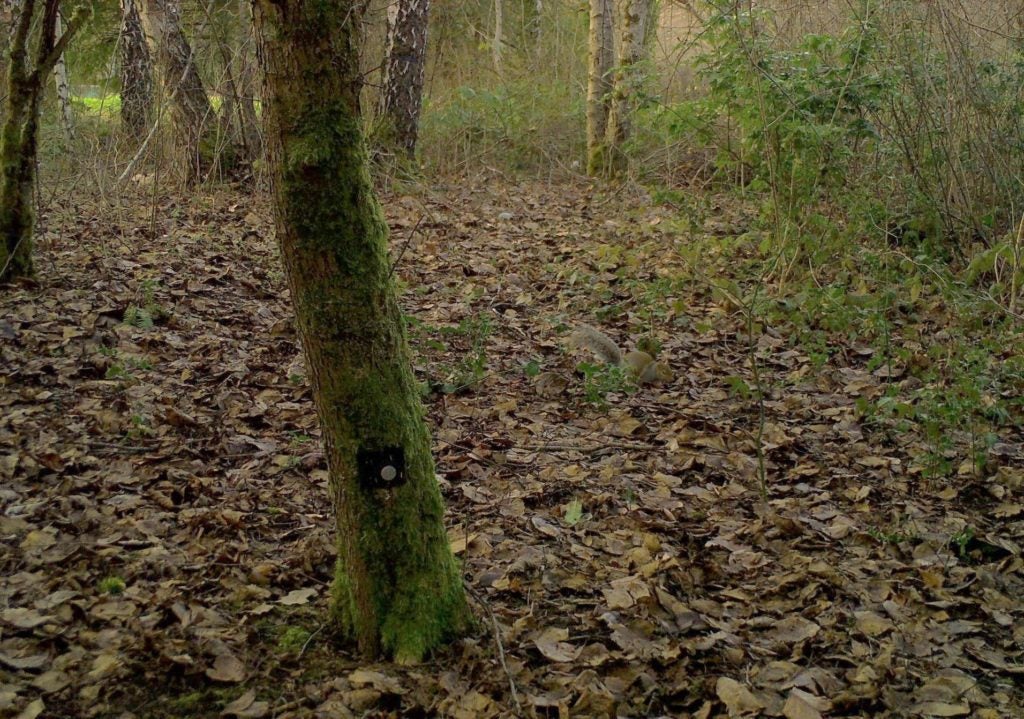 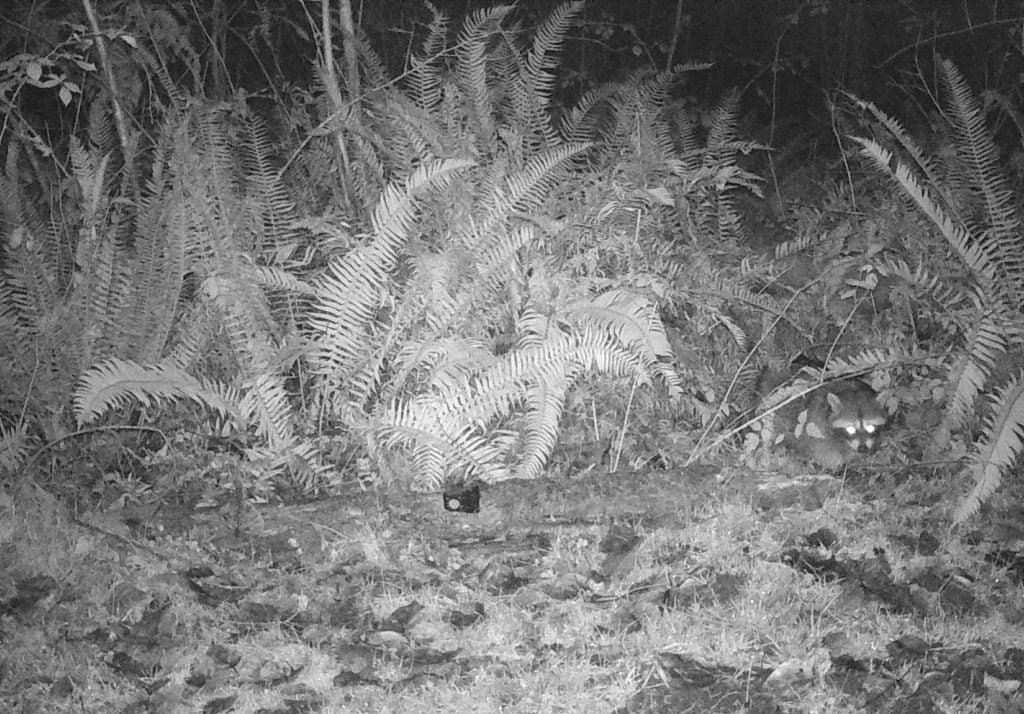