Southern three-banded armadillos Vespa and Scooter welcomed a female pup into the world in late October, making them both first-time parents. The pup is the first healthy armadillo pup born at Point Defiance Zoo & Aquarium in its 116-year history.

“She is healthy and the perfect little replica of her parents,” said the zoo’s head veterinarian Dr. Karen Wolf. 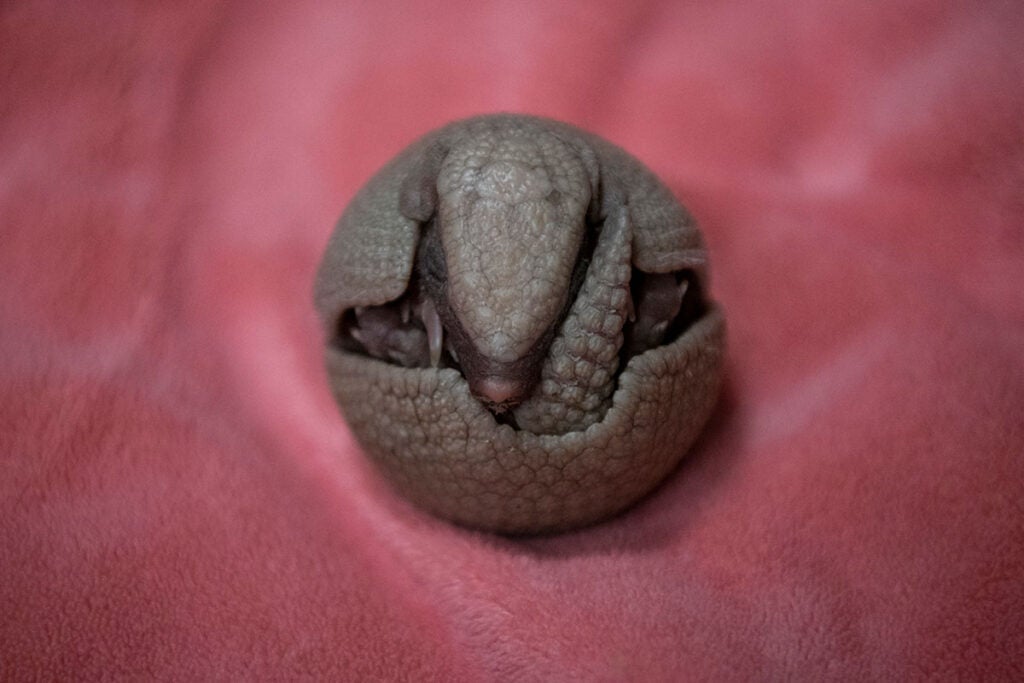 Keepers monitored mom Vespa’s behavior around the clock leading up to the birth.

“Vespa was trained to allow us to give her voluntary ultrasounds throughout her pregnancy,” said O’Keefe. “She’d even let us feel her belly without curling up in a ball, allowing us to give her the care she needed.”

For two days following the birth, keepers observed mom and pup 24/7 to ensure the pup was getting necessary nourishment from Vespa.

“Vespa is a natural at parenting and caring for her pup,” said O’Keefe.

The 2-week-old pup is beginning to open her eyes and will remain behind-the-scenes in the Wild Wonders Outdoor Theater area of the zoo while she nurses and bonds with her mother. Mother and pup will be viewable by zoo guests during Close Encounters once the pup is old enough.

The pup’s birth is the result of a breeding recommendation for Scooter and Vespa by the Association of Zoos & Aquariums’ Species Survival Plan® (SSP) for Southern three-banded armadillos. The SSP looks at the genetic makeup of each prospective parent before recommending a pairing; this helps ensure diversity of armadillos in North American zoos.

Southern three-banded armadillos are native to the southern interior of South America. They are listed as Near Threatened by the International Union for Conservation of Nature. Primary threats include habitat destruction as native grasslands are converted to farms and hunting and capture for the pet trade.

Some fun facts about three-banded armadillos: they have poor eyesight but a great sense of smell and are efficient burrowers. To eat, they collect ants and termites on their long, sticky tongues. Their shells are made of keratin, which is the same material as human fingernails.  Southern three-banded armadillos are one of only two types of armadillo that can roll completely into a ball for protection.