Even pouring rain couldn’t dampen the excitement of a Zoo field trip.

“We’re going to see an aquarium!!” called one boy.

“There might be spiders!” said another, in tones of true awe.

It was field trip day to Point Defiance Zoo & Aquarium for around 280 Tacoma Public Schools (TPS) student who had signed up through Beyond the Bell. A new partner program, it offers after-school and no-school-day enrichment for elementary and middle school students.

And so on November 11 – a school holiday for Veterans Day – several hundred extremely happy elementary students were skipping down the walkways to the Zoo entrance, picking up a brown-bag breakfast and reusable water bottle, and assembling on the curved seats of the Wild Wonders Outdoor Theater. Their chaperones (Metro Parks and TPS staff, plus dedicated parent volunteers) had accompanied the buses from each of the Metro Parks community centers and were now passing out rain ponchos to anyone who needed one. 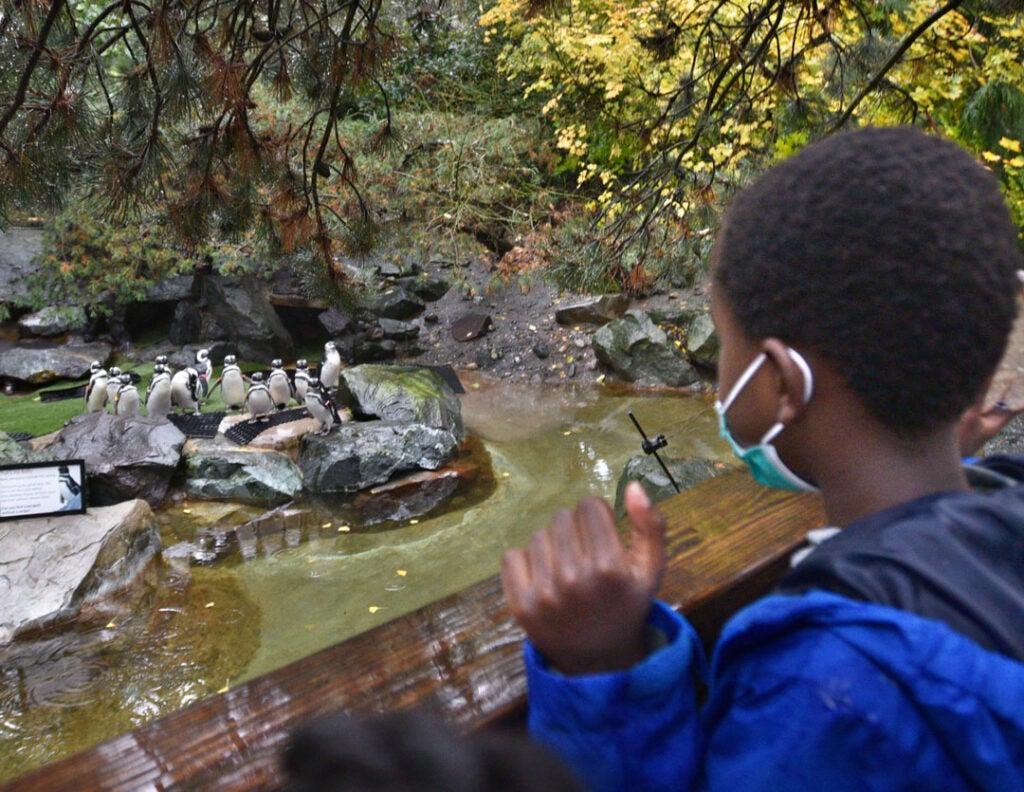 As the deafening roar quieted, Smiley led her charges through a warm-up song (helping offset the dismal fall weather) and went over the three simple rules: Stay with your leader, have fun and be kind. With co-leader Brendan Arends acting the part of a tiger, Smiley got the crowd cheering and booing for the right (and wrong) way to be kind to animals. Then she scooped up her own group of ten (the “Sea Stars”, with pink wristbands) and headed up to the classroom for some animal crafts.

Of the ten Sea Stars, coming mostly from Arlington and Manitou elementary schools, only three had ever been to a zoo before.

“I want to see an eagle!” added Aaliyah seriously.

“Ooh, look, I found a ticket,” said Jackson, spotting a discarded stub on the ground and staring at the pink-and-blue-striped fish printed on it. “What’s that animal? Will we see it?” 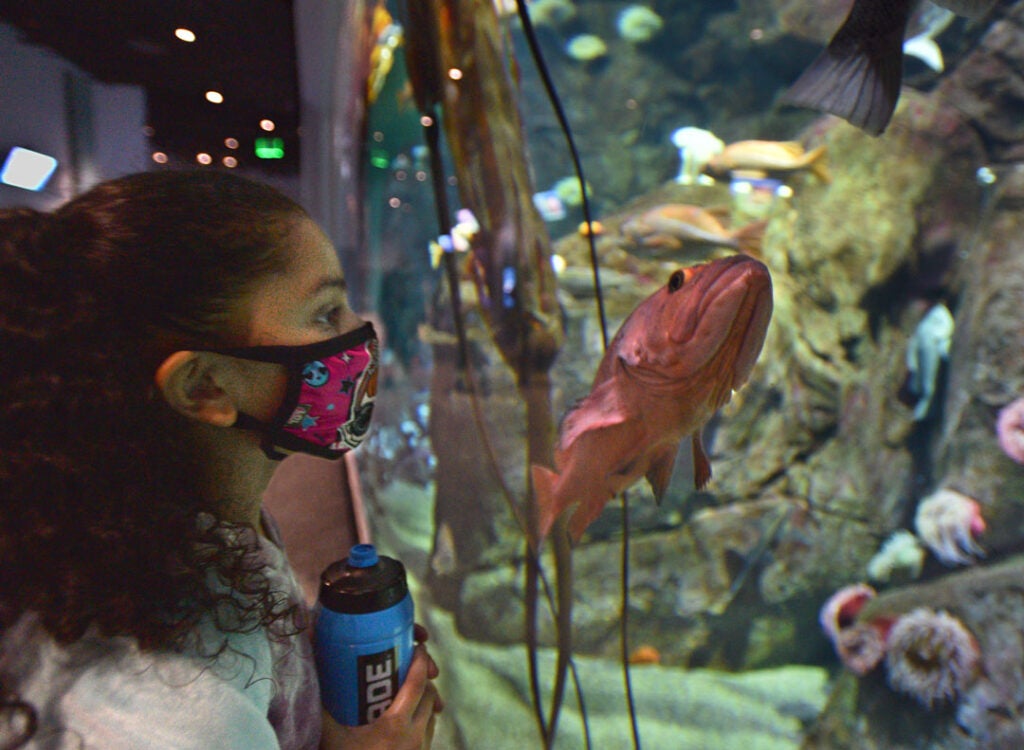 As the Sea Stars peeled off wet coats and began cutting out animal-print eye masks, Kenneth Baines’ group was inside the South Pacific Aquarium, staring in awe as aquarist Cindy tossed food into the swirling, vibrant mass of tropical fish.

“Give her some room,” asked Baines, one of Beyond the Bell’s site leads, double-checking his group count.

Then it was shark time.

“Woah!!!” exclaimed every student, faces glued to the glass, as massive sharks glided serenely by in the deep blue water.

“This is my very first time seeing a shark!” cried one boy, jumping up and down.

“When will we see the hammerhead sharks?” asked another. “They’re my favorite. They have long heads that work like scanners when they’re looking for food.”

Back in the education classroom, Smiley’s Sea Stars had finished their masks and had transformed into wolves, tigers, owls and snakes for a group photo. Oliver, a tall 5th-grader, was helping Chance attach the pipe-cleaners to tie his tiger mask on.

“He did kindergarten online during the pandemic, so now he needs some help,” Oliver explained seriously.

“When I see the tiger, he’ll think I’m a baby tiger!” said Chance, growling to prove his point.

Then everyone packed away the masks and headed back out into the rain to the Pacific Seas Aquarium. Wonder after wonder appeared at each turn of the blue corridor.

“Ooh, jellyfish! Are they dead?”

“No, they’re alive,” Smiley replied, “they just don’t have a brain.”

“Ohhhhh!” came the cry from the jelly globe, spilling over and glowing green, pink and purple. “Real water!”

And there was Jackson, crouched before the Kelp Forest habitat, eye to eye with Buddy the California sheephead fish – just as stunning as he looked on the Zoo ticket stub. 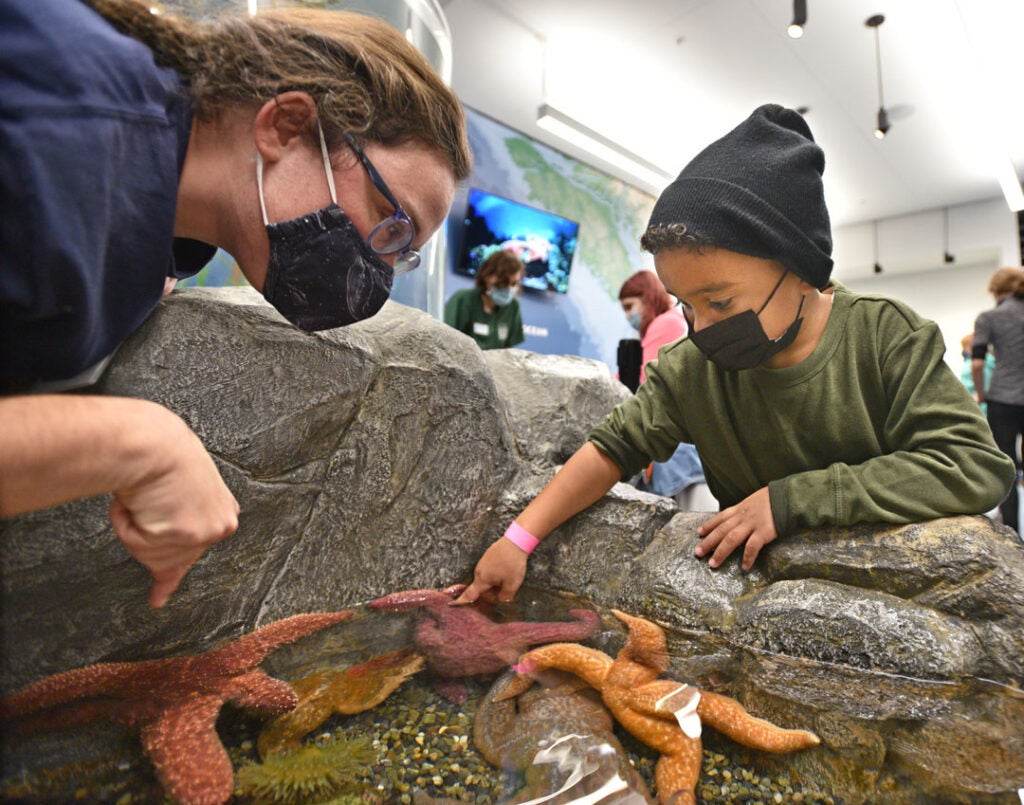 The Sea Stars met and touched real sea stars at the Tidal Touch Zone, with many discoveries made: “It’s soft, but kind of hard too.” “Spiky!” “They’re kind of sticky.” “They hug you with their spines!”

Even Roniya, who’d been terrified of touching an animal, discovered her courage and reached one gentle finger to a pink sea star.

“This really enhances their whole experience with the wild,” explained Smiley, returning Roniya’s high-five of triumph. “They can literally touch animals for the first time, and they’ve learned so much already in just 15 minutes in the aquarium. But they’re also learning things like kindness and using their imagination, which is so important in Beyond the Bell.”

Finally, the group met the enormous hammerhead sharks, green sea turtles and spotted eagle rays cruising overhead in Baja Bay, and after some fun with the selfie photo wall it was time for lunch back at the Wild Wonders Outdoor Theater.

Supplying nutritious food is a key part of Beyond the Bell, and in between munching all 280 kids stared, laughed, cheered and gasped in admiration as Jasper the lynx, Walnut the beaver, Twiggy the seriema and Ruby the hornbill showed off their natural behaviors onstage.

And when Tahoma the bald eagle made her appearance on keeper Sara’s arm, glancing regally around her audience, Aaliyah’s eyes grew wide.

After lunch came penguins, a bathroom break, tigers, sea lions, otters and muskox, before loading wet, tired and happy children onto the buses back to the community centers.

Beyond the Bell (and its middle-school sibling, Club Beyond) launched in fall 2021 with a roster of supporting community partners. Logistics, registration and providers are coordinated jointly by Tacoma Public Schools (TPS), Greentrike OSTI (Out-of-School Time Intermediary) and Metro Parks Tacoma. Other agencies manage each school site, including the Boys & Girls Club, YMCA, Communities in Schools and School’s Out, plus Metro Parks itself. The program is pay-what-you-choose through 2021.

“This is such a big thing we can offer to kids and families,” summed up Julian McGilvery, Beyond the Bell’s whole-child supervisor, who spent the day as a roaming chaperone between groups. “With this field trip, we give working parents a way to keep supporting their families on a no-school day. And we give kids an experience of nature that will open up their curiosity and enrich their lives. That’s what Beyond the Bell is all about.”

LEARN MORE: Session 3 of Beyond the Bell/Club Beyond opens for registration in December. Click here for information on Metro Parks Tacoma after-school programs and future field trips. 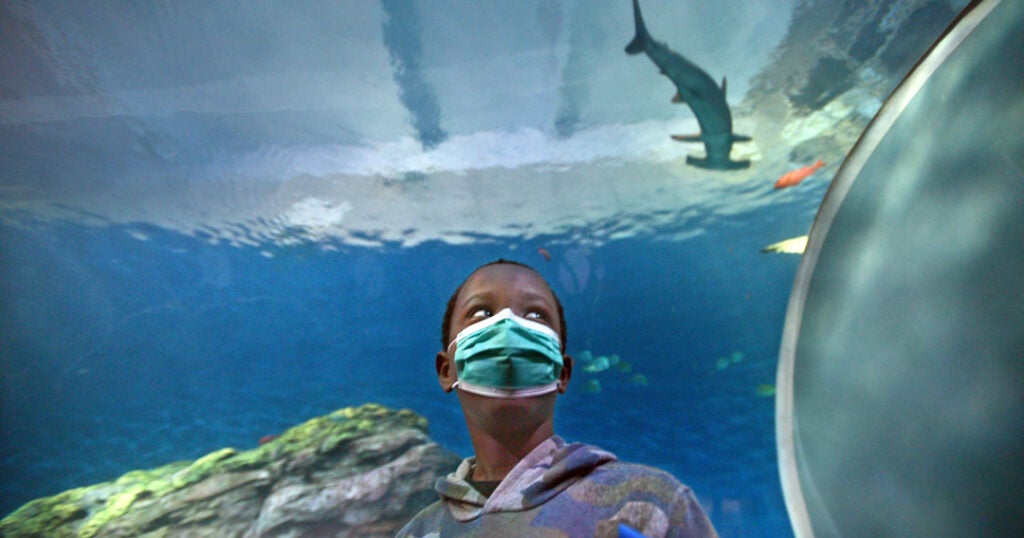