“I love Tippy and Tippy loves me.”

Liam and his mom, Bev Parnell, have been visiting the Zoo for over a decade. Liam’s love affair with sharks began when he first started walking.

“He’d walk right up to the aquarium window and have his hands and face pressed up against it,” says Bev. “It was an early attraction to him. Some kids do soccer or ballet, Liam does sharks.”

Liam spent his 8th birthday at the Zoo so he could do an Eye-to-Eye Shark Dive with his two best friends.

That dive was the first of many for Liam, who is the record-holder for the most Eye-to-Eye Shark Dives, with 11 dives total. More than 21,500 people have enjoyed the immersive program, but none more than Liam.

“I feel so special to hold the record,” says Liam. “You don’t have to be rich to have rich experiences like this.”

On Liam’s first-ever dive, he was nervous something would go wrong, but in the end, “it was outstanding.”

“I’m the type of person who likes to know things ahead of time, step by step, and the dive instructors were really good at that,” says Liam.

Liam struggles with some sensory issues and being underwater puts him at ease.

“When he’s underwater, it’s a silent world,” says Bev. “That sense of peacefulness in the water is so calming and reassuring for him.”

If Liam could live underwater, he would. 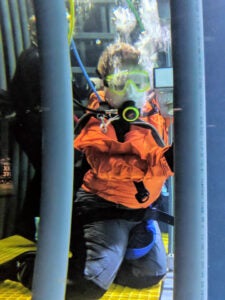 “If I’m having a rough day, it puts me in a lighter mood to see those majestic creatures,” adds Liam.

His favorite dive? The one with his dad, uncle and cousin. But now, Liam makes it his mission to bring a new person with him each time he dives. So far, he’s taken 10 new people with him.

“One of my friends was only 50 percent comfortable about sharks but after the dive she was 100 percent,” exclaims Liam. “And now she’s spreading the word to her friends, too, about how cool sharks are.”

Liam is passionate about helping sharks in the wild too. For his 13th birthday he wants to do a big presentation at his mom’s workplace about why he loves sharks and how others can help them.

“Mommy says my ripples spread very far,” says Liam about his work with shark conservation and as an ocean advocate.

Bev compares him to Disney character Moana, “the sea just called to him.”

It’s no surprise that Liam says he wants to be an aquarist in the South Pacific Aquarium when he grows up. And maybe someday he will get to work with his old friend, Tippy.

“They have such a strong connection with one another,” says Bev.

After all, they have grown up together, both with the same mission: to teach others about how wonderful sharks really are.

We will continue to offer our popular Eye-to-Eye shark dives through Sunday, Nov. 14 of this year. We’ll pause our dive program while the South Pacific Aquarium is closed and resume it when we reopen the building in 2023. The restoration project includes the installation of a new human-shark barrier that will be better for both sharks and humans. To read more about restoring the South Pacific Aquarium, click here.

Previous Article
Next Article
labels:
You Might Also Like
Celebrating 21K+ Eye-to-Eye Shark Dives
More than 21,500 people have come eye-to-eye with the sharks at Point Defiance Zoo & Aquarium in an underwater cage to see nurse, sandbar, blacktip reef, sand tiger and zebra … Continued
Learn More
Get eye-to-eye with sharks
“Welcome, please read our safety protocols before entering the building.” Sound familiar? It’s a phrase you hear often these days, at doctor’s appointments, hair salons, gyms and yes, even at … Continued
Learn More
See All Articles