More than 21,500 people have come eye-to-eye with the sharks at Point Defiance Zoo & Aquarium in an underwater cage to see nurse, sandbar, blacktip reef, sand tiger and zebra sharks cruise by. Divers from 8 to 90-years-old have learned about what it takes to help sharks in the wild. We asked two of the Zoo’s dive instructors, Heidi and Jessie, about some of their favorite memories with the Eye-to-Eye Dive Program since it first opened in 2013.

Heidi began working at the Zoo a few months before the program launched.

“My favorite part about each dive is seeing the participants’ nervousness before the dive turn into an absolute love for sharks,” said Heidi.

On one occasion, a 9-year-old girl who was gifted a dive for Christmas told Heidi she didn’t want to do it.

“After diving, she came up to me and said, ‘I’m too young to have a best thing I’ve ever done in my life, but if I had to pick, this would be it!’” Jessie looks back on a similar experience.

“A 10-year-old boy was terrified and crying before he got in the water, and we patiently worked with him at his own pace,” explained Jessie. “By the time he got out, he turned to me and said he wanted to grow up to be a marine biologist and study sharks!”

Heidi also remembers a grandmother who did the dive five times, once with each set of grandchildren.

Heidi said the dives aren’t just exciting, but they were life-changing for many people. She recalls a young man who was diagnosed with a degenerative medical condition, who told her that diving was the most free he’d felt since becoming ill.

“Or there’s the time a soldier told me it was the first time in 15 years that he felt at peace and wasn’t in physical or mental pain,” said Heidi.

More than 200 soldiers from Joint Base Lewis-McChord’s Soldier Recovery Unit (formerly known as Warrior Transition Battalion) have gone underwater with the sharks over the years. 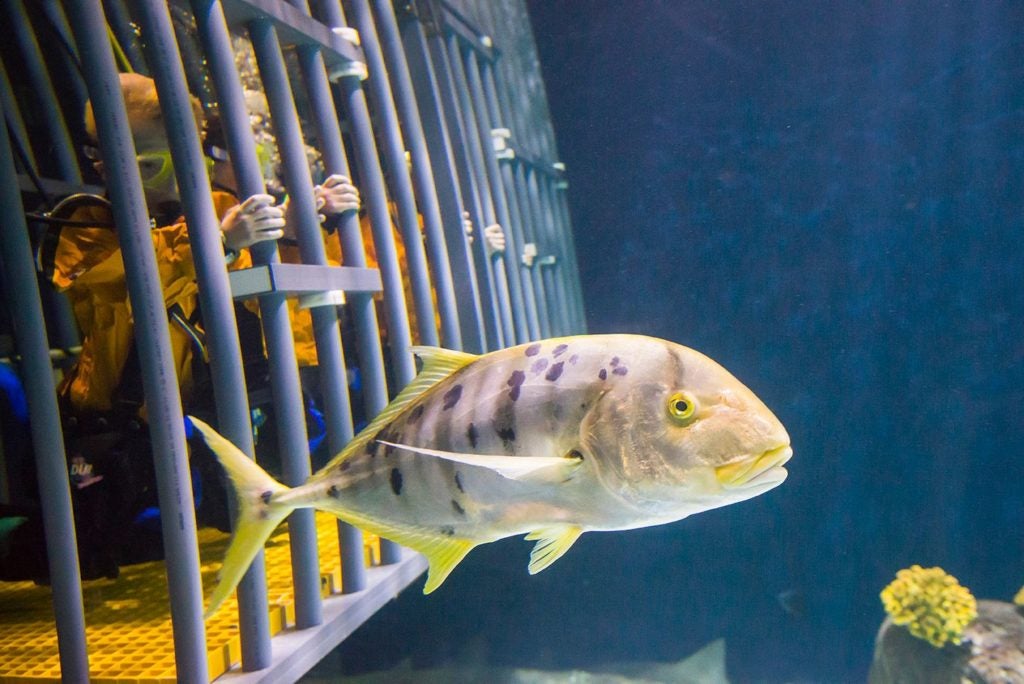 As the COVID-19 pandemic hit and students switched to virtual-learning, many parents turned to shark dives to provide immersive educational experiences for their children.

“We’ve seen a large number of parents make this part of their child’s curriculum,” said Jessie.

Jessie and Heidi both agree that it’s been incredible watching thousands of people sign a pledge at the end of their dive to take personal action to help sharks in the wild, like supporting sustainable fishing.

Sharks are beautiful animals that have roamed our oceans since before the time of dinosaurs. But every year, millions of sharks fall victim to the horrific practice of finning.

In one survey, 85% of participants said they regularly spoke with their friends and family about sharks and conservation, 65% said they avoided the purchase of shark products and 60% said they use the Seafood Watch program to make sustainable seafood consumer choices.

“Sharks are magnificent and it means the world to us every time someone dives and learns a little bit more about them, and then takes that knowledge and puts it into action,” said Heidi.

We will continue to offer our popular Eye-to-Eye shark dives through Sunday, Nov. 14 of this year. We’ll pause our dive program while the South Pacific Aquarium is closed and resume it when we reopen the building in 2023. The restoration project includes the installation of a new human-shark barrier that will be better for both sharks and humans. To read more about restoring the South Pacific Aquarium, click here.