Moving into a new home is an exciting moment in anybody’s life. But for Dwight and Jim, penguin chicks at Point Defiance Zoo & Aquarium, it became a enriching expedition of discovery as the two newly-fledged youngsters walked across the zoo from their behind-the-scenes home into the main Penguin Point colony – with a keeper escort, of course.

The day had begun like any other: fish for breakfast, wing-stretching, a little brotherly grooming.

But then, at 9:15am, staff biologists Amanda Shaffer and Stephanie Rager came in, picked up the chicks, carried them out to the main path in the Rocky Shores habitat and gently set them down.

And the expedition set off. 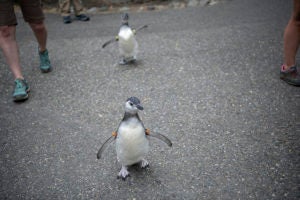 Dwight, with orange/black ID armbands, and Jim, with yellow/white, hatched this May and were raised by their parents in the zoo’s main Penguin Point exhibit. But since the pool is deep, zoo chicks leave at around 6 weeks old to live behind the scenes until they lose their downy feathers, learning to swim safely in a shallower pool.

Now, it was time to join the main colony – and since Dwight and Jim are strong young lads, keepers decided to let them walk as far as they were able.

Accompanied by half a dozen keepers, the chicks – now the size of fully-grown birds but with gray and white plumage – started down the path in an eager waddle. Past the sea lion pool, past the walruses, they navigated turns and corners with ease, looking all around them as if fascinated and occasionally bumping into one another in a slightly klutzy way.

At the top of the winding path out of Rocky Shores, Shaffer scooped up Dwight while staff biologist Cindy Roberts picked up Jim, and the cavalcade headed into the Pacific Seas Aquarium.

Once at the Baja Bay exhibit, keepers set down the penguins near the big curving window. An eagle ray swooped by, curious. Dwight and Jim ignored him, turned around and headed up the corridor, much more interested by the new space.

“Penguins coming through,” called Shaffer, as they rounded the corner into Tidal Touch Zone.

As the passed the jellyfish, Shaffer and Roberts lifted the chicks up to Jelly Globe, where moon jellies floated in an ever-changing stream of color – extra visual enrichment.

Outside, Dwight and Jim really got into stride, marching up the final stretch past the Wild Wonders Outdoor Theater.

As they got closer to Penguin Point, keepers began making honking penguin sounds. There was an answer from the adult birds, then another. Dwight and Jim picked up the pace, heads intently forward.

Finally, they were there. Shaffer and Roberts carried them through the gate, setting them gently down on the rocks before walking around to observe.

At first – total silence. Dwight looked around uncertainly. Gryff, a penguin with pink armbands, began nosing Jim with his beak. Then they all headed for the water, and after one dove in, Dwight followed in one sleek move.

Behind him, Jim shuffled to the edge and wobbled in sideways, paddling head-up.

Soon all the colony were darting around the pool like schooling fish – and then the initiation began. Gryff starting pecking again, and a couple of others joined in. Dwight swam faster, whizzing around the corner. Others were chasing Jim.

“This is all normal,” said Shaffer, watching calmly. “They’ll pick at the chicks a bit, and the chicks will learn to stick up for themselves. After a day or so they’ll all settle into their roles.”

Penguins are highly social birds, living in enormous colonies on seashore rocks to nest and breed but spending most of their lives hunting at sea. The zoo birds are Magellanic penguins, who range along the southern coast of South America. In the wild, chicks would all fledge together, swimming as a group. The zoo’s penguins have a social structure also, now with three generations of chicks from 2017, 2018 and 2019.

After about 15 minutes, the pecking stopped and most of the birds began preening on the rocks. Dwight and Jim, though, kept swimming around, exploring tiny “caves” and craning necks left and right to scope out the new scene.

They’ll keep their juvenile plumage – their gray-white distinct from the adults’ black-and-white bands – until they molt this time next year.

And for a little while, they’ll keep that endearing, toddler-like klutziness.

“They’ll look a bit clumsy while they figure everything out,” explained Shaffer, “but they’re doing just fine already.”

SEE THEM: You can spot Dwight and Jim every day at Penguin Point, just uphill from the Wild Wonders Outdoor Theater. Dwight has orange/black bands, while Jim has yellow/white. Both have gray and white feathers.