Even internet celebrities need their mom and dad sometimes.

Butternut, the beaver kit born in April at Point Defiance Zoo & Aquarium, will make her public debut at 2 p.m. Aug. 10 & 11 – but she’ll have mom Nutmeg and dad Walnut out there to keep her company as she meets her adoring fans.

Just days after her birth, baby Butternut became an internet sensation. Videos of her exploring behind the scenes (beavers are born highly mobile), clambering over the weighing scale at her first exam or just snuggling with mom and dad went viral on Facebook and Instagram, and were picked up by Buzzfeed and other media. Fans couldn’t get enough of Butternut as the cute, furry kit grew bigger, started nibbling her veggies and learned how to swim in a tiny practice pool.

“Come on, Butternut,” coaxed Adrienne Umpstead, staff biologist at the zoo’s Wild Wonders Outdoor Theater, where the beaver family have lived behind the scenes since Butternut’s birth. 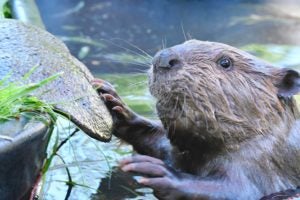 Umpstead crouched by two large travel crates used to transport the beavers up to the grassy Discovery Hut Close Encounter area at the zoo, and gently waved a leafy beech branch. Walnut was already munching on his own branch a few feet away, and Nutmeg had dived into the area’s small pool.

Butternut, though, was a little shy. As a handful of keepers watched the trio early one morning before the zoo opened, the kit gradually emerged to nibble the leaves. Slowly, encouraged by Nutmeg, she inched her way out and slipped into the pool with a splash. Only her eyes were visible as she sidled up next to her mom. Gradually, though, as keepers offered treats like corn cobs, Butternut grew more confident, popping her head out of the water to check out the scene.

Nearly three months old, the kit has been growing well – she now weighs in at 10 pounds. Her favorite foods include walnuts, pecans, cauliflower, corn on the cob, willow and beech branches, and other leafy greens, said senior staff biologist Maureen O’Keefe.

“She’s been getting more independent, and has started sleeping in her own area occasionally, away from her parents,” says O’Keefe.

Dad Walnut is also getting a little less protective, letting Butternut swim as long as she likes.

The family first came together in August 2018, when Nutmeg arrived at Point Defiance Zoo from sister zoo Northwest Trek Wildlife Park as a companion for Walnut. The pair are ambassador animals in the Wild Wonders Outdoor Theater, and Walnut is frequently featured in the live animal show.

Beavers are native to North America, and are nature’s engineers, using their phenomenal chewing powers to alter their environment and build lodges (indoor dens) and dams. They’re also very social animals, with family units living together in lodges, where kits learn swimming and other skills.

MEET HER: See Butternut, Nutmeg and Walnut at 2pm Saturday and Sunday Aug. 10 & 11 in the Close Encounter area near the Discovery Hut.