It took three staff members, six adult volunteers, three youth Zoo Guides and four classes of high schoolers to shovel sand for polar bears – but it was worth it.

On a late spring day, Boris and Blizzard, the polar bears at Point Defiance Zoo & Aquarium, shifted to their inside dens for the day to let a human work crew renovate their backyard habitat. A bucket-brigade shoveled out an island full of gravel, then shoveled a truckload (12 yards) of sand back in to replace it.

The result? A far more interesting and comfortable place for our elderly polar bears to walk around in.

The science of caring

“When the polar bear exhibit was built in 1981, it was state-of-the-art for what we knew about caring for polar bears back then,” explains Malia Somerville, curator of marine birds and mammals at Point Defiance Zoo. “Since then, we’ve learned a lot more – like how polar bears need a variety of natural substrate in their environment. They can choose what to walk on, and it’s healthier for their feet and joints, especially as they age.”

Boris and Blizzard are both geriatric bears: Boris is the elder statesman at 33, way beyond the median life expectancy of 21. Blizzard is also older, at 25, and both are showing typical signs of age, like arthritis.

The bears spend most of their outside time either in the pool or on the three land “islands” in their habitat, often soaking up the sun. When they were built, the islands (which are semi-hollow) were filled with gravel. Swapping out one of those for a softer sand mix was a good way to improve the bears’ daily lives – but since the habitat isn’t accessible by vehicle, that took a lot of planning and human-power.

Everyone pitch in – and shovel out 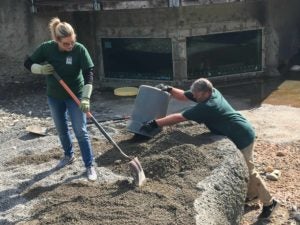 Armed with shovels, the volunteers, staff and students from Tacoma Public Schools’ Science and Math Institute (which shares a campus with the zoo) began digging up the gravel from one island and shifting it in buckets to another. Then the bucket brigade worked in reverse, filling the empty island with veterinarian-approved sand.

“It was hard work, but telling Zoo guests why it was us inside rather than the polar bears was kind of fun!” says Bela Dolan, one of the teen Zoo Guide volunteers who helped that day. “And when we were finished, we got to be just feet away from Boris and Blizzard in their inside bedrooms. It was so worth it to become closer to these bears and help them.”

After the work was done and the humans had left, Boris and Blizzard were let out to explore their new terrain.

“They’ve been digging in it, rolling around in it,” says Somerville. “It’s probably a little cooler to lie in, on summer days. It’s really enriching for them, as well as being better for their feet and joints.”

“Sand is messier for keepers to clean than gravel, but it’s definitely worth it,” she says.

And for the humans who shoveled it in, it’s also worth it.

“It’s great to know I made an impact on our zoo and helped care for animals,” summed up Dolan. 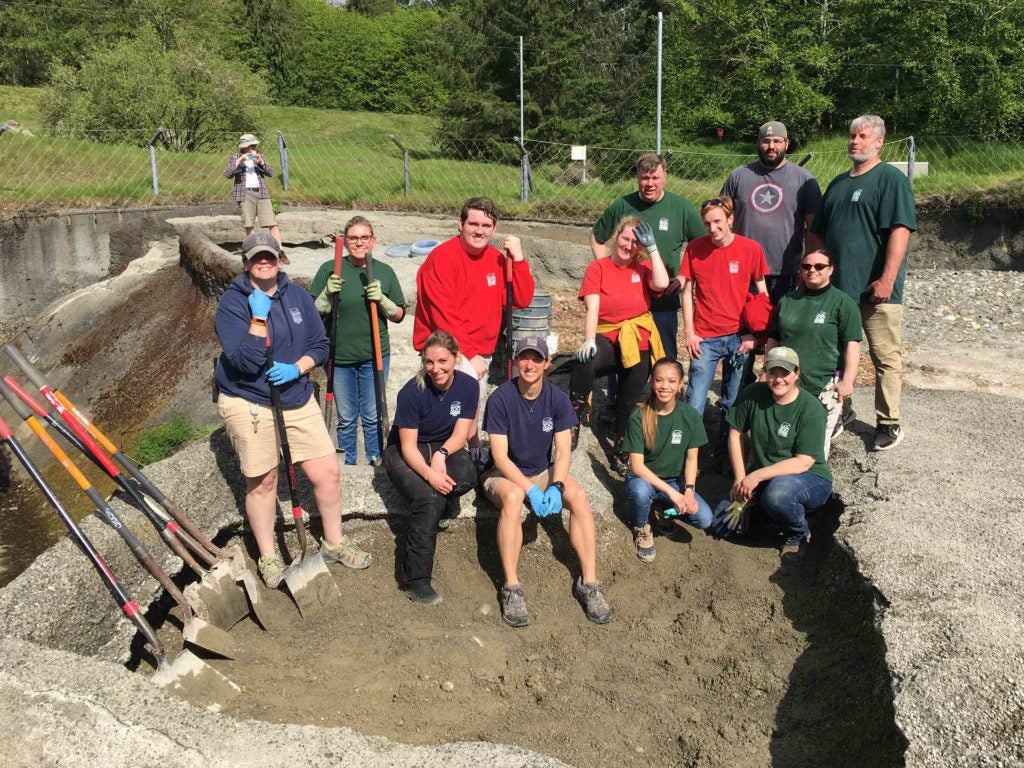 Previous Article
Next Article
labels:
You Might Also Like
Zoo provides home to orphaned opossum joeys
The zoo is currently home to three 3-month-old baby opossums, known as a joeys. Two of the joeys will soon be moved to other zoos accredited by the Association of … Continued
Learn More
Eagle Ray Pup Born at Point Defiance Zoo & Aquarium
Birth marks major milestone for zoos and aquariums worldwide A spotted eagle ray pup is flourishing off-exhibit at Point Defiance Zoo & Aquarium. Born in April, the male pup marks … Continued
Learn More
Testing New Tracking Technology
By Emily Ringer, Senior Manager of Communications and Advocacy, Polar Bears International Last week, a tech challenge to invent a better way to track polar bears moved out of the … Continued
Learn More
Cho Cho: Fifty-two and fabulous
For most of us, a wellness exam at 52 is all about middle-age health issues. For Cho Cho, it’s an impressive tribute to a senior siamang and the Point Defiance … Continued
Learn More
Healing with Light
On a cold, wet November morning, veterinary technician Julie Lemon is lying on her stomach on a hard floor. Angling her head, she carefully positions a small metal wand between … Continued
Learn More
See All Articles