For most of us, a wellness exam at 52 is all about middle-age health issues.

For Cho Cho, it’s an impressive tribute to a senior siamang and the Point Defiance Zoo & Aquarium staff who care for him – because at 52, Cho Cho is believed to be the oldest siamang in human care in the United States. And he’s in great shape, say the veterinarians who just gave him his three-year wellness exam.

“Overall, given his age, he looks amazing – he’s older than I am!” said Dr. Karen Wolf, the zoo’s head veterinarian. “His body condition is good, with good muscle tone and only a small amount of arthritis. He has some corneal changes and dental disease, but that’s normal with age and isn’t affecting his daily life too much. We’re really pleased.”

“Ryan, has he been having any apparent vision problems when he’s moving around?” asks Wolf, peering into the black eyes and noticing some change on their surface.

“Not that I’ve noticed,” replies Clifton.

Reed also checks over the eyes – a fully-trained vet, she’s doing her zoo internship to get deep experience with a wide variety of species – and carefully flushes them with a yellow staining agent. Dimming the lights, she examines the eyes with a green light: no stain uptake, therefore no infection.

“These observed changes are not unexpected, given his age,” Reed explains to Clifton. “Just watch him as he’s reaching for branches, make sure his hands are going where he wants them.”

Clifton nods. He and the other keepers in the Asian Forest Sanctuary have already modified Cho Cho’s living spaces to better suit an elderly primate, adding extra hand-holds, ropes and ramps. 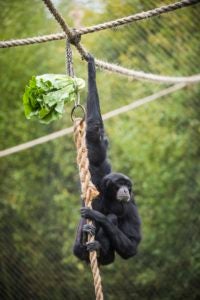 Next, Wolf listens to heart and lungs (both healthy) while Reed inserts an IV catheter. Cho Cho’s ears look good too, and then it’s time for his dental check-up.

The median life expectancy for siamangs is 27 years* – which makes Cho Cho a super-senior. As usually happens with extreme old age, his teeth aren’t quite what they were.

“Mmm, these really need to come out,” says Wolf, pointing out two very loose teeth. Seven remain. “The others are okay. Is he eating well?”

“Oh yes,” says Clifton, who along with the team cuts up Cho Cho’s fruit and veggies extremely fine with a mandolin (cooking would lose too many nutrients) and adding vitamins and omega-3.

“Definitely give him a smoothie later today, with extra protein,” advises Wolf. “He’ll like that, after getting these teeth out.”

“Really good range of motion,” she pronounces. “A little arthritis in this knee, but surprisingly little. Less than some humans would have at this age!”

Lemon preps for a blood sample, then all the team works together like a well-oiled machine to position the elderly siamang for x-rays. An ultrasound fills out the picture in 3D, showing healthy bones and internal organs.

“We love looking after Cho Cho,” Clifton says. “He’s definitely the old guy – to him we must seem like young whippersnappers. He’s really smart and knows everything that goes on.”

Like humans, siamangs do better with companionship, and Cho Cho is lucky to have Dudlee, his long-term partner. She’s younger and, like all female siamangs, the dominant one.

“Anything Dudlee wants, she gets!” says Clifton.

Wolf carefully extracts the two teeth while Clifton trims nails. Lemon and Reed give Cho Cho his vaccines and check on his blood pressure.

Finally the whole keeper team is called in, masks in place, to take a look at the x-rays. It’s a special time for keepers to get a rare close look at the animal they care for every day.

“We couldn’t ask for a better result,” Wolf sums up. “There’s no reason to think he won’t make it to his next exam in a few years’ time, when he’ll be the oldest siamang on record, ever. That’s just amazing.”

Reed gives Cho Cho the drug to reverse his anesthesia, and the whole team gently lifts him into his wake-up crate. A warming machine blows in heated air. As Reed kneels and softly touches his face to stimulate him, Clifton finds a recording of Dudlee’s distinctive hooting calls on his phone and plays it nearby to wake up the old siamang.

After a little while, Cho Cho coughs and opens his eyes.

Everyone smiles down at the sleepy siamang.

FIND HIM: Cho Cho and Dudlee live in the Asian Forest Sanctuary. Meet their keepers at 12:30pm every day at the Keeper Chat.

*According to statistics compiled by the Association of Zoos & Aquariums.

Previous Article
Next Article
labels:
You Might Also Like
Zoo provides home to orphaned opossum joeys
The zoo is currently home to three 3-month-old baby opossums, known as a joeys. Two of the joeys will soon be moved to other zoos accredited by the Association of … Continued
Learn More
Eagle Ray Pup Born at Point Defiance Zoo & Aquarium
Birth marks major milestone for zoos and aquariums worldwide A spotted eagle ray pup is flourishing off-exhibit at Point Defiance Zoo & Aquarium. Born in April, the male pup marks … Continued
Learn More
Testing New Tracking Technology
By Emily Ringer, Senior Manager of Communications and Advocacy, Polar Bears International Last week, a tech challenge to invent a better way to track polar bears moved out of the … Continued
Learn More
Getting Sandy for Polar Bears
It took three staff members, six adult volunteers, three youth Zoo Guides and four classes of high schoolers to shovel sand for polar bears – but it was worth it. … Continued
Learn More
Healing with Light
On a cold, wet November morning, veterinary technician Julie Lemon is lying on her stomach on a hard floor. Angling her head, she carefully positions a small metal wand between … Continued
Learn More
See All Articles