Missing travel? While the coronavirus pandemic has made global vacations more dream than reality, Puget Sound-area folks have an option right on their doorstep: Point Defiance Zoo & Aquarium, where you can surround yourself with plants and animals from around the Pacific Rim. Tigers in lush Asian bamboo, South American rainforest reptiles, Australian amphibians and North America habitats from spiky desert to icy waters – and that’s not even counting the ocean. Come visit four continents in one day – no passport required. 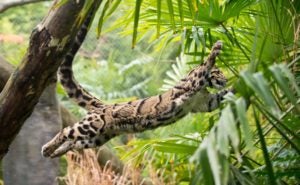 Start your journey in the Asian Forest Sanctuary, where Suki the Asian elephant lives just across from our clouded leopards. They’re elusive to spot in the canopy, just as they would be in the wild. Wander down past deep green windmill and jelly palms to the main Asia habitats. The biggest, with waterfall and pool, is set in architecture reminiscent of South Asian temples, with curling stone vines. That’s where you’re likely to find one of the Zoo’s Sumatran tigers, orange stripes glistening in the sun.

This continent will take you all around the zoo, but starts right after Asia in the Discovery Hut (next to Budgies). Titan our rhinoceros iguana and Roxie our green iguana share a heated indoor space, their scaly reptilian skin blending perfectly with branches.

Keep wandering to find the colony of Magellanic penguins, plunging and diving as they would on the far south coast of South America.

On the path near the penguins find the Chilean monkey puzzle tree, with bizarre spiky branches.

Just uphill, nestled into a landscaping bed, you can spot one of the Andes’ famed tabaquillo trees, which live thousands of years in fairy-tale forests. And also from Chile is the azara bush, with tiny leaves that smell like vanilla.

Want more rainforest creatures? You might just meet Siesta our sloth, Gonzo or Terra our Southern tamanduas or Nigel the coendou – they all live at the Wild Wonders Outdoor Theater and venture out with keepers if the weather is warm enough.

The path then winds north into colder waters with playful sea otters, plunging sea lions, harbor seals and puffins on their rocky cliffs.

On you go into the Arctic Tundra, where shaggy muskoxen graze wavy grasses, an Arctic fox slips into her den and Blizzard the polar bear dives into a cold pool.

Finishing the North American journey are the red wolves, an iconic native species saved from extinction, and here surrounded by plants from their Eastern woods: crape myrtle, hibiscus and carnivorous pitcher plants.

Climb the hill to Kids’ Zone and travel Down Under! White’s and Magnificent tree frogs nestle into branches in their jewel tanks, iridescent green. Along the paths are spiky red bottlebrush, rare Wollemi pine and tea tree from Australia, and red flax and wire netting bush from New Zealand.

Did you miss the South Pacific Aquarium? Here you can bask in the warmth of a tropical lagoon with brilliantly colored fish, gliding stingrays and an Outer Reef full of majestic Pacific sharks.

Who needs a plane ticket? Just come to the Zoo.