When animals are endangered, they often make headlines: koalas, elephants, rhinos. But there are hundreds of endangered species that animals depend on every day for food, shelter, clean air, water or the right temperature – plants. Humans also depend on plants for survival. But when they’re endangered, do we think about it?

Bryon Jones does. The horticulturalist at Point Defiance Zoo & Aquarium makes a point of cultivating rare and endangered plants from around the world in the zoo’s lush botanical landscape. And on January 2 he’ll lead a tour of them, telling stories about fire-rescued pines, stolen succulents and crowded-out carnivores.

“When plants disappear from ecosystems all life can be affected, from the smallest insect to the largest mammal,” explains Jones. “That includes us. Plants are facing more pressures than ever before: changing climates, sprawling development, invasive non-natives, even plant poaching. By sharing these stories I hope people will understand why it’s so important to be aware and take action to protect and preserve plants – and to celebrate them, too.”

Here are six of those stories.

Wollemi Pine – Saved From the Fires 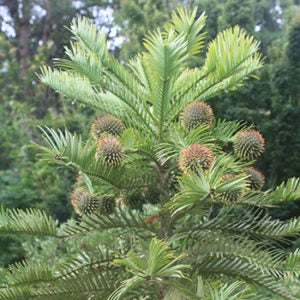 It’s not often a tree makes international headlines, but that was the case on January 15 this year after Australian firefighters succeeded in a top-secret mission to save 200 wild Wollemi pines from the deadliest bushfires in their country’s history. The trees needed saving, because they are the last remaining wild stand of this dinosaur-era species long thought to be extinct, and only recently rediscovered in a remote section of the Wollemi National Park west of Sydney.

Why a top-secret rescue? Because location of these critically endangered pines, a member of the Araucariadeae family with light green needles and bizarre cone balls, is only known to a handful of Australian scientists to keep the trees safe for the future. Some have been cultivated, however, and Point Defiance Zoo has five of those.

“It’s pretty rare to find them around here,” says Jones. “And ours are apparently some of the largest in the area.”

FIND THEM: One tree is off the path to the right of Kids’ Zone; two others are in the Wild World Wonders bed sloping down to the Wild Wonders Outdoor Theater; one is between Penguin Point and Wild Wonders and another in the Asian Forest Sanctuary. 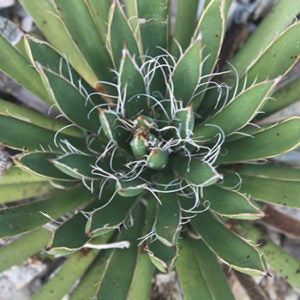 The smallflower century plant doesn’t actually live for 100 years – just 10-15 before flowering and dying, like all agaves. But this little agave just six inches across is only found in semi-desert woodlands and grasslands in southeastern Arizona and northern Mexico.

And here’s where things get complicated for endangered plants. The State of Arizona lists it as Highly Safeguarded. The U.S. Forest Service has designated it a Sensitive Species. It isn’t on the IUCN Red List, CITES or other international endangered listings – yet it only lives in this small area, and is considered endangered in the wild.

Luckily, we have many at the zoo, dotted around the Kids’ Zone desert bed and easily spotted by the white curly hairs all over its rosette leaves.

FIND THEM: In the Desert Bed as you enter Kids’ Zone.

Cacti – Too Hot to Handle 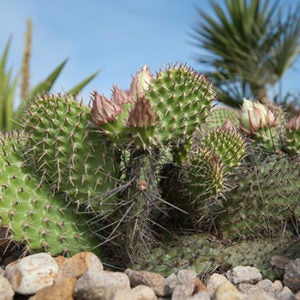 When you think desert, you think cacti. It’s hard to imagine whole populations being wiped out. Yet that is exactly what has been happening recently around the world.

“A curator at the Desert Botanical Garden in Arizona tells me he has seen entire dense populations of cacti species wiped out over the years due to the changing climate,” says Jones.“Tough as they are, they are also vulnerable.”

They’re also vulnerable to a directly human threat: poaching. Cacti hit headlines in 2019 thanks to “hipster tastes” fueling large-scale poaching from public lands. In Saguaro National Park, the solution of microchipping individual cactus trunks proved effective. But not all species are that lucky. Others are simply losing habitat due to land development, a threat for many plants around the world.

The result? One third of all cactus species are threatened, and the group as a whole is on the CITES (the Convention on International Trade in Endangered Species). Here at the Zoo ours are safe, and carefully chosen by Jones as species that can thrive in the cold, wet Northwest to tell the story of their wild Southern cousins.

FIND THEM: In the Desert Garden at Kids’ Zone and the Baja Garden outside the Pacific Seas Aquarium. 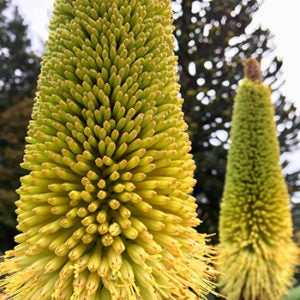 In the world of poker plants, Cameron McMaster is a famous man. The South African horticulturalist was inspired in the 1990s to find a pollinator for his rare species of poker plant: Kniphofia bruceae, with a rich, creamy-yellow flower atop the signature towering poker plant stem. Only three herbarium specimens existed at the time. Eventually, McMaster tracked down a wild cluster of over a hundred of them on a hillside.

“It is difficult to describe the feeling of being amongst such impressive and rare plants,” said McMaster in the journal Veld & Flora.

Thirty years on, Kniphofia bruceae is still rare in the wild – but we have several plants at the Zoo, which flower in late fall and are surrounded by giant deep green leaves around three to four feet long.

FIND THEM: In the Southern Borders and Kids’ Zone beds.

Sarracenia – Carnivorous, Collected and Crowded Out 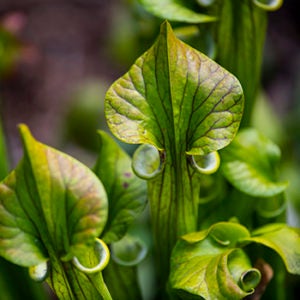 Don’t know the genus Sarracenia? Then maybe you’ve heard of carnivorous pitcher plants. With their tall, innocuous green stems that open, pitcher-like, to lure unsuspecting insect dinners, Sarracenia are native to North America, especially the south-east. That’s why Jones has planted around a dozen species in our Red Wolf Woods area along with other plants from the native region of these endangered animals.

But that’s not the only reason.

“Unfortunately, many species of Sarracenia are threatened or endangered in the wild due to loss of habitat,” explains Jones. “Pitcher plants like to live in the places we also like to build homes or farms – near water. Humans have filled in those wetlands, interfered with the fire ecology the plants need to thrive, and built over much of their habitat.”

The other threat is over-collection – carnivorous plants are just too popular, it seems. The entire genus is listed in CITES (the Convention on International Trade in Endangered Species).

FIND THEM: Spot ours in a little clearing on the downhill side of the Red Wolf Woods path. 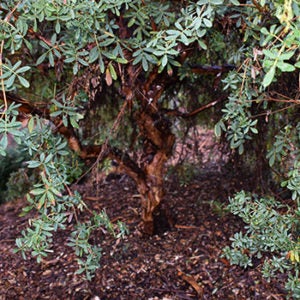 Ancient, twisting branches. Peeling bark like a witch’s skin. Misty forests high in the clouds. This is the world of the tabaquillo or queñoa tree, scientifically known as Polylepis australis (“many-layered tree from the south”). Found only in the Andes Mountains, high up in the clouds at around 16,400 feet, these trees and shrubs are among the slowest-growing in the world. They take over 100 years to grow half an inch, layering themselves to protect against their cold, wet world. Some are thousands of years old.

Visually, these trees weave magic. Their peeling trunks, twisting branches and ethereal leaves combine with mosses and ferns to create a fairy-tale world that made it onto the popular indie tourist site Atlas Obscura. They are the only home in the world for the critically endangered Royal Cinclodes bird, among many other animals.

But they’re also one of the most endangered forests in the world, cut down by humans for livestock grazing, firewood and building materials. Many of the remaining trees are protected by national and private reserves in Ecuador.

FIND THEM: In the Wild World Wonders bed just downhill from the central lawn.

TAKE THE TOUR: The Vanishing Flora tour begins at 10am Sunday Feb. 2 from the central plaza. Tours are free with admission.

LEARN MORE: Find all plants endangered in the U.S. on this state-by-state listing.