PUPDATE! – Red wolf pups are exploring outside, on view to the public.  Meet them here.

And suddenly, there are eight.

What appeared at first to be a litter of four rare red wolf pups on Friday afternoon became a squirming mass of eight, yes, count them, EIGHT!, healthy newborns over the weekend. Red wolf mom Charlotte whelped the pups during about a 12-hour period between Friday afternoon and early Saturday morning.
This is the second litter of the critically endangered species born at Point Defiance Zoo & Aquarium over the last seven years.

Zookeepers monitored the young family over the weekend via cameras placed in their den before they went on public exhibit.

Monday morning, Senior Staff Biologist Jenn Donovan and Staff Biologist Jarek Sarnacki briefly checked on the pups, carefully weighing each one, taking documentary photos, and checking to see how many males and females there were.

Sadly, they also discovered a ninth pup that did not survive, an occurrence that’s not unusual in large litters, said Land Animal Curator Natalie Davis.

Zookeepers’ preliminary assessment was that there are three males and five females. 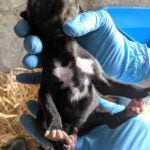 Veterinarians will give the dark brown pups a more thorough hands-on exam later this week.

Their weights range from about 11 ounces to 13 ounces. By comparison, a can of Pepsi clocks in at 12 ounces; a “sharing size” package of M&Ms weighs 10.7 ounces.

“They have no idea how important they are,” Donovan said. “These pups are the future of their critically endangered species.  “But for now, they’re just busy being adorable.”

The gloved zookeepers gingerly picked up each pup, weighed it, photographed it and then put it in the tote so they didn’t wiggle away. Some members of the litter have differently sized white blazes on their chests, markings that may help their keepers tell them apart as they grow.

Their “weigh station” was ingenious. To keep the pups from wriggling off the scale, they put each one in a bucket, then subtracted the weight of the container.

While the pups were examined, zookeepers enticed Charlotte out of the den with a meal of tasty, calorie-laden meatballs, nutrition she needs to keep up her strength for nursing all that softly whimpering, wriggling mass of new life. Dad Hyde stood close by.

He hasn’t been introduced to the pups.

“He looks in the doorway of the den, and then she gives a low growl to say, ‘Not yet,’ and he walks away,” said Staff Biologist Steven Ok. Eventually, Charlotte will allow dad to get closer to his offspring, Davis said.

It likely will be at least a month before the pups venture out of the den on their own. They will be sleeping and nursing and growing under Charlotte’s watchful care. Conveniently, she has eight nipples, one for each pup.

Zoo staff members plan to come up with two slates of prospective names for the pups within the next week. The zoo will announce those and create a naming survey so guests and social media fans can weigh in on their favorite name choices.

The names will be announced around the time the pups are expected to be mobile enough to venture out of the den and into their yard.

The births represent another success in an effort established at Point Defiance Zoo in 1973 to save the extremely fragile species from extinction. They are one of the most endangered species of wolf on the planet.

By the 1970s, a scant 14 red wolves were all that remained of the once populous species. In 1980, the U.S. Fish and Wildlife Service declared the red wolf biologically extinct in the wild.

They are threatened by a number of environmental and human factors. And it’s a scant number, considering that hundreds of wolves once lived in a wide swath across the Southeastern United States.

Red wolves were first reintroduced to the wild three decades ago. The breeding and recovery program is a cooperative effort among 42 U.S. zoos and wildlife centers and the Fish & Wildlife Service. There are approximately 261 adults and juveniles at the cooperating facilities, including 35 pups born so far during this breeding season.

Metro Parks Tacoma’s extensive and unwavering dedication to bringing this iconic American species back from the brink of extinction has been lauded by partners, peers and wildlife conservationists as extraordinary. Since the program’s inception, about one third of pup births have occurred at Metro Parks facilities. Metro Parks staff currently cares for about one quarter of the program’s population.