The annual Washington Sea Otter Survey has been on hold for the past couple years due to the pandemic, so Maggie, Noelle and Zach were excited to meet Jessie, a postdoctoral fellow with the National Marine Sanctuary Foundation and wild sea otter expert who has been volunteering on the survey since 2013.

The team was assigned to survey the Split and Willoughby site from the Quinault Reservation, which is known to have a sizable number of sea otters in recent years. It is the most southern location of the coast’s six land survey sites surveyed this year.

Armed with their research permit, binoculars and scopes (and some snacks and extra layers), the team parked on the Reservation and began their hike to the survey site. Jessie later explained that this was one of the most challenging survey sites to reach as the team had to hike off trail and climb over and under moss-covered logs. Eventually, the team members reached a clearing near the cliff’s edge where the Split and Willoughby rocks were jutting out of the sea in the distance.

On first glance, no sea otters were visible.

The team set up their scopes in the brush, safely staying far from the edge. Jessie advised the team to first locate the sea otters through their binoculars and then direct the scope for a closer look.

“There they are,” Jessie said after just a few seconds of scanning.

The rest of the team soon got the hang of locating the “raft” (a group of sea otters) in the binoculars and scopes. The raft is typically made up of females and their pups. 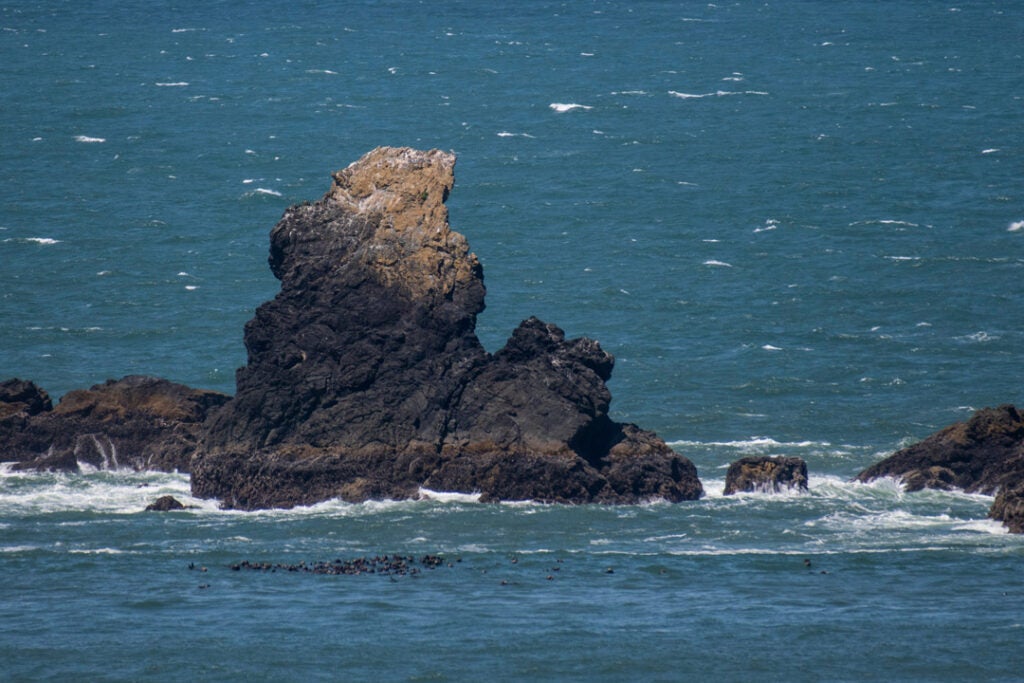 “Wow,” the team seemed to say in unison as the raft came into view.

Then the daunting task set in – they’d have to count all those tiny specks, with waves making it even more of a challenge.

Hunted from the beginning of the fur trade in 1792, the adorable furry mammals (which spanned the Pacific from northern Japan and Russia to Alaska and California) became extinct in Washington in 1910. They were reintroduced in 1969-70 with just 59 animals, and in 1989 the Washington Department of Fish and Wildlife and U.S. Fish and Wildlife Service began aerial and ground surveys to track their population growth.

“The flight is delayed an hour,” Jessie piped in. “They’re socked-in further up the coast.”

It was now a waiting game. Although it wasn’t the most comfortable waiting spot, it was beautiful. The team spotted large sea lions napping on the base of smaller rocks near Split and Willoughby, as well as porpoises, surf scoters, a bald eagle and even a gray whale.

At long last, they heard the plane before they could see it. The team assumed their positions: Jessie, the primary counter, called out if there were small or large pups or adults, Noelle documented the otters’ locations, and Maggie and Zach identified any outliers from the main rafts, typically the males who hang out nearby.

The plane began to circle Split and Willoughby and the counting began. After some circling, the plane was off to its next survey site to the north.

This year’s survey was a little different than in past years in that they only did one count simultaneously with the plane, and then the plane did an extra pass further offshore to determine if more otters were living out there.

Washington’s population of sea otters has grown steadily to nearly 2,800 animals in 2019. Official counts from this year’s survey will be available later this year once biologists at the Washington Department of Fish and Wildlife and U.S. Fish and Wildlife Service compile the counts from all of the ground sites and aerial surveys. In Washington, sea otters live in marine waters from south of Destruction Island north to Cape Flattery and east to Pillar Point in the Strait of Juan de Fuca.

Sea otters are vital to healthy oceans. By chomping on urchins, they stop the spiky echinoderms from destroying kelp forests, which are essential habitats for many sea creatures and soak up much of the planet’s carbon dioxide.

Northern sea otters are protected from hunting and harassment by the federal Marine Mammal Protection Act and are listed as threatened under the Washington State Endangered Species Act. Their greatest threat is oil, which if spilled in their waterways can clog their dense fur. The otters then have no insulation against cold water and ingest the oil as they try to groom.

Moea, one of Point Defiance Zoo’s three sea otters, was rescued from an oil spill further down the coast.

PROTECT WILD OTTERS: You can help wild sea otters by reducing your car and yard pollution, choosing sustainable seafood and reducing your plastic use. Find out more on our otter page.

MEET OUR OTTERS: Meet Libby, Moea and Clara daily at Rocky Shores, and meet their keepers at the 12:30 p.m. marine mammal keeper chat.