With soft pale fur and sharp claws, Terra moseys up a log. She goes farther, her long tail wrapping for balance, sniffing and exploring until she’s way overhead. Then, without fuss, she makes her way back almost upside-down. 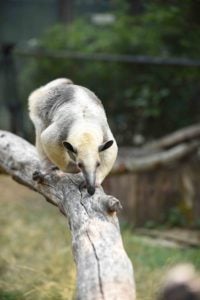 “She loves to climb,” says Jessie Sutherland, staff biologist at Wild Wonders Outdoor Theater, watching her new charge roam around the animal exercise area. “She even slides down poles and railings on her walks around the Zoo!”

Terra recently arrived at the Zoo to join Gonzo, a Southern tamandua who has lived at the Zoo for some years, appearing regularly in the Wild Wonders animal show. But Terra’s “more coordinated” than Gonzo, who’s “a bit goofy,” says Sutherland. Her ears and nose are also a little larger than Gonzo’s, and her fur a bit lighter.

“She also loves to tear stuff up,” Sutherland says with a smile. “And she’s definitely not shy.”

Eventually the Zoo plans to pair the two for breeding. 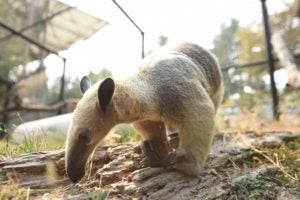 A type of anteater from South America, Southern tamanduas have a long, slender nose and a super-long tongue (16 inches!) that lets them scoop out termites and other insects. Gonzo shows off this ability in the Wild Wonders show by licking up vanilla yogurt out of a tube – a favorite treat.

Down in the exercise area, Terra’s devouring the snack of live wax worms Sutherland has brought her, then keeps climbing. At the end of the day, Sutherland says, she climbs high into her sleeping box and loves to pull a little blanket over herself.