UPDATE June 29: The chicks have moved behind-the-scenes to learn how to swim. Read the story for more!

There are the chill kind of parents, who just relax and enjoy their little one.

Then there are the intense kind of parents, super-protective and alert.

At Point Defiance Zoo & Aquarium, we’ve got one pair of each – at Penguin Point.

Two new Magellanic penguin chicks hatched at the zoo on May 22 and 23, and are healthy and growing well, says head veterinarian Dr. Karen Wolf.

But while parent pairs Red and Pink and Yellow and Orange (named after their colored identification armbands) are all third-time parents, they definitely have different parenting styles.

“Red and Pink are very involved, and defend their chick against potential threats like crows that fly too close,” explained assistant curator Amanda Shaffer, as she led Dr. Wolf into Penguin Point for the chicks’ twice-weekly check-up. “But Yellow and Orange are much more defensive. It’s interesting.”

Sure enough, as Shaffer gently reached into the rock burrow for the first chick, mom Pink and dad Red honked briefly but stood aside calmly as she lifted out the fluffy gray bird, already about eight inches high.

Fellow keeper Cindy Roberts placed the chick into a basket scale, where it craned its neck curiously over the edge.

“They’re obviously feeding really well,” smiled Dr. Wolf, pulling out a stethoscope and listening to the chick’s heart and lungs, before checking feet and mouth for anything unusual. “Everything’s looking good.”

The chicks’ genders aren’t yet known. In a week or two, when they start exploring the exhibit, keepers will take them behind the scenes to learn to swim in a safely shallow pool until their waterproof feathers grow in, and to bond with keepers. The veterinary team can determine the gender then via blood samples.

Shaffer set the chick back and moved to the next burrow, lifting out another fluffy chick as mom Yellow and dad Orange honked loudly in unison, crowding Shaffer’s feet. An attentive chorus of penguins assembled on top, watching every move.

“1,537 grams,” read Roberts, and held up the second chick, its long flippers waving.

“Heart good, feet fine, and I don’t hear any respiratory issues,” checked off Dr. Wolf. “It looks bright and alert.”

Back to mom and dad 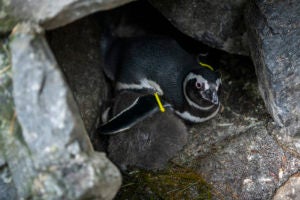 She set the chick gently back in the burrow. “Here’s your baby!”

Yellow instantly raised a flipper, honking, and the chick burrowed underneath, fluffy backside sticking out.

Magellanic penguins, native to the shores of Argentina, Chile, Uruguay and Brazil, are listed as near-threatened on the IUCN Red List. Their numbers are drastically dwindling in the wild, threatened by ocean plastics, oil spills and overfishing.

At Point Defiance Zoo, this is the fourth consecutive year for the hatching of penguin chicks through the Association of Zoos’ & Aquariums’ Species Survival Plan® (SSP) managed breeding program. The zoo colony currently has 15 Magellanic penguins. Pairs tend to mate for life.

As the care team made their way out of the enclosure, a cluster of curious penguins followed them. Among them were last year’s chicks Dwight and Jim, now fully grown but still without their adult black chest stripe. Shaffer picked up a couple in turn, stroking the sleek wet feathers and getting neck cuddles in return.

“They’re mostly very comfortable with us, because we give them as much positive interaction as we can,” she explained, as penguins nipped softly at her pant leg. “That helps us give them the best health care possible.”

Zoo guests can potentially spot the penguin chicks inside their burrows over the next week or two, after which they’ll go behind the scenes for swim training and keeper bonding. They’ll rejoin the colony after that. 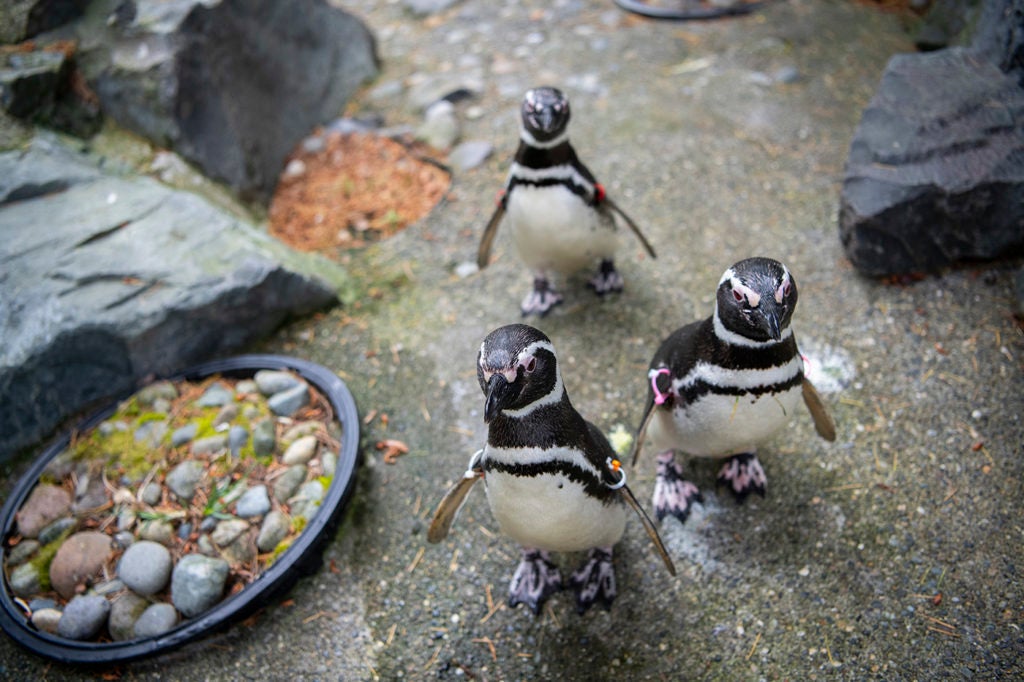