King Julien has nothing on Queen Tiffany.

On a sunny fall morning, the small black-and-white ruffed lemur is reclining on a grassy hummock in her Kids’ Zone habitat at Point Defiance Zoo & Aquarium, propped on one arm and looking like a very furry Roman emperor.

Or rather, empress. Because lemurs are matriarchal, and while King Julien might be the boss in the movie “Madagascar,” in real life it’s the ladies who run the show.

“Tiffany’s 26 years old, and she’s definitely the queen,” says staff biologist Jarek Sarnacki, who’s cared for the lemurs for over three years now. “She’s in charge, and she shows it by displacing the others or allowing them to dine with her.”

‘The others’ would be Albert and Saunders, two nine-year-old brothers who vie for Tiffany’s affections.

“Saunders is the laid-back one,” explains Sarnacki. “He just goes with the flow. But Albert, he’s excitable. Energetic. Unpredictable.”

This morning, he’s also being thoroughly rejected by Tiffany, who gives him a clear, growling “No” while making Saunders give her the prime sunning spot, all in one smooth move. Basking, she closes her eyes. A respectful distance away, Albert and Saunders begin affectionately grooming each other.

When people think lemurs, they tend – if they’ve seen any pop culture in the last decade – to think of the ring-tailed variety. Fifteen years ago now, King Julien burst onto screens as the campy, flirtatious monarch with a black-and-white striped tail, fancy headdresses and outrageous dance moves.

And there are, in fact, two ring-tailed lemurs at Point Defiance Zoo: longtime mates Bobbi and Freedom, who alternate with the ruffed lemurs in the outdoor habitat and live their own, much calmer, lives.

But look closely at the lemur scenes in “Madagascar” and you’ll note a huge variety of species: red-ruffed, black-and-white ruffed, crowned, blue-eyed black and brown lemurs, plus sifakas, Maurice the aye-aye and Mort the mouse lemur. In fact, there are over 100 lemur species on the real island of Madagascar: the world’s oldest living primate species and, sadly, one of the most endangered mammals on Earth. And they live nowhere else.

The threat is two-fold: loss of habitat (which ranges from rainforest to grasslands) and climate change, both caused by humans. And that’s where real lemur life goes way beyond the movie. In “Madagascar” there’s not a human to be seen (though plenty of animals that act like them.) On the real island, off the east coast of Africa, there are some 20 million people – but only 10 percent of the original forests.

And that’s not counting the millions of other people around the world who have (consciously or not) helped the species dwindle by buying items made of rosewood (an endangered Madagascan tree), or even supporting the lemur pet trade.

“We tell guests that the best ways they can help lemurs is to buy FSC-certified wood and Madagascar vanilla (a crop that helps support locals),” says Jenn Donovan, Kids’ Zone’s assistant curator. ”And never, ever think about a lemur as a pet.”

There’s another reason lemurs don’t make good pets. While Sarnacki likes caring for the lemurs (especially the social drama, which can rise to telenovela levels), he’s honest about one of the downsides: the poop.

In the wild, however, that’s a huge benefit to the rainforest where ruffed lemurs live, mostly up in the trees. As they go about their days eating fruit and pooping, they disperse seeds wrapped handily in their own fertilizer balls, essentially regrowing the rainforest. Nectar-lovers, they also pick up pollen on their fluffy fur, carrying it from plant to plant.

Another really important way humans can help lemurs is to minimize our carbon footprint. As the planet warms, the island and its wildlife are increasingly affected by extreme weather events like typhoons.

Inside Point Defiance Zoo, however, the climate is pretty comfortable. Even in the depth of winter, Tiffany and her suitors have indoor/outdoor access, plus several heaters tucked under perches and above hammocks. Adapted to forest shade, they’re more comfortable with cooler temperatures anyway and are more likely seen in colder weather than the ring-tailed lemurs, who are adapted for life in drier areas of the island. 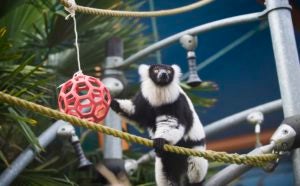 There are, however, many details about “Madagascar” that echo, if not mirror, real lemur life. Like all primates, lemurs have opposable thumbs and big toes, and so are quite dexterous.

“We keep them really busy with enrichment items to explore and manipulate,” says Sarnacki, who recently gave them a trio of pumpkins. They’re now covered with tooth-marks.

That’s in addition to their complex habitat full of swings, ropes, climbable fence and even the same kind of play structure as the human kids have nearby. They also love to eat, especially nectar from the torch lilies and palm fruit that grow in Kids Zone. Like the movie lemurs, real lemurs are extremely vocal: Tiffany, Albert and Saunders make low, raspy noises, while Bobbi and Freedom have a higher-pitched, rooster-like call.

“It gets pretty loud inside,” smiles Sarnacki. “But it’s interesting – they all have different personalities, and you never know what will happen each day.”

Meanwhile, Albert is cautiously trying, again, to approach Tiffany. She lifts a paw and he instantly changes direction.

The queen is definitely in charge. 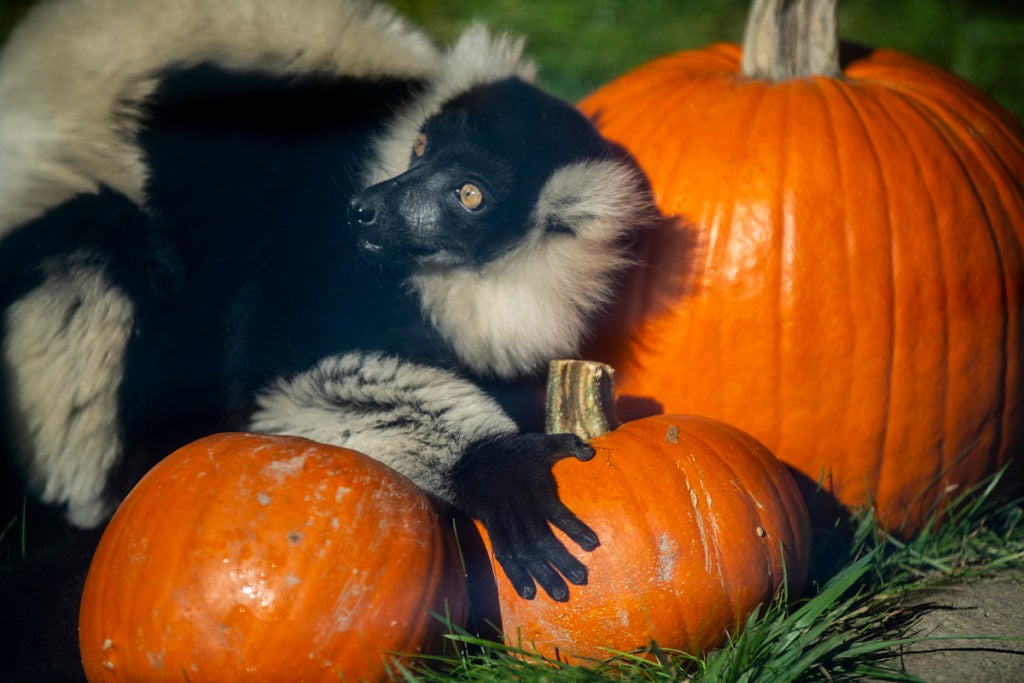