Keeper Stephanie’s day involves quite a lot of fish – and shrimp, and clam, and squid. When you care for ten marine mammals and four flocks of seabirds in nine different pools, you do a lot of feeding – and cleaning too. But for keepers like Stephanie at Point Defiance Zoo’s Rocky Shores habitat, creativity and psychology play a big part, too.

It’s a later start than her usual 8am (or 7am, if there’s food preparation to be done). But Stephanie has a long evening ahead of her cleaning the two big pools at Rocky Shores. Either way, her day starts with several hours of feeding and training – because with animals like sea lions, harbor seals and sea otters, that’s often the same thing.

“Okay, let’s go,” Stephanie says to fellow keeper Sheriden, and the two set off down the path to the outdoor fish fridge.

As soon as she sees them, sea lion Eloise starts excitedly diving round and round in the nearest pool, stopping occasionally to leap up and see if lunch is ready yet. Stephanie smiles at Eloise, picks up a bucket of herring and a red plastic heart shape and walks with Sheriden round to the next pool: sea lion Matia.

“Hi there!” she calls, approaching the young sea lion. “Door!”

She feeds Matia a couple of fish, then slides in through the gate, and feeds some more. Then it’s target time: Holding up the red heart, she has a fish ready when Matia touches it with her nose, along with a gentle blow on a whistle to reinforce the reward.

It’s all part of training animals, something keepers do all around the Zoo for enrichment, bonding, exercise or to help animals take part in their own health care. It often involves behaviors they’d naturally do in the wild – like moving a limb or getting in or out of water. And it’s always rewarded by a whistle, vocal cue and food reward – in this case, Matia’s daily diet.

Stephanie cues a few more behaviors: right flipper out, “walking” along, resting on a small platform.

“At first she didn’t know what to do with the platform – she’d touch it, or push it around, then she’d get scared,” explains Stephanie.

“It took a few months for her to sit still, but now she’s doing great!”

Stephanie finishes up – “All done!” – then pulls waterproof waders on over her long rubber boots. Eloise is splashing round again, ever-hopeful. Next door Boomer, a young male sea lion, is looking out, waiting his turn.

“Move up!” Eloise slides onto the deck, touches her white target, gets a whistle and a fish. Keen and alert, she moves left, does a circle, dives into the water and back up, eager to collaborate. Sheridan watches, a second pair of eyes in a team effort: some behaviors, like holding a flipper for a voluntary blood draw or x-ray, take two keepers to achieve.

“They didn’t know any of these behaviors when they first arrived,” Stephanie says. “And we’re constantly shifting how we train – like when our new sea lion Björn arrived, we put a sign up on his gate. Suddenly that was the most scary thing for Eloise, and we had to get her used to that so she would move between pools.”

Finally it’s Boomer’s turn for a training lunch. Then Stephanie and Sheriden put their heads together for a new way to help Björn – who’s a rescued animal, and blind – better understand his cues.

“We vocalize each cue and also make noises, but we think he’ll respond to targets with texture on them,” explains Stephanie. She digs out a big blue disc with bumps all over it. “How about this one?”

“Mmm,” agrees Sheridan, finding a white grooved disc, “and maybe this one too. We can hold them like this, to guard our hands.”

While both keepers have worked with blind animals before (a walrus, a seal), training a blind male sea lion – even one as gentle as Björn – does have its challenges: As Stephanie points out, he’s got very sharp teeth and a big mouth.

They let themselves into the back door of Björn’s pool, and instantly there’s a crowd of guests watching. Björn swims over too.

“Björn! Fish” Stephanie calls, nudging his nose to tell him where the herring is.

Then they try out the discs. Stephanie calls Björn to her blue disc, rewards him with fish when he noses it, then leads him to Sheriden’s disc for another reward.

They go back and forth, and then practice getting the sea lion onto the pool deck by hitting a wooden board to make an audio cue.

“Fish!” Throughout, Björn is calm, following the prompts as best he can, and the watching humans gaze in awe.

One more training session before lunch, and maybe the most challenging. Sekiu the sea otter recently had surgery, and while it was successful it definitely made her wary of getting into a crate. Stephanie wants to make that a good experience for her again.

The keepers head inside the massive walk-in freezer and scoop out shrimp, clam, squid and fish into small tubs. Inside the big food prep kitchen, they strap bungee cords around their waists, then hook the tubs on for easy access. Then they pick up a closed crate and head into the otter habitat, where Sekiu and Libby are rolling around in a delightful tangle and Moea’s across the pool.

Dividing and conquering, Sheriden calls Moea and distracts Libby with fish while Stephanie entices Sekiu over to her side. Standing next to the crate to get Sekiu comfortable with it, she takes the otter through some easy behaviors: twirling, up, forefeet on the guest window. Watching kids let out a cheer and Stephanie answers questions while deftly feeding fish and giving cues.

“She’s come a long way,” says Stephanie afterwards, putting the crate away. “Next time I’ll try it with the door open.”

But now, it’s keeper lunch time. Stephanie and Sheriden head back to the office, where an adorable penguin chick in a kiddie pool takes up most of the floor space. Delicate after hatching, he’s been hand-fed (now four times a day) and closely monitored by veterinary staff and keepers, and definitely seems to enjoy the attention.

“He likes keeping cool in here, and handling penguins when they’re young gets them used to us so we can give them health care when they’re adults,” explains Stephanie.

The chick looks up expectantly at her voice, all fluffy feathers and big eyes.

More feeding and training take up the rest of the afternoon: Rocky Shores keepers care for harbor seals, puffins, murres, penguins and Blizzard the polar bear, as well as the sea otters, sea lions and an Arctic fox. It’s a job that involves a lot of getting wet – cool in summer, cold in winter – and lots more fish. 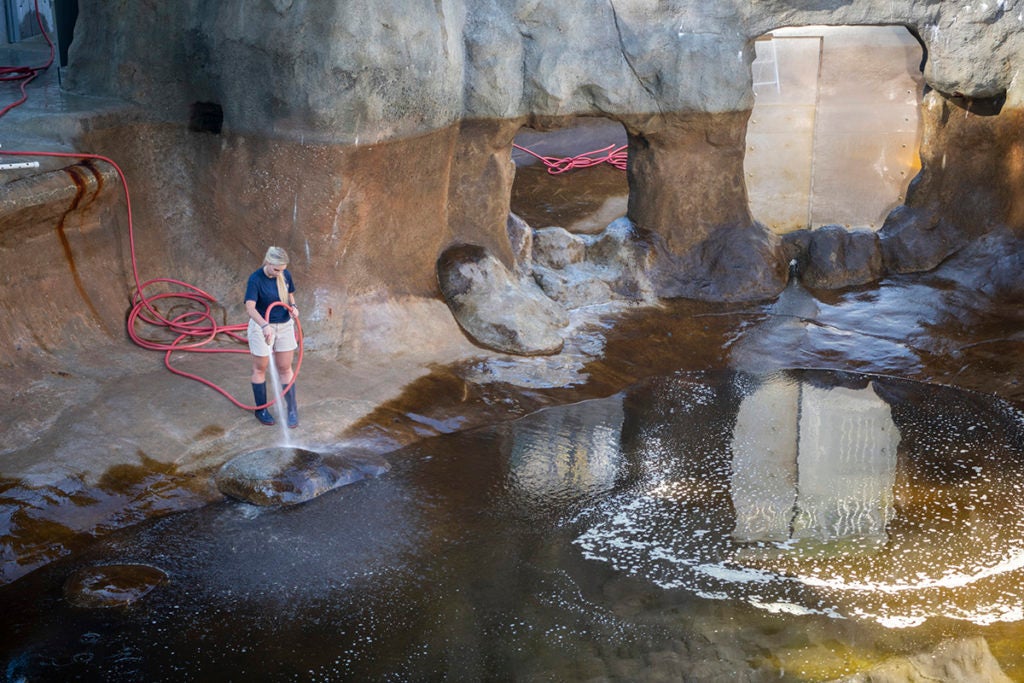 But the really messy part comes on pool cleaning days, which happen every week. After the Zoo closes to guests, Stephanie and her team will empty the big pools, rinse down the sides wearing protective gear, do a chlorine soak to disinfect, rinse again, then refill with saltwater.

“I don’t have a favorite part of being a zookeeper – I love it all,” says Stephanie. “Of course, it’s very rewarding when you figure out how to communicate with an animal and get a breakthrough in their understanding. But what I really love is when I can connect our guests to animals so they’re inspired to go out and help them, outside the Zoo. Knowing my work is having an impact on the world is incredible.” 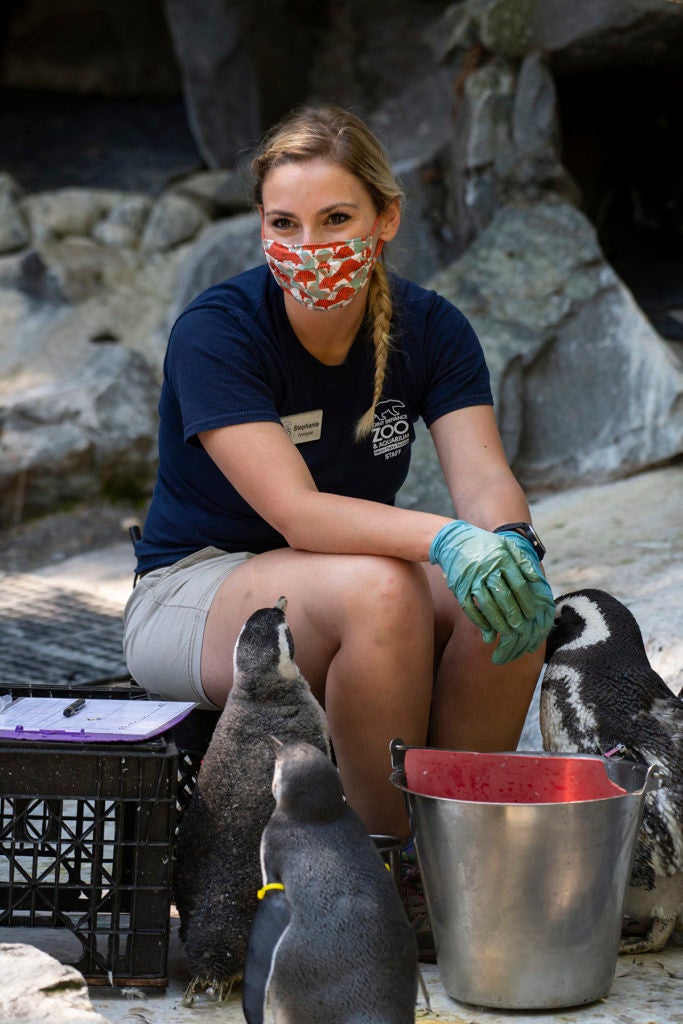