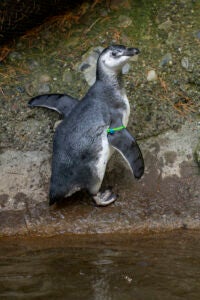 What’s the best way to take your first swim?

Well, if you’re a hand-reared penguin chick, you find a penguin buddy. On a hot day in August, penguin chick Rio had his first swim session in a behind-the-scenes pool at the Point Defiance Zoo & Aquarium – and his buddy was big sister penguin Maxine (Max for short).

“Come on, Rio!” called keepers, circled around the shallow training pool at the Rocky Shores habitat. “This way! You can do it!”

The scene wasn’t completely unusual. Every summer that penguin chicks hatch at the Zoo, they are watched closely for when they molt their soft, downy feathers and take an interest in water. In the wild, parents would keep them out of the water until they grew in their fully-waterproof plumage and were able to swim safely.

But at Point Defiance Zoo, keepers don’t leave anything to chance in the pool of Penguin Point, where the Magellanic penguin colony lives. When they’re able to leave their parents, chicks are taken behind the scenes in pairs or groups to try out swimming in a safe environment, with keepers watching closely and helping them get out if necessary.

But for Rio, things were different. The little chick was a singleton this year, hand-raised from hatching by veterinary staff and keepers due to frail health. (Named Rio because his parents had been rescued in that city in Brazil, he also sports armband ID tags in blue and green – two of the Brazilian flag colors.)

Now, robust and strong, with just a tiny tuft of fuzzy chick down left atop his head, Rio was ready to swim, and three-year-old Max was there for his first foray into the water.

“We chose Max because she’s a very friendly bird, used to keepers and calm with other penguins,” explains Malia Somerville, curator of marine mammals and birds.

And of course, Max was already an adept swimmer. So, after about a week of hanging out together, Max and Rio went for a swim. Max instantly dived in, skimming around the pool and surfacing to shake out her feathers with expert skill. She cast a glance over at Rio, who had paddled straight back to the edge and was heading toward the exit door.

“Come on, buddy,” Somerville said, and gently scooped up the chick for another try. A keeper walked beside him around the side of the pool, encouraging him as he paddled along.

Over the course of the next week, Rio and Max did many more pool sessions, monitored by encouraging keepers. Finally, Rio could swim easily and get out of the pool by himself – he was ready to rejoin the colony.

Ready for the Colony

On a sunny morning, keepers scooped up Max and Rio and carried them part of the way. Then, just outside the Pacific Seas Aquarium, the penguin buddies were set down to take a walk. Surrounded by a seven-keeper entourage – and watched by entranced guests – the two penguins waddled with surprising speed along the pathway.

“Look, there’s the baby penguin!” pointed out one mom. “He’s so cute!”

As the group arrived at Penguin Point, Max and Rio were again scooped up and carried inside. Gently, keepers set them down on the rocks.

In an instant Max had dived and was swooping around the pool with the other 13 adults. Rio hesitated a little, turning to the humans who’d raised him from a tiny chick.

“Go on!” the keepers encouraged.

Rio turned, waddled to the edge, looked over – then splashed in, paddling around the big pool with confidence. A few other penguins raced over to nudge him with their beaks, but for the most part he was left in peace to explore his wide new world, just like a kindergartner in their first day at school.

Keepers monitored for a while, but it was clear that Rio would be fine, and with just a few backward glances they left. Rio had rejoined his colony to live the penguin life.

SPOT RIO: As the only chick, Rio is easy to spot compared to the adult penguins, lacking their distinctive white cheek stripes. He has blue and green armbands (two of the Brazilian flag colors, in honor of his parents rescued from that country). He also has more black dots on his chest feathers (a unique penguin identifier) than almost any other penguin in the colony.