Just above floor level at the Red Wolf Woods habitat, a young girl crouches low. Open-mouthed in wonder, she slowly runs her fingers over the soft snout of a sleeping red wolf pup. But the pup doesn’t snap – or even stir. It’s “Just Settling In,” a near-life-size sculpture set deliberately within reach of curious young Zoo guests precisely so they (and adults) can explore – and empathize with – this beautiful, endangered American animal.

And a big part of the thrill is that the sculpture is set inside a wooden “den” door – just like the real one visible in the wolves’ space beyond, where real red wolf pups have been born to help save this population in the wild. 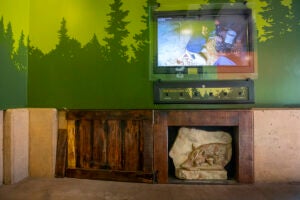 “Just Settling In” is a fiberglass cast of an original alabaster carving by sculptor Dale Weiler, on view at The Bradbury Art Museum at Arkansas State University. Donated by the artist’s conservation nonprofit Weiler Woods for Wildlife, the replica will be celebrated at an official unveiling Oct. 15-16 for national Wolf Awareness Week.

“I am thrilled to have this this beautiful piece of art on display for Zoo guests to see and touch,” says Natalie Davis, animal curator for Kids’ Zone, Red Wolves and Wild Wonders Outdoor Theater. “I hope it will motivate people to learn more about American red wolves, and how to help save this critically endangered species.”

By the 1970s, very few red wolves existed on the planet, due to ceaseless hunting. By the 1980s, Point Defiance Zoo, in cooperation with USFWS, established a zoo-based breeding program using 14 wolves from the wild to restore the population. Our Zoo joined with other zoos and agencies to save the red wolf, breeding and reintroducing them in the wild. The species now has around 20 wolves in the wild, with around 250 in zoos ready for further release.

But guests can get nose-to-nose with the sculpture – and its interactive setting – right now at Red Wolf Woods.

“We wanted to incorporate Dale’s sculpture into Red Wolf Woods in a meaningful way that supports the artist’s goal to inspire conservation,” said Mette Hanson, the Zoo’s conservation engagement designer. “We already have actual red wolves, and there’s a lot of information for older children and adults. So we felt the sculpture could add a tactile element for very young children, to build on that empathetic connection in a new way.”

Directly above the sculpture is a screen playing a looping video of red wolf pups tumbling and squirming inside the real Red Wolf Woods den two years ago. It combines with the sculpture to tell a conservation story with images rather than words: ideal for young children.

“I like the idea of children being able to look at the red wolves on the level that they would actually be in real life,” commented Weiler on the design. “It’s a very cool idea.”

As a tactile work of art, though, “Just Settling In” can also tell the red wolf story in a powerful way to those who are visually impaired. Weiler has related one such experience where he saw a blind woman interacting with an alligator sculptures and began crying, saying she was finally “seeing” that animal for the first time.

To celebrate the sculpture, the Zoo Society will officially “unveil” it at their Cocktails with Curators evening event on Saturday, October 16 with Weiler and his wife Loti as special guests all weekend. The timing is perfect, marking National Wolf Awareness Week to highlight the art’s connection to protecting this critically endangered species.