It wasn’t the typical warm, clear March afternoon off the island of Hawaii, but Point Defiance Zoo & Aquarium team members Heidi and Mikiko had important work to do and bad weather wasn’t going to stop them. They were supporting research of the movements and habits of female scalloped hammerhead sharks (Sphyrna lewini) from the central Pacific distinct population segment of the species. 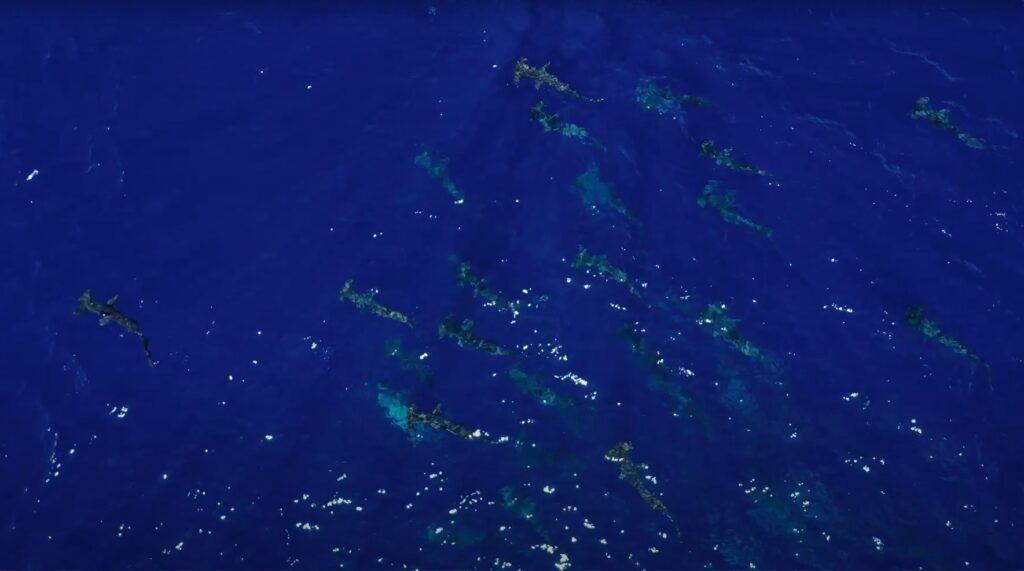 “Most of the population segments of scalloped hammerhead sharks are considered threatened or endangered,” explained Heidi. “But because this group of sharks is data-deficient, some experts believe they may be misclassified. It’s a concerning data gap that makes it more challenging to protect them.”

To date, there isn’t any published data showing the movement patterns of this group of scalloped hammerheads, including where they spend their time for 10 months of the year (April-January).

Since 2019, Point Defiance Zoo staff have supported researchers from the Hawaii Institute of Marine Biology and the Shark Lab at California State University, Long Beach in tagging some of the wild sharks with a tracking device that provides data over time. The goal is to get the appropriate protections in place– like an endangered classification if it is warranted– for the central Pacific population. That means long days on a boat searching for the hammerheads.

“Because the weather was windy and the water was choppy, it was difficult to spot them,” said Heidi. “We spent hours scanning the water hoping to see a black fin.” 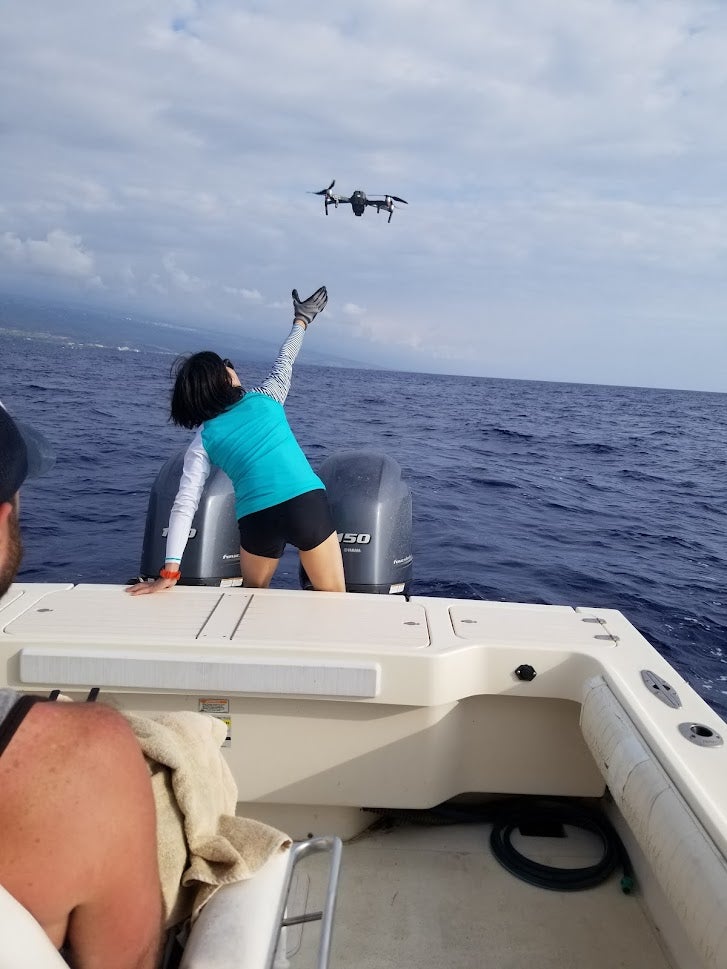 Even with the help of technology, like a drone, it still proved challenging to find the sharks.

“On a clear, sunny day a drone can see through the water, and dozens of hammerheads can be located,” said Heidi. “But cloudy weather makes it far more difficult to see, for both the drone and human eyes.”

And flying a drone on a boat isn’t exactly the easiest task: one crew member stares at the monitor for hours at a time hoping to see those black fins in the water (talk about being motion-sick!).

Fortunately, a drone wasn’t the team’s only tool. Over the past three years, the group has placed 17 acoustic tags and 12 satellite tags on female hammerheads. The acoustic tags connect with a receiver underwater, and any time a shark swims past that receiver, it collects data. That data is collected every six months for analysis.

“That data tells us where the sharks are going each winter and specifically where they are spending their days,” said Heidi.

“The data from the tags also gives insight about hammerheads that was previously unknown,” said Heidi. “Recovered data has shown record dive depths for the species.”

The research team has also hypothesized that hammerheads dive to deep depths to find food on the ocean floor at night, and swim along the surface of the water during the day to feel the warmth of the sun.

“This just proves how little is known about hammerhead sharks in the wild,” said Mikiko. “It’s incredible how patient scientists have to be to gather data on all wildlife.”

The satellite tags work differently and take longer to track. They pop off after the shark has traveled a certain distance. The tag then connects to a satellite, and researchers can see the GPS location of where the sharks may be spending their time in different seasons.

On this trip, it took two full days of searching for hammerheads before the researchers even saw them. 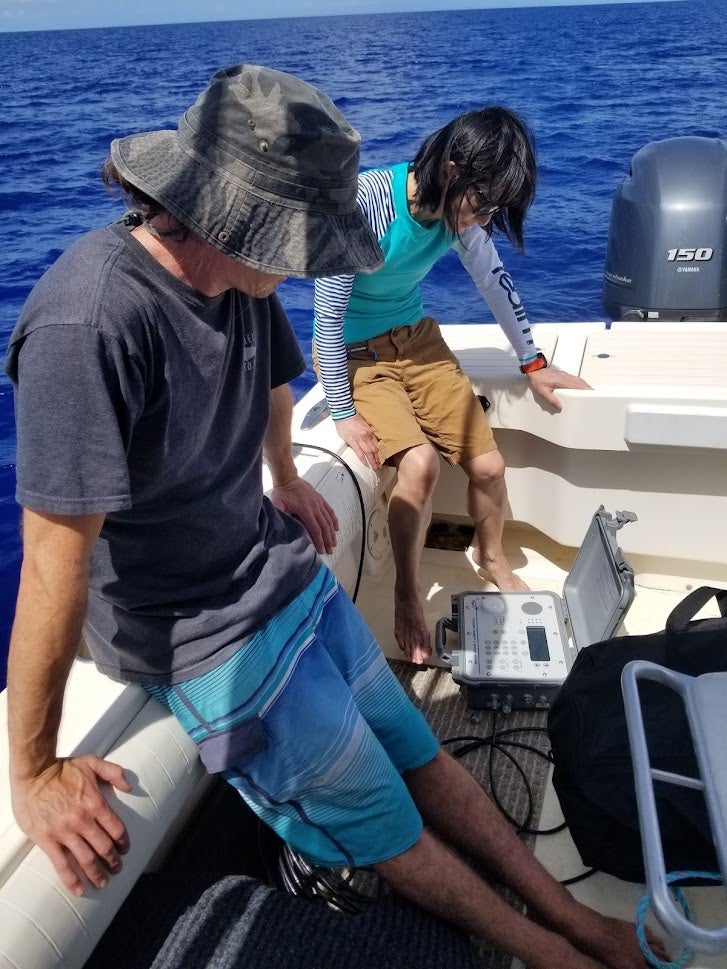 There had been very few sightings of the schools of hammerheads since January, so it was fantastic to find them at all!” said Heidi.

But before the celebrations could begin, there was work to do.

“We have to drive the boat very carefully so we don’t spook the pile of sharks,” explained Heidi. “Then a snorkeler jumps in the water, swims very fast to keep up with the sharks, and inserts a tag into the muscle under the dorsal fin using a pole sling.”

All that work, for just a few tracking tags. But over time those tags add up and contribute to vital scientific knowledge.

“To protect sharks, we need to understand their habitat and behavior,” said Mikiko. “We hope this work helps guide policy makers in making informed decisions about the conservation and management of this species.”

Now back in Tacoma, Heidi and Mikiko are looking forward to seeing what scientists find and then sharing the experience and knowledge with Zoo colleagues and guests.

“To be a part of this critical conservation project means so much to us,” said Heidi. “Guests at Point Defiance Zoo & Aquarium have the opportunity every day to forge a connection with sharks in the Pacific Seas Aquarium and help take action to protect them. Getting to be a part of fieldwork with the same goal is very rewarding.”