At the elephant habitat at Point Defiance Zoo & Aquarium, Shannon and Russell are doing something usually reserved for zoo visitors, not keepers. Side by side, phones held aloft, they’re taking photos of Suki, the zoo’s 56-year-old Asian elephant. Their angles are different: Shannon, assistant curator, is at least a foot shorter than Russell, staff biologist. But their goal is the same: Snap a total of 100 Suki photos each over the next few weeks.

Why? So that on the other side of the country, a computer algorithm can learn to recognize elephant faces around the world. It’s a multi-zoo project, eventually powering an app that could speed up research, protect elephants in the wild and help us all see elephants as individuals with deep connections to our own stories and survival.

“We are excited to be able to help with this innovative project, and provide additional support for elephant research and conservation,” says Telena Welsh, curator of Asian animals at Point Defiance Zoo & Aquarium. “The hope is that this research could help protect wild elephants. If Suki can help by acting as a model, that would be wonderful.”

“This project all began when I was researching elephants in Africa before my Ph.D,” explains Dr. Daniella Chusyd, postdoctoral fellow at Indiana University Bloomington, whose research focuses on elephant endocrinology and the connections between social and physical health. “Researchers who’d been there for years could identify hundreds of elephants at sight. But I would have to snap a photo out in the field, then flip through thousands of photos to find out who it was. I realized that if artificial intelligence could learn to recognize elephant faces the way it can do for humans, it would make research so much faster and easier.”

As she thought more about it, though, Chusyd kept seeing more value in a mobile app to recognize elephants. Rangers could use it to identify and protect elephants from poaching, and easily sort through thousands of images from camera traps. Researchers across elephant ranges could track movement. Safari tourists could identify elephants and learn their back stories, leading to greater empathy and conservation. In zoos, visitors could do the same.

Building such an algorithm, however, took collaboration.

“I have zero background in computer science!” laughs Chusyd. “But I connected with David Crandall, the director of graduate studies in computer science here at Indiana University. He was super-excited. He found some students to help work on it, and we got a Microsoft grant AI For Earth to use their platform Azure.” 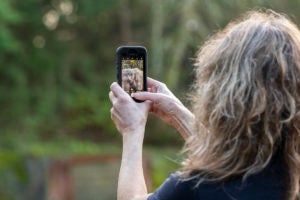 To recognize faces, however, a computer algorithm needs lots of faces to study. From the start, Chusyd realized that zoos would be the perfect partner: Unlike in the wild, their elephants would be easily identified, and more likely to stand still and allow facial close-ups from different angles. After beginning work with nearby Birmingham and Indianapolis zoos, Chusyd then switched to Asian elephants, bringing in eight zoos across the country: African Lion Safari in California, Cincinnati Zoo, Columbus Zoo, Houston Zoo, National Zoo, Oklahoma City Zoo, Tulsa Zoo and Point Defiance Zoo & Aquarium.

“Zookeepers are very busy, but this is not too taxing to do and it gets a lot of interest and support,” explains Chusyd.

“We’re always taking photos of Suki anyway, to monitor her health,” says Shannon. “So taking more for the app is easy.”

After receiving hundreds of full-length elephant photos, Chusyd and Crandall realized that the algorithm would learn much faster if they honed in on faces alone, minimizing other potentially confusing visual information (like a trunk in the air, or on the ground, or spraying water). Yet shooting on phone burst mode (multiple immediate photos) didn’t work – some variety was necessary to train the program. Chusyd sent detailed instructions to Shannon, Russell and other zookeepers: 100 photos each, from different zooms, angles and heights on different days. Include the whole head at least one complete ear. Helpers spend time on special software to trace around the face itself, cutting out any background and labelling photos. Chusyd pulls one set out of each batch to train the algorithm, the rest to test it afterward.

“I’m hoping in the next few months we’ll have a stronger algorithm and something tangible to show,” Chusyd says.

The final step – building an app to access the algorithm and database – won’t take very long, she estimates.

Then researchers, rangers and zookeepers can begin the process of linking individual elephant history, age, family, health and personality to their faces.

AI to save wildlife – and humans

Elephants are one of our planet’s most endangered species, victims of the ivory trade and human habitat development. African elephants have dwindled from some 12 million a century ago to just 400,000; Asian elephants from 100,000 to around 30,000-50,000. Could facial recognition – which is so ethically problematic for human use – help save elephants?

“That’s my hope,” says Chusyd. “Of course, it will be helpful for researchers like me. But when any person can recognize that an animal is not an object but a living being, they get more invested. The best way of doing that is through story.”

“I think it’s a great idea,” says Shannon. “If lay people use this app, that’s so many more eyes on wild elephants than ever before, which will help protect them from poachers. If people can track individual elephants, that’s even better. Getting local people to be part of the solution is important, because they live close to elephants every day. I see local school kids learning about them, doing projects. It’s wonderful.”

Recognizing elephants could even have deeper, broader implications for human health. Chusyd’s research connects elephant well-being to healthy aging: Elephants with early life trauma (such as a mother being killed by humans) suffer physically and psychologically, which can impact their health and aging.

“Elephants are very emotionally complex, very social,” states Chusyd. “That tapestry of their life is paramount to their well-being, as it is with us. I believe there is a lot we can learn from elephants to improve human health and well-being.”

And then there’s the connection between our health as a species and that of our planet, recently recognized by the CDC initiative One Health.

“We’re all intertwined, as Covid-19 shows,” sums up Chusyd.

After scanning 500 photos of Suki, does Chusyd plan on coming to visit? 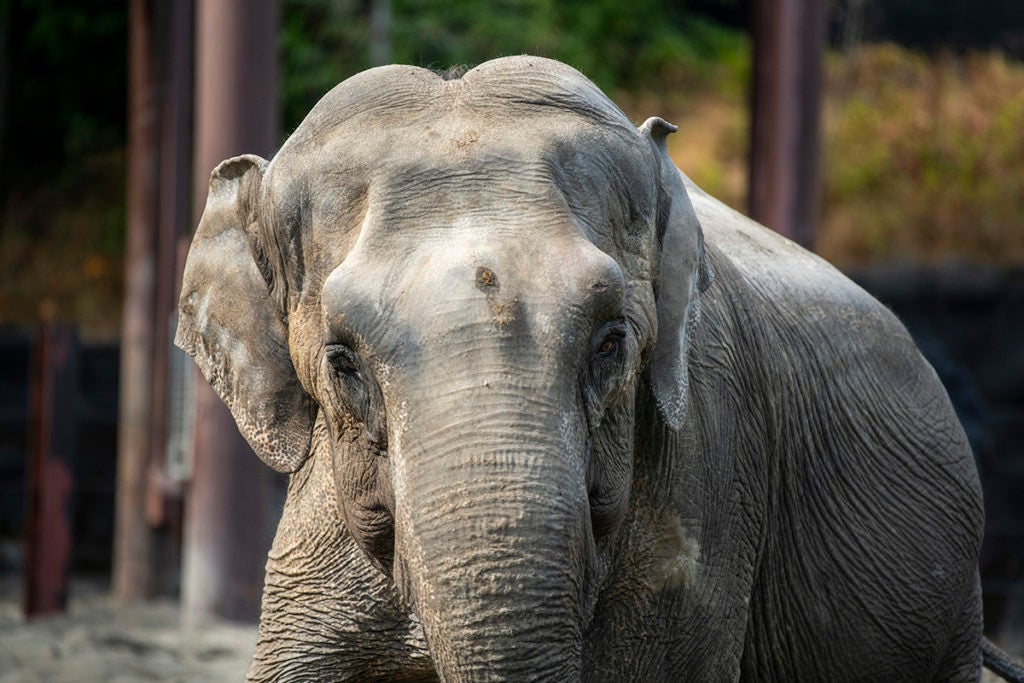 Previous Article
Next Article
labels:
You Might Also Like
Making Clouded Leopard Cubs
It was about as far away visually as you could get from a cute clouded leopard cub. Scientifically, though, it was the first step of the journey. As veterinary and … Continued
Learn More
AI for endangered tigers
Cross your paws. And think of tiger cubs! Our endangered female Sumatran tigers, 5-year-old Kali and 4-year-old Kirana, could be pregnant. Both were artificially inseminated Jan. 30 with sperm from … Continued
Learn More
See All Articles